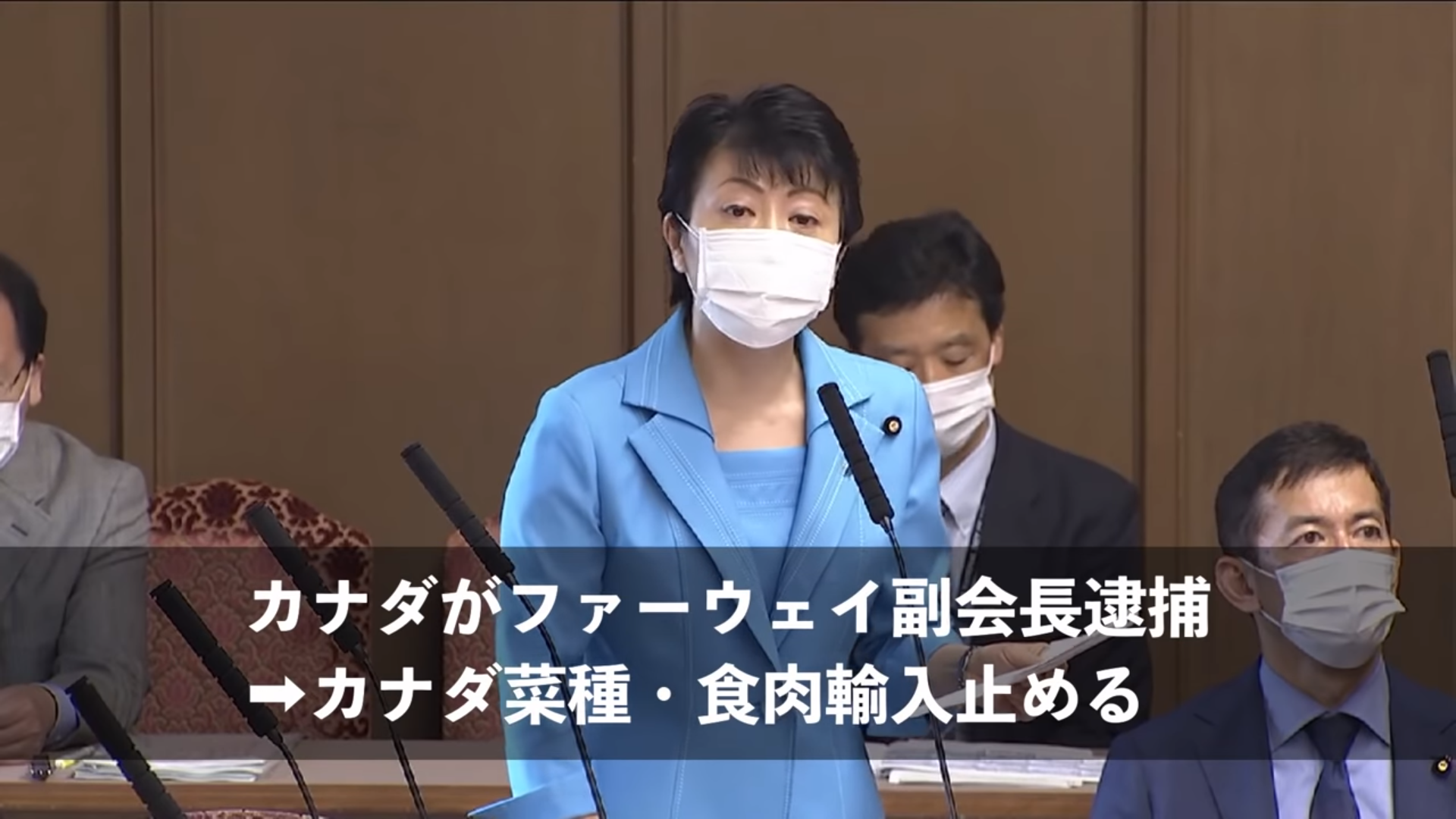 What happens in China is becoming more relevant than ever to Japan. First, it was the coronavirus epidemic. Then it was armed Chinese vessels intruding into Japan’s territorial waters around the Senkaku Islands. Yet, strangely enough, the Japanese National Diet never discusses China. It is this very abnormal state of affairs that previously prompted me to write about this subject.

I recently learned that, although a rare occurrence, China was once discussed in Japan’s National Diet. In fact, some very astute questions were posed at that time. The discussion was very short, with a sense of encouragement and, to be fair, I decided to report on it while calling for Diet members to do more.

The discussion about China took place in a meeting of the House of Councillors’ Committee on Financial Affairs on the morning of June 2. It started with remarks, followed by questions, on the subject of China posed by a member of the committee, Haruko Arimura (Liberal Democratic Party or LDP). The question-and-answer session in its entirety lasted only 24 minutes, making it a far cry from any authentic debate on the issue of China in the Diet. Still, any discussion on China is positive news.

Councillor Arimura was elected to the House of Councillors four times by proportional representation and is a veteran politician. She has Cabinet experience and has consistently voiced her views and recommendations on international issues and foreign policy.

At the outset of the committee discussion, Arimura brought up the subject of the novel coronavirus outbreak that has beset Japan, making it clear that it is a virus that originated in China:

The novel coronavirus calamity that has shaken the world has brought to light a variety of problems in our society, forcing us to accelerate structural changes. One major outcome is the task of monitoring how the country of origin of the pandemic, China, will react and behave. There is also the task of how Japan and the world will face China. These are structural challenges.

It is common knowledge around the world that the coronavirus originated in Wuhan, China. Yet no one has been willing to speak this simple truth in a straightforward fashion in the halls of the Japanese government. The same can be said for some parts of the media. Maybe they are trying to be considerate of China. But Councillor Arimura matter-of-factly stated this globally-recognized knowledge.

She also raised the Australian government’s official proposal to conduct an investigation into the origin of the coronavirus outbreak, which provoked a fierce attack from the Chinese government. Then she pointed out that Director-General Tedros of the World Health Organization has been strongly criticized for behavior that excessively favors China.

Her comments also included a warning on the Chinese government’s campaign in recent years to put people from their own country or countries under their influence in the top positions of international organizations related to the United Nations.

Ms. Arimura also astutely explained the Chinese government’s influence-peddling operations aimed at international organizations, and posed a question on how the Japanese government viewed the situation. Deputy Foreign Minister Keisuke Suzuki replied on behalf of the administration, saying, “We are paying attention to the situation, but are not implementing any concrete measures as the government of Japan.”

One aspect of its influence derives from the “Thousand Talents Program,” which is a Chinese government strategy aimed at improving its military and other technologies by enticing outstanding scholars and experts in science and technology from around the world. The program offers them extremely high salaries to bring breakthroughs to China’s research institutes. Multiple committees in the U.S. Senate have issued warnings about the program by saying it could lead to harmful leaks of American military technologies. In the United States, American researchers that have contact with the Thousand Talents Program are obligated by law to report their relationship to the U.S. government.

Councillor Arimura raised a question about the Japanese government’s approach on this point. In reply, a representative of the government explained that Japan has no similar requirement, and moreover that it has no information about the connection of Japanese researchers to the Chinese program.

Moving on, Ms. Arimura pointed to Japan’s long-standing ban on military research in the context of concerns over the military threat from China:

Despite the war of nerves between the U.S. and China, the Japanese Academy of Sciences has put a self-imposed ban on [the] study of advanced technologies applicable to Japan’s national security if it has possible military application.

In the meantime, Japanese experts, who were educated under Japan’s national education system that allowed them to absorb and come to grips with top technologies, are unimpeded in the transfer of their technological knowhow to other countries, even if it has military application. Then they are used by those other countries for advancing the heart of their national strategy. As a consequence, their work has come to threaten Japan’s national security, or hamper Japan’s corporate competitiveness and ability to develop advanced technologies.

The result is a threat to Japan’s security and the competitive power of Japanese industry, including development of advanced technologies, while the country’s defense capabilities are improperly weakened.

“If that’s the case,” Arimura added, “Japan’s power to protect the lives, health, and assets of its own citizens will drastically diminish.”

In this roundabout way, she voiced criticism of the double standards of the Academy of Sciences, and those in the Japanese government who condone it.

Lastly, Councillor Arimura expressed her opposition to the idea of inviting Chinese President Xi Jinping as a state guest, a plan that the Abe administration seems to still be pushing:

In all honesty, I have trouble comprehending why Japan is moving ahead while China repeatedly trespasses in Japanese waters off the Senkaku Islands of Okinawa and its threatening actions in chasing Japanese fishermen. All of this is going on during the coronavirus pandemic. Is this international cooperation? Is this Sino-Japanese friendship?

As Yasuhide Nakayama, chairman of the Foreign Affairs Committee of the LDP, appealed to the Prime Minister’s office just the other day (May 29), that unless there are improvements in the current state of affairs between the two countries, the voice of the Japanese people is that there are no grounds for welcoming President Xi Jinping with the highest honor of an official state visit, or an audience with the Emperor.

I would like it clearly noted in the proceedings that I, Haruko Arimura, have expressed the view that any official state visit should be carefully reconsidered until China responds in good faith befitting a superpower. I have no further questions.

More Japanese people should know that opinions such as hers are being voiced in our National Diet. As far as I know, this lawmaker’s statements have not been reported in the mainstream media.

(This article was first published in the online magazine Japan-In-depth on June 10, 2020. Click here to read the original article in Japanese.)