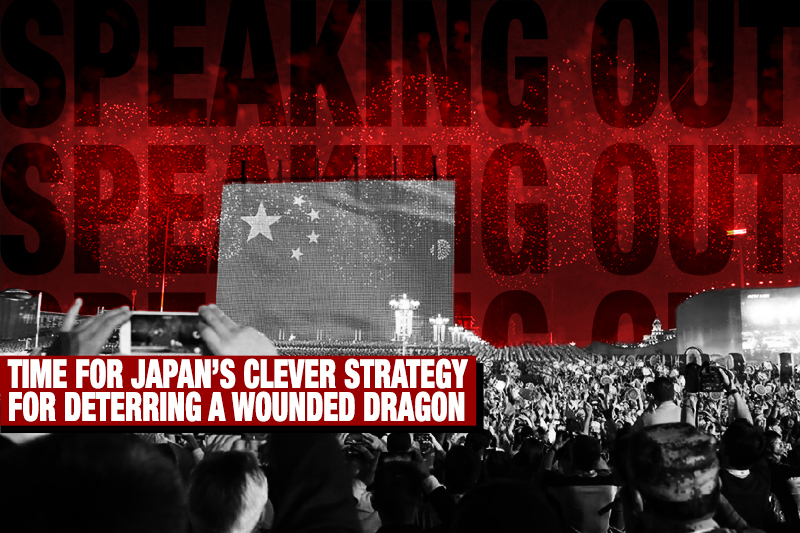 In his review of past pandemics, historian Niall Ferguson has pointed out that unknown viruses could intensify existing tensions between social classes and between nations. Chinese President Xi Jinping has been criticized at home and abroad for failing to prevent the Wuhan coronavirus from expanding. The wounded Dragon has grown brute to conceal his disadvantages, cracking down on Hong Kong, increasing military pressure on the Taiwan Strait, South China Sea, East China Sea, and escalating military tensions on the border with India.

Only the United States as a superpower can stop China. However, the Bald Eagle as leader of the Free World is fluttering his wounded wings, divided due to racial tension and wealth gaps. A white police officer’s killing of a black man has prompted citizens to vent their frustrations in a U.S. society fatigued with the coronavirus crisis. The strength of the United States facing a national crisis should be that people will be united under the president, but President Donald Trump’s remarks are now working to divide the country instead of uniting it.

U.S. social chaos is leading to a decline in the country’s leadership and unifying power in the international community.

Europe, which had viewed China only as a huge lucrative market, has awakened to the danger of China’s expansionism at last, resulting in an opportunity for patching things up with the U.S. Angered by China’s attempt to buy out British, French, and German high technology companies amidst the coronavirus pandemic, Europe is accelerating its breakaway from China.

Nevertheless, the U.S. is failing to take advantage of this good opportunity. When President Trump proposed a Group of Seven summit in the U.S. in June, German Chancellor Angela Merkel, at odds with Trump, refused to attend on the pretense of the pandemic disaster, botching the U.S. plan to demonstrate the Western unity at home and abroad.

The failure of the plan was attributed to Trump’s surprise proposal to invite Russian, Indian, Australian, and South Korean leaders to the “G7-Plus” summit. Prime ministers Boris Johnson of Britain and Justin Trudeau of Canada rejected the comeback invitation to Russia to the annual summit after Moscow annexed the Crimean Peninsula. Trump had no choice but to postpone the G7-Plus summit until September 2020.

Japan, situated at the forefront of deterrence against China, has a strategic opportunity to involve Europe and Southeast Asia, both of which have been remarkable in breaking away from China due to the pandemic.

The time has come for Japan, even without massive military capabilities, to plan a clever strategy to move major powers. In the past, Japan created the Asia-Pacific Economic Cooperation forum and led Australia to propose the APEC, achieving regional cooperation through the framework. The administration of Prime Minister Shinzo Abe devised a free and open Indo-Pacific strategy, leading then-U.S. Secretary of State Rex Tillerson to offer to become the promoter of the idea. The Hawaii-based U.S. Asia-Pacific Command was even renamed Indo-Pacific Command.

Japan now could build on the Japan-U.S.-Australia-India Quadrilateral Security Dialogue at the core of the Indo-Pacific strategy, expanding it into a Quad-Plus forum that includes Vietnam, Indonesia, Taiwan and others. On the economic front, Japan could persuade the U.S. and Europe to join the Trans-Pacific Partnership agreement, expanding the free trade pact into a TPP-Plus pact.

It is time for the Abe administration to show its competence and flexibility, and for Japan to implement its clever strategy.

(A version of this article was first published by the Japan Institute for National Fundamentals, Speaking Out #691, on June 18, 2020.)