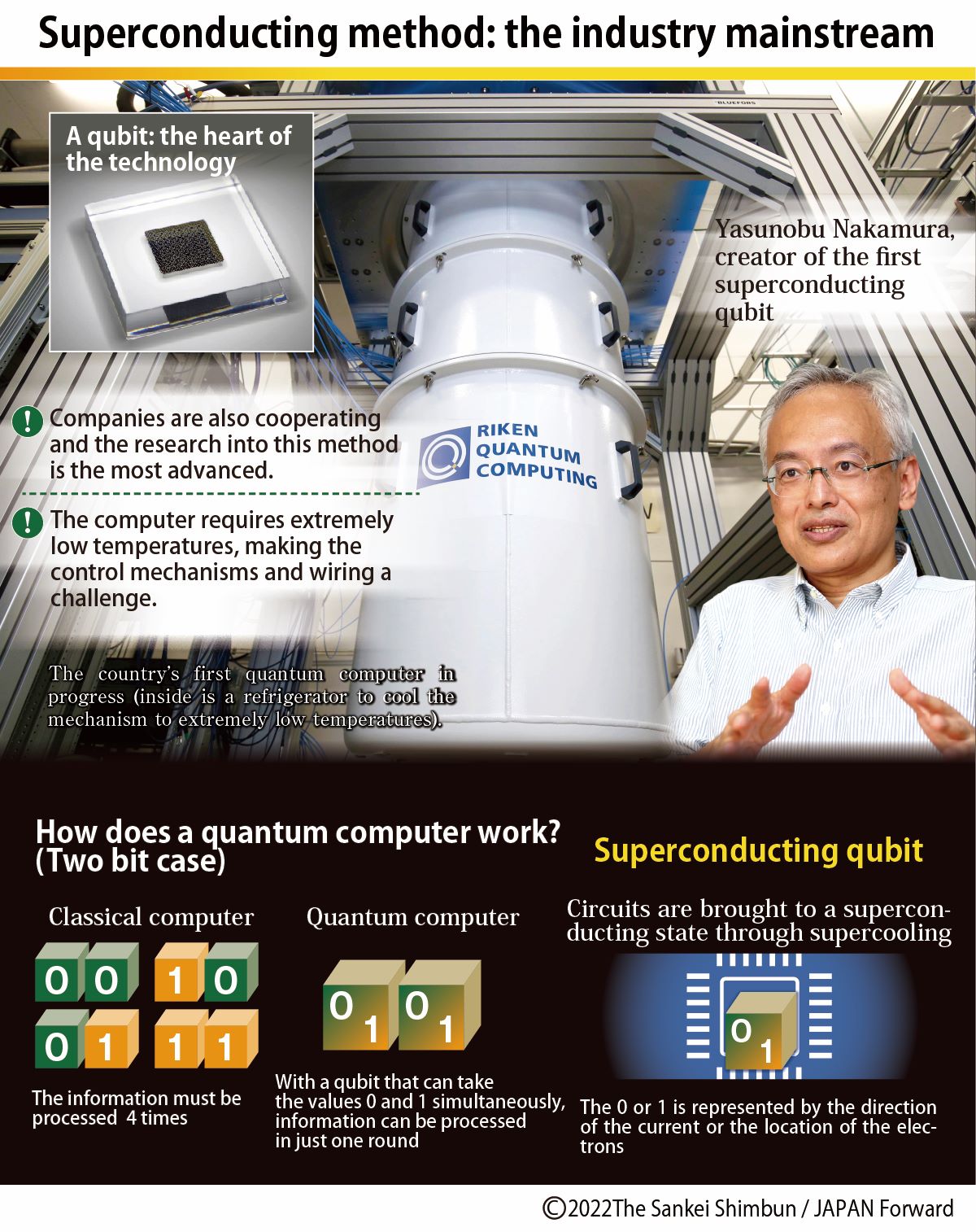 In Japan, the first domestically-produced quantum computer took a key step forward with a working model in December 2022. With it, the technology created by domestic researchers has emerged as a leading candidate for the realization of a full-fledged machine.

Quantum computers are expected to greatly exceed classical computers' ability to run large-scale, high-speed calculations, and across the world, there is fierce competition to develop them. Japan is becoming the site for research and development.

Wakoshi, Saitama Prefecture, is home to the RIKEN Center for Quantum Computing (RQC). It is here that development of the first domestically-produced quantum computer is moving forward. Yasunobu Nakamura, director of the RQC, is leading the development and aims for completion at the end of March 2023.

They are using the superconducting method. This is a mainstream method for creating quantum computers. It is also being adopted by large overseas companies like Google and IBM. In 1999, when Nakamura was working at NEC, he surprised the world by creating the world's first superconducting qubit. This is now the heart of the technology.

While a bit of a classical computer can only hold 0 or 1 as its encoded information, a quantum computer's qubit can be a superposition of both 0 and 1. Therefore, information can be processed simultaneously, allowing for ultra-high-speed calculations.

Superconducting quantum computers use electronic circuits that are brought to a superconducting state by cooling them to extremely low temperatures. In order to create this extremely-low-temperature environment, the issues of the size of the device and the complexity of the wiring must be considered.

The government's vision for the future quantum society, which was formulated in April 2022, states that the first unit would be installed by the end of that year. This vision calls the quantum computer "the department that is the most scientifically- and technologically-advanced."

The early development of a domestically-produced machine is essential in order to compete with the rest of the world in the battle for supremacy in science and technology.

The first machine will be a testbed for research and development of related technologies. Meanwhile, it will bring us close to the actual full-fledged quantum computer. Dr Nakamura said, "We've been requested to create a domestic computer that everyone can use as soon as possible. I think our collaborators will be the first to use it, but we would like to expand its application."

"We can conduct research on various levels," such as efficiently operating hardware for quantum computers. And we are creating software that demonstrates the strengths of quantum computing, says Dr. Nakamura.

At RQC, in addition to superconductivity, research into creating a quantum computer using photons and silicon is progressing. There are not many research institutes, even overseas, that have such a diverse selection of research areas.

Even if the methods are different, there are many common points in terms of technical issues, such as the task of controlling quantum states. Dr Nakamura points out, "We can learn a lot from each other, and we can aim for synergistic effects."

There has been a major issue in the development of quantum computers, however. That is whether the superposition state can be sustained in order to extend the life of the quantum bits that perform operations. In order to increase the number of bits and scale up, it would be necessary to put them in chip-form.

However, the optical quantum computer that Deputy Director Akira Furusawa is researching uses qubits that allow light to flow from one to the next. This eliminates a theoretical lifespan and the necessity of a chip.

Dr Furusawa expressed confidence in his method, saying that it solves the problems of conventional qubits, and that it is a "paradigm shift."

The optical quantum method uses phenomena such as "quantum entanglement" and "quantum teleportation." These were themes in this year's Nobel Prize in Physics.

Quantum entanglement, a special correlation between particles, manifests in the same way no matter how far apart the particles are. Quantum teleportation uses this property to instantaneously transfer information to a distant location. Dr Furusawa was the first in the world to succeed in fully demonstrating this phenomenon.

Since it operates in a room temperature environment and uses light, it is highly compatible with current optical communication technology.

One of Japan's specialties that can be expected to make a comeback is the silicon method. The qubits will be created using semiconductor technology. This project is being led by Seigo Tarucha, who leads research at both RQC and the RIKEN Center for Emergent Matter Science.

Electrons are confined to the semiconductor's thin film by the electric force. The spin of an electron is a property that is comparable to a magnet, and is represented by a 0 or a 1 depending on the direction of the magnet.

Compared to other methods, there is a delay in establishing the control mechanisms, and it is still limited to a few bits. However, Dr Tarucha and his group recently succeeded in performing basic computational operations and correcting computational errors.

Once the basic technology is solidified, it's possible that existing technology to integrate semiconductors can be applied. If so, then commercialization can begin.

For this, Dr Tarucha points out that cooperation with companies is crucial.

His goal is to reach the range of 100 to 1000 qubits by 2030. And by demonstrating that this can realistically be scaled up, "I would like to encourage companies to enter the field," he says.

The reality is that at the moment, there isn't a particularly leading method for realizing a quantum computer. In addition to the methods being researched by the RQC, Japanese companies are making a presence in fundamental research. And Japan's strength is its diverse human capital.

Expectations are rising for the progress of the Japanese quantum computer toward the realization of a quantum nation.

(Read the report in Japanese.)