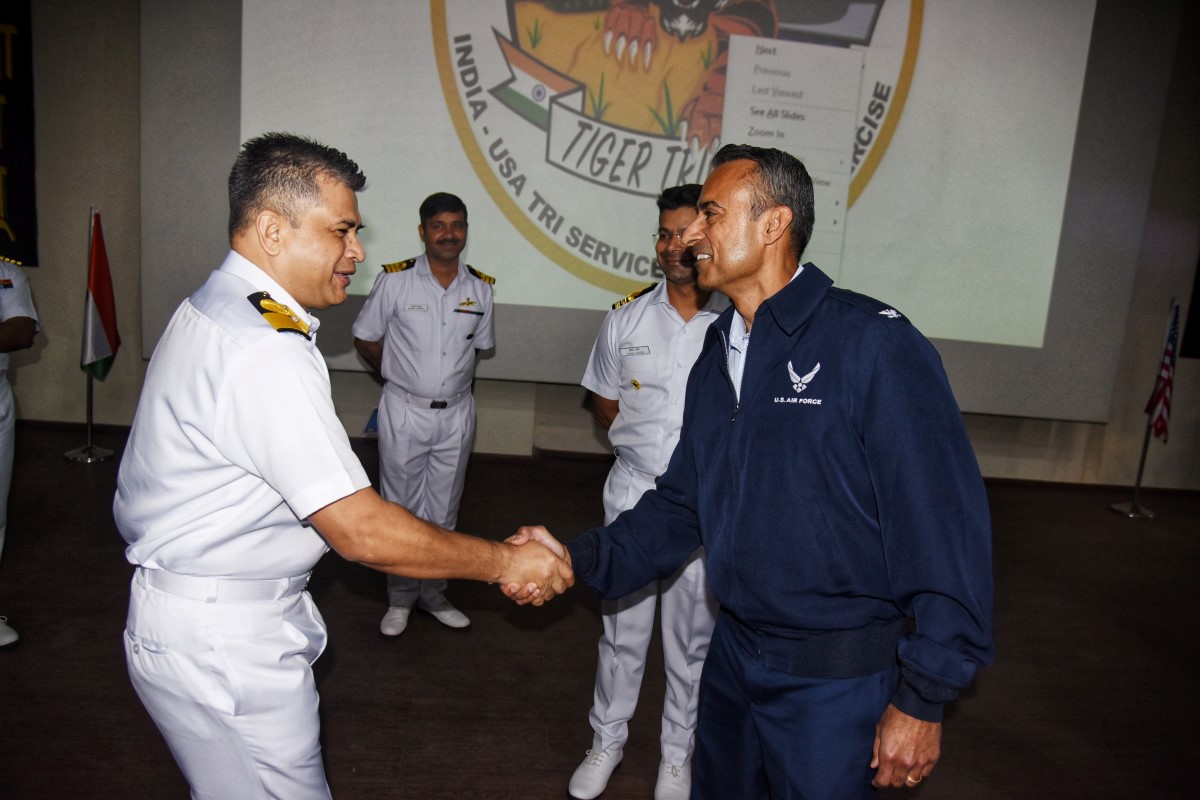 US and Indian commanders greet each other for the 2022 Tiger Triumph exercise on humanitarian assistance and disaster relief. (Indian Eastern Naval Command, Twitter)

The United States and India have been holding a variety of military exercises in recent years. Apart from these regional defense exercises, the two countries' militaries have also been cooperating in the realm of humanitarian assistance and disaster relief (HADR).

As a part of these initiatives, the second edition of the India-US bilateral tri-services "Tiger Triumph" exercises were held in October 2022 off the coast of Vishakapatnam in Eastern India.

These exercises were first held in 2019. As noted in an American press release issued on the occasion, "the Indian and US military and diplomatic representatives coordinated a joint response to provide disaster relief services to a notional third country that experienced a super-cyclone"

Significance of the Humanitarian Exercises

So, why are these HADR exercises important?

First, the two countries are collaborating in the Indo-Pacific in a manner like never before.  The US, India and Japan are a part of the trilateral Malabar naval exercise.

Earlier in February 2022, the US Navy also took part in the Indian Navy-led Exercise Milan for the first time. These kinds of exercises bring around a high-level of coordination between the different wings of the armed forces of the two countries.

This time, the purpose of the HADR exercises was to "consolidate interoperability and validate procedures for conducting amphibious HADR operations in the aftermath of a natural calamity".

Third, unlike in the past, India is buying an increasing array of American-made weaponry. This is increasing the interoperability between the armed forces of the two countries.

The two countries have signed a series of agreements like the Logistics Exchange Memorandum of Agreement (LEMOA), the Communications, Compatibility and Security Agreement (COMCASA), and the Industrial Security Agreement (ISA). It is worthwhile to note that defense sales from the United States to India have skyrocketed from near zero in 2008 to over $20 billion USD in 2020.

In addition, in 2018, India was elevated to Strategic Trade Authorization Tier 1 status. This has allowed New Delhi to receive license-free access to a wide range of military and dual-use technologies.

Major Player in the HADR Arena

India is now turning out to be a global leader in the field of HADR operations. In addition to responding to natural disasters, it rescued many of its nationals and those from other countries when they were stranded in Yemen in 2015 following the outbreak of hostilities in that country.

The present government has put a lot of emphasis on its Diaspora. And in the case of countries like Ukraine, where there were at least 20,000 Indian students, the government has mounted massive rescue efforts.

India’s Andaman and Nicobar Islands are crucial for undertaking HADR operations in the Indian Ocean region. Besides, India has also participated along with the BIMSTEC (which includes India, Bangladesh, Nepal, Bhutan, Sri Lanka, Myanmar and Thailand) countries in the field of HADR activities.

Japan is a global leader in the field of humanitarian assistance, with experience dealing with natural disasters, both inside the country and outside. Many countries in Japan’s neighborhood, such as the Philippines, are prone to natural disasters.

Japan has played a leading role in providing relief there and elsewhere. It has also deployed SDF personnel in the case of the 2004 Boxing Day disaster which struck countries bordering the Indian ocean. It did the same during the 2013 Typhoon Haiyan in the Philippines.

Earlier in January 2022, the Government of Japan decided to provide Emergency Grant Aid of $13 million USD to the Philippines to help recovery from damages caused by Typhoon Odette.

Besides, as a part of the Quadrilateral Security Dialogue (Quad), India, Japan, the United States and Australia have been cooperating in the realm of disaster relief.

It was in 2019 that the Indian Navy deployed two ships ー INS Sahyadri and INS Kiltan ー to support Japan’s disaster relief efforts in the wake of typhoon Hagibis. These ships were already in Japan for a trilateral naval exercise involving the United States, Japan and India.

Earlier in 2022, the foreign ministers of Australia, India and Japan and the US Secretary of State met in New York in September and signed into operation the Guidelines for the ‘Quad Partnership on Humanitarian Assistance and Disaster Relief (HADR) in the Indo-Pacific.

The US and Japan have coordinated for a long time in the field of HADR. It was in the aftermath of the Great East Japan Earthquake of March 2011 that the launch of "Operation Tomodachi" with the US led to a big turnaround  in the coordination between the militaries of the two countries in responding to natural disasters.

Successive American administrations have emphasized the Indo-Pacific, starting with the change of name of the US Pacific Command to the US Indo-Pacific Command in 2018. Besides, there is immense potential for India and the US to coordinate their efforts with Japan in the HADR realm.

In the years ahead, there will be increasing cooperation between countries like India, Japan and the United States in the HADR realm as well. The latest India-US "Tiger Triumph" exercises are a step in that direction.

Dr Rupakjyoti Borah is a Senior Research Fellow with the Japan Forum for Strategic Studies. The views expressed here are personal. His latest book is The Strategic Relations Between India, US and Japan: When Three is not a Crowd (World Scientific, Singapore).