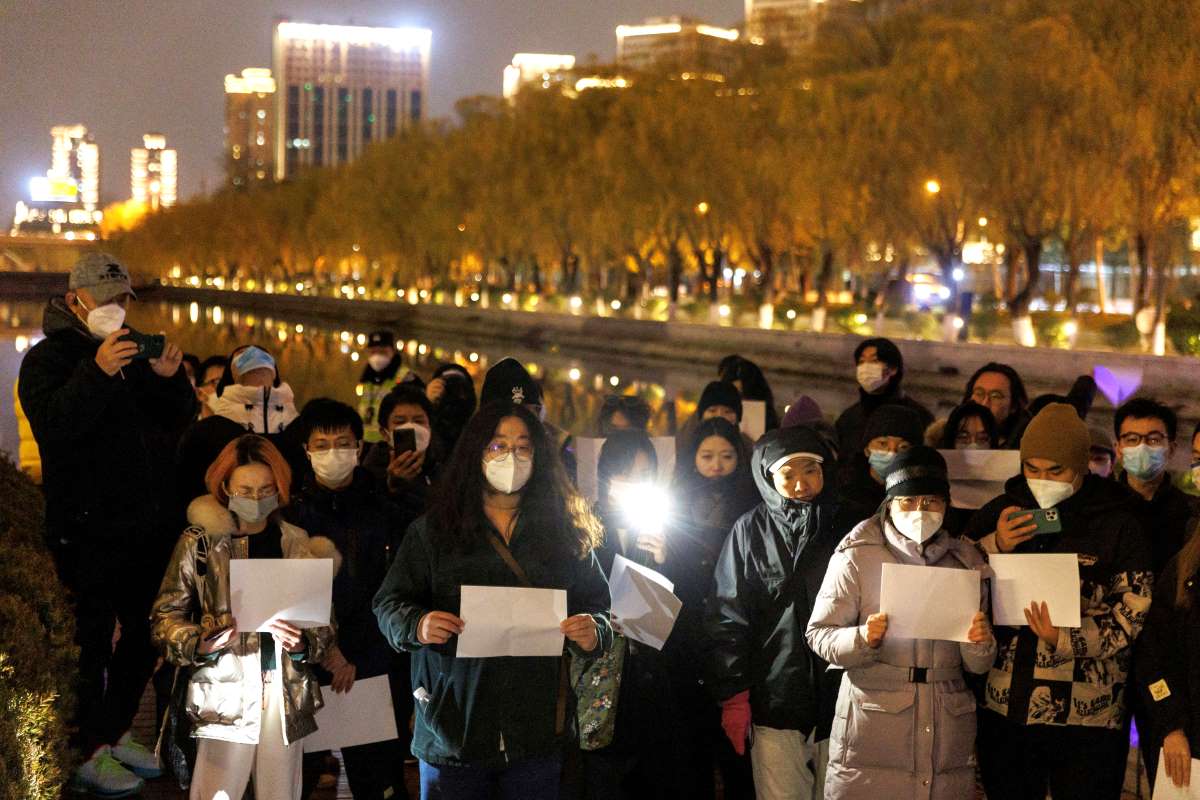 A crowd holds up white sheets of paper in protest of Beijing's zero-COVID policy in Beijing, China, on November 27, 2022. (©Reuters/Thomas Peter)

Xi Jinping has secured an unprecedented third term for at least another five years as head of the Chinese Communist Party (CCP) in the National Party Congress held in Beijing in October 2022, despite his zero-COVID lockdowns. In doing so, he has managed to defy decades-long CPP tradition of avoiding an over-concentration of power in one person.

However, in a completely unexpected and shocking turn of fate, this is turning out to be an anti-climax for Xi. Going by the recent statistics of China's record COVID-19 cases and the exploding scenario of COVID-19 infections across China, Xi for once, appears clueless regarding an exit strategy from the domestic mess on his hands.

The protests witnessed across China in November 2022 were rare to say the least, particularly in the Xi era. Citizens of China openly came out against his zero-COVID policy. And the protests spread across China's diverse cities and regions for days in succession.

The symbolic holding up of a blank white sheet of paper by hundreds of protestors – be it in Beijing or Shanghai, supported by the cacophonic sound of many horns, brought the world's attention to the harrowing condition of people residing inside China.

The trigger for the unprecedented protests across China was a fire in a tower block in the city of Urumqi. It killed 10 people in the remote northwest Xinjiang region.

The victims reportedly were unable to escape due to the strict zero-COVID lockdown policy.

The incident brought to light the barbarism of state authorities – thus sparking a wave of protests such as China had not witnessed in years. Not since the June 1989 Tiananmen Square student-led demonstrations in Beijing had China been faced with such public anger. Sadly, the Tiananmen protests resulted in a human massacre that the world still remembers.

Xi Jinping and His Loyalists

The public expression of dissent against Xi Jinping's strict zero-COVID policy has sent tremors of disbelief through the CCP leadership and its leader.

This comes in the backdrop of a Standing Committee of the all-powerful CCP Politburo which is packed with Xi loyalists. It appears that loyalty to Xi is the highest political priority today in China, aided by the fact that there are no challengers to Xi's hold on power.

Ever since Xi Jinping took over the reins of China in 2012, he has pursued a despotic and hardline agenda within the CCP. For a decade now, politics in China has been replete with instances where Xi's vision has become central to China's future.

When Xi Jinping firmed up his apparent position as China's most powerful generational leader in October 2022, few would have thought of the extraordinary chaos that was about to follow.

Since the global outbreak of the COVID-19 pandemic in 2020 – and the controversy over its origin, namely, in the city of Wuhan, China, the global death toll from COVID-19 has reached a distressingly mammoth 6.72 million and counting.

In my May 2021 JAPAN Forward column, I questioned "What Did China Make in the Wuhan Lab?" There have been multiple calls to declassify information and intelligence relating to the origin of the COVID–19 virus, and its potential links with the Wuhan Institute of Virology (WIV). From managing to scuttle the WHO investigation in Wuhan, to obfuscating discussions and enquiries into the Wuhan lab, China has much to answer and repay the world.

Throughout these nightmarish three years for humankind, Xi Jinping has maintained a brutal and draconian zero-COVID policy at home. This policy resulted in locking down entire neighborhoods across mammoth cities for months in succession. Under the severe controls, many people were forced into quarantine camps.

Today, China's healthcare system, which caters to the country's 1.4 billion population, is collapsing. It is under pressure and overwhelmed with incoming patients who have been infected in the waves of virus that have swept the nation.

A Disaster of His Own Making

From being the one-man dictator of a nation descending further into autocracy, what a turnaround it has become for Xi Jinping. The world has failed to bring China to book for the global spread of the virus originating from Wuhan. Meanwhile, unconcerned, the CCP gave Xi a historic third term with limitless power.

Ultimately, the people of the People's Republic of China spoke. While the world seemingly displayed an ambivalent posture towards China during the humanitarian havoc, China's own citizens took the responsibility of speaking [read screaming] truth to power. This is what the Zero-COVID protests in China have demonstrated.

There appears to be no concrete exit strategy from the COVID chaos. In its wake, the latest wave that has gripped China could well be the beginning of a further domestic disaster.