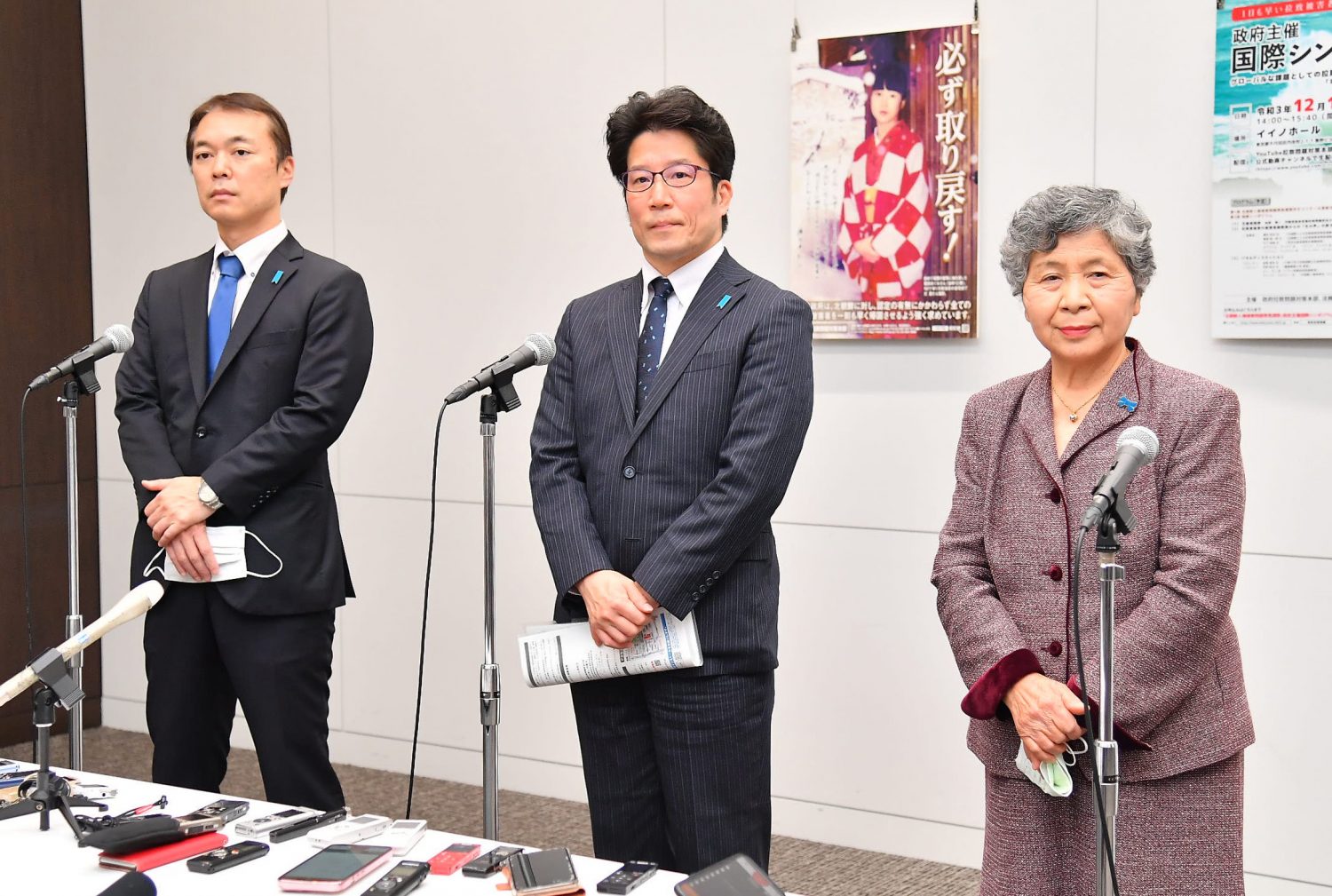 Iizuka Koichiro (left) and Yokota Takuya (center) now lead the Association of Families of Victims Kidnapped by North Korea. Standing with them is Takeshita Tamaji (right), representing the families of missing persons in which the possibility of abduction by North Korea cannot be ruled out.

Quietly and with a steady hand, the Association of Families of Victims Kidnapped by North Korea (AFVKN) marked a generational change in its leadership on Saturday, December 11.

Yokota Takuya, whose sister Megumi is a victim of the abductions carried out by agents of the North Korean regime, was selected as the new representative of the families. As the third representative of the organization since its inception in 1997, he expressed firm determination on realizing the goal of bringing home the victims and fully resolving the abductions issue.

He is joined by another member of the younger generation, Iizuka Koichiro, who will take over as secretary-general of the association. It is the position Yokota held until his new appointment as lead representative. Iizuka is the son of Taguchi Yaeko, who was abducted by North Korean agents around June 1978, leaving behind her one-year-old son, Koichiro.

The new representatives spoke to the press following the December 11 International Symposium sponsored by the Japanese government related to North Korean Human Rights Abuses Awareness Week. Emphasizing that there is no time to waste as the families and victims are aging, Yokota and Iizuka made clear their deep personal commitment and the continuity of purpose of the family members to bring home all of the Japanese abductees.

Expressing appreciation for the efforts of the Japanese government in reaching out to other countries, they echoed the government’s priority of global cooperation. The trilateral of the United States, South Korea, and Japan will be key to resolving the abductions with North Korea, Yokota said, in part because that is where North Korea’s focus lies. He also affirmed their appreciation for the continuing cooperation of Japan’s other partners — such as Australia, the European Union, the United Kingdom, and Canada — who have stepped up repeatedly in the United Nations and elsewhere with Japan on the issue.

Iizuka joined Yokota’s comments, adding that to speed resolution of the abductions, a human rights issue, it would be preferable to see the issue addressed separately from the problems of North Korea’s nuclear and missile development. Professor Nishioka Tsutomu, chairman of the National Association for the Rescue of Japanese Kidnapped by North Korea, commented that it might be possible to do so, without obstructing Japanese and multilateral efforts on the security issues.

Yokota and Iizuka reported the change to Mr. Matsuno Hirokazu, Chief Cabinet Secretary and Minister in charge of the Abduction Issue on December 11, following a special meeting of the AFVKN family members earlier that morning. The generational change was announced at the government sponsored seminar.

Both Yokota and Iizuka are veterans in the struggle to repatriate their loved ones. They have traveled to the United States, South Korea, and Europe, and participated in international symposia in the Japanese government’s global appeal for cooperation to resolve the issue.

Yokota Takuya succeeds Iizuka Shigeo, elder brother of Taguchi Yaeko, who raised his sister’s son Koichiro as his own after her abduction. Iizuka Shigeo stepped down as head representative of the families’ organization after 14 years due to poor health. In turn, Iizuka Shigeo was preceded by Yokota Shigeru, who led the group during its first 10 years.

With similar continuity of purpose, Japan also welcomed a new head of government on October 4, as Kishida Fumio was elected Prime Minister of Japan. PM Kishida immediately made it clear that his government will pursue international cooperation for resolution of the abductions by North Korea with every bit as much vigor as his predecessors.

As if to punctuate the national unity on the resolve to immediately bring home the Japanese abductees, members of Japanese opposition parties joined the Kishida government and families of abductees at the December 11 seminar. Among them was Izumi Kenta, the new head of the largest opposition party, the Constitutional Democratic Party of Japan.

You can learn more about the Association of Families of Victims Kidnapped by North Korea (AFVKN), the Japanese government’s efforts and other details of North Korea’s abduction of Japanese citizens in articles found here and here. See the 2021 International Symposium related to North Korea Human Rights Abuses Awareness Week here.