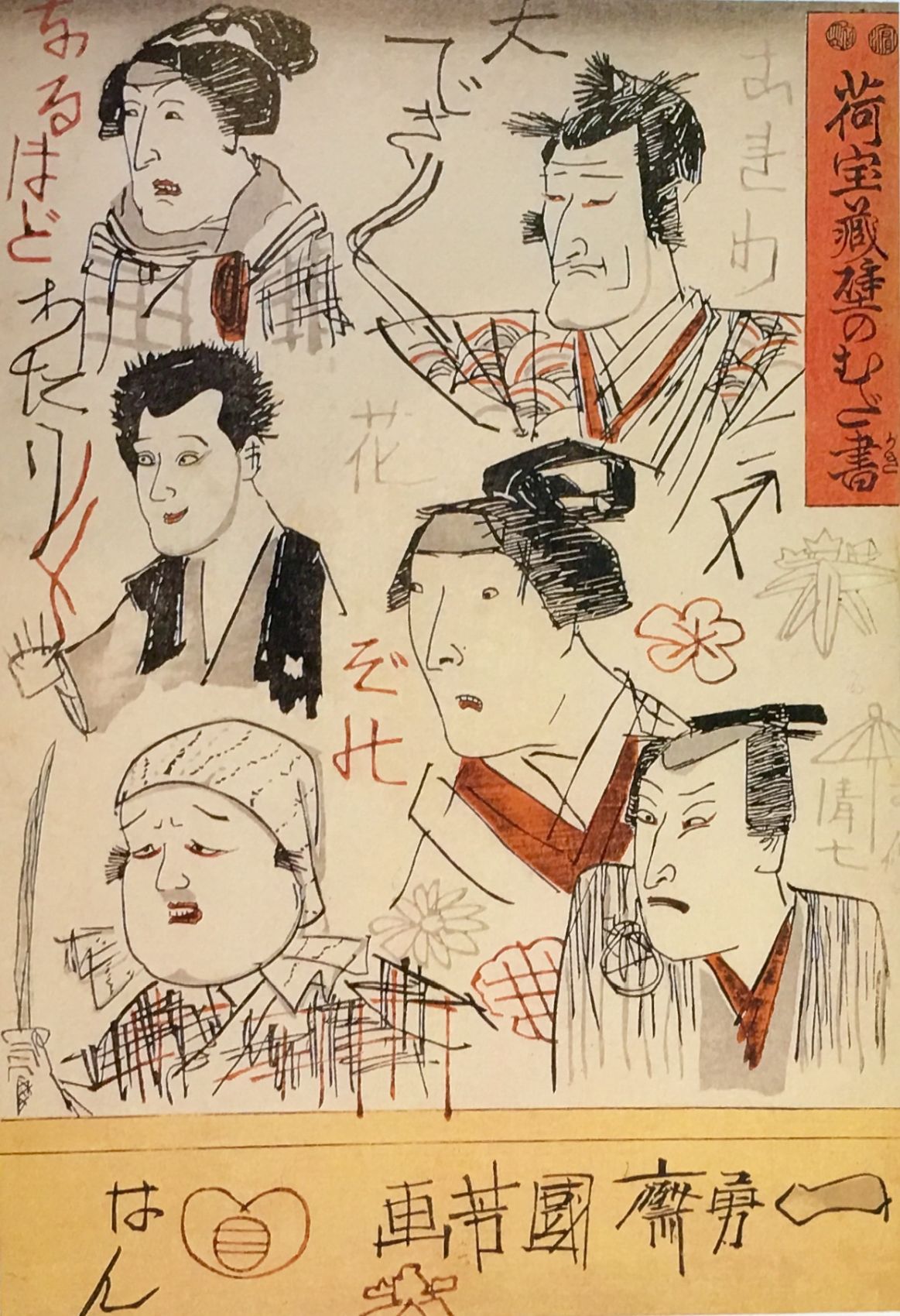 (Part 6 of a Series on the Art of Kuniyoshi)

Kuniyoshi was an artist who drew pictures in many genres.

He was particularly skilled in a genre of playful caricatures and sketches known as giga. From satirical images poking fun at the Edo government to more innocent pictures, Kuniyoshi’s works contain a unique flavor, and no ukiyo-e artist rivaled him in this genre.

Commoners applauded images by Kuniyoshi that ridiculed the Edo government, and he had been called an anti-establishment artist. However, considering that publishers decided which themes artists could depict, it is hard to assert with certainty that Kuniyoshi drew such works with a political motive.

If someone of high rank, for instance, said, “There appears to be a votive tablet at Sensoji drawn by Kuniyoshi that I want to see,” Kuniyoshi would be delighted and invite his pupils to celebrate with festival red rice.

In an episode like this, Kuniyoshi might appear to be a rather simple-minded person, but it reflects his personality as an Edo native. More accurately, he must have acted this way because he was an Edoite.

However, if you believe Kuniyoshi’s caricatures are simple-minded, you are mistaken. Since ancient times up to now, the Japanese have created satirical animal images and sketches known as giga. Among these images are the famous Choju-giga — caricatures of frolicking birds, animals, and humans.

Giga is an important genre of Japanese art. In particular during the late Edo period, a culture of humor reached its zenith, with Kuniyoshi as one of its main representatives.

I would like to introduce some of Kuniyoshi’s typical giga prints.

First, let’s have a look at Storehouse of Treasured Goods: Scribblings on the Wall.

Today we call them Hetauma, which means “poor but good,” to describe a picture that seems poorly made but captivates us. But can you imagine that many unusual, graffiti-like ukiyo-e prints suddenly appeared during the Edo period (1603-1868), which did not resemble their subject even in the slightest?

As the title of Kuniyoshi’s work suggests, this picture depicts facial likenesses of kabuki actors that have been scribbled on a storehouse wall. As Kuniyoshi’s idea was something completely different, drawn like a mischief maker, the publisher accepted it and gave permission to have it published.

When the carver saw the sketch, it must have been a bewildering image. Normally Kuniyoshi would only send him excellent sketches, but this time a rough graffiti-like sketch had reached his workplace. Nevertheless, the carver understood Kuniyoshi’s intention and responded to his demands in a splendid manner.

When carefully looking at the work, you’ll find many hidden details and realize it’s a rather profound work. 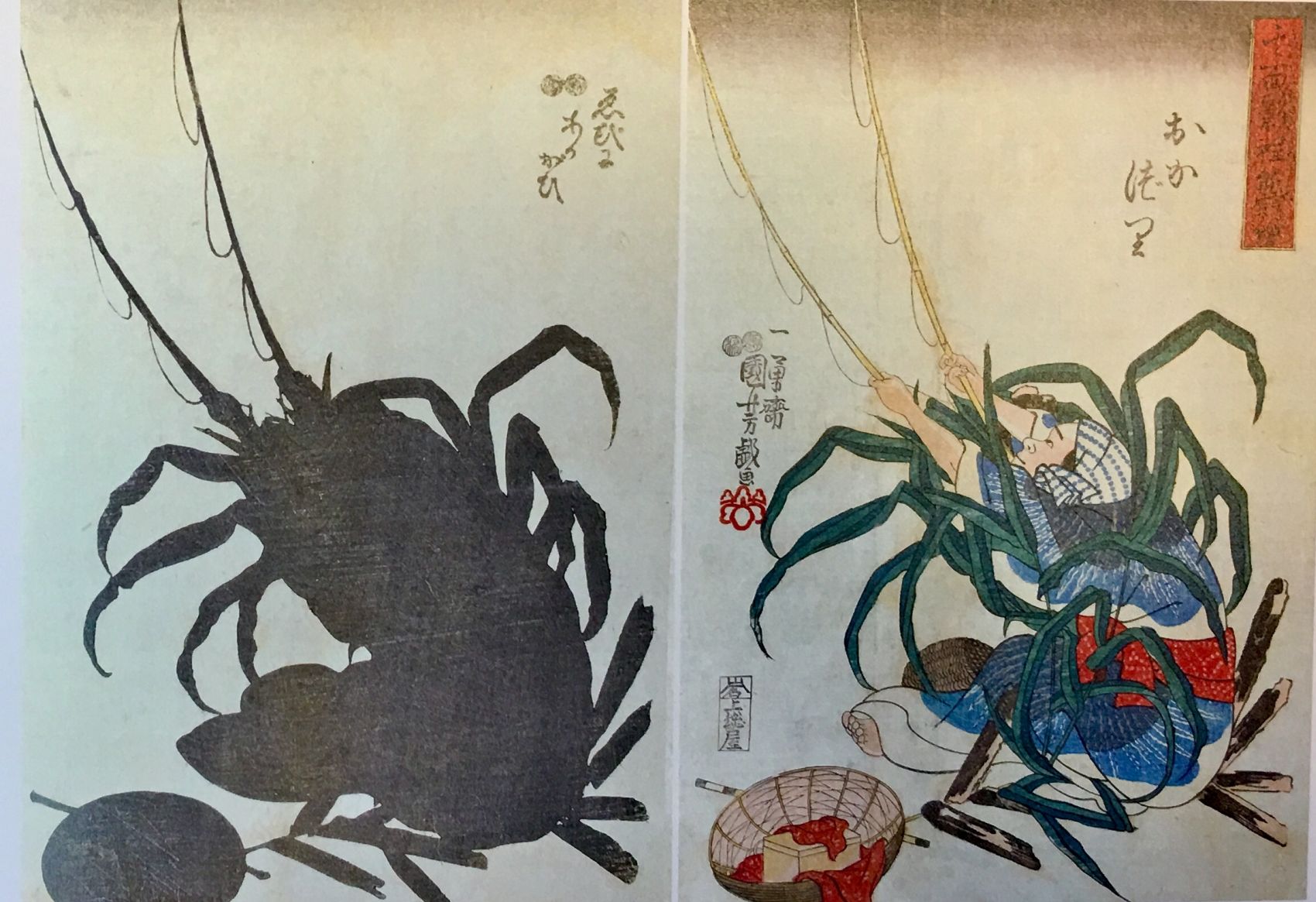 The next two pictures are part of a series that comes in pairs: Lobster and Shellfish from the series Lingering Traces in Excellent Shadow Pictures.

While this kind of silhouette-picture exists in various parts of the world, it already existed in Japan more than 150 years ago. The fact that it includes both a shadow and a “true image” makes it an astonishing series.

Also, while Lobster and Shellfish already forms an interesting print in itself, and many similar shadow images appeared at the time, the true image behind the shadow, revealed in Fishing from the Shore — consisting of a fisherman feeling a strong tug on the line seated among leaves — makes it an even more engrossing series. It was made between 1847 and 1852, Kuniyoshi’s most active period in terms of quantity.

Kuniyoshi’s love for cats is well-known, but he loved not only cats. He also loved human beings. Indeed, he loved all living creatures. For this reason, many animals appear in his works.

There is probably no ukiyo-e artist who drew as many animals and other living creatures as Kuniyoshi. When trying to select a personal favorite from Kuniyoshi’s prints, you’ll see how many images he drew of animals and how fond he was of them. 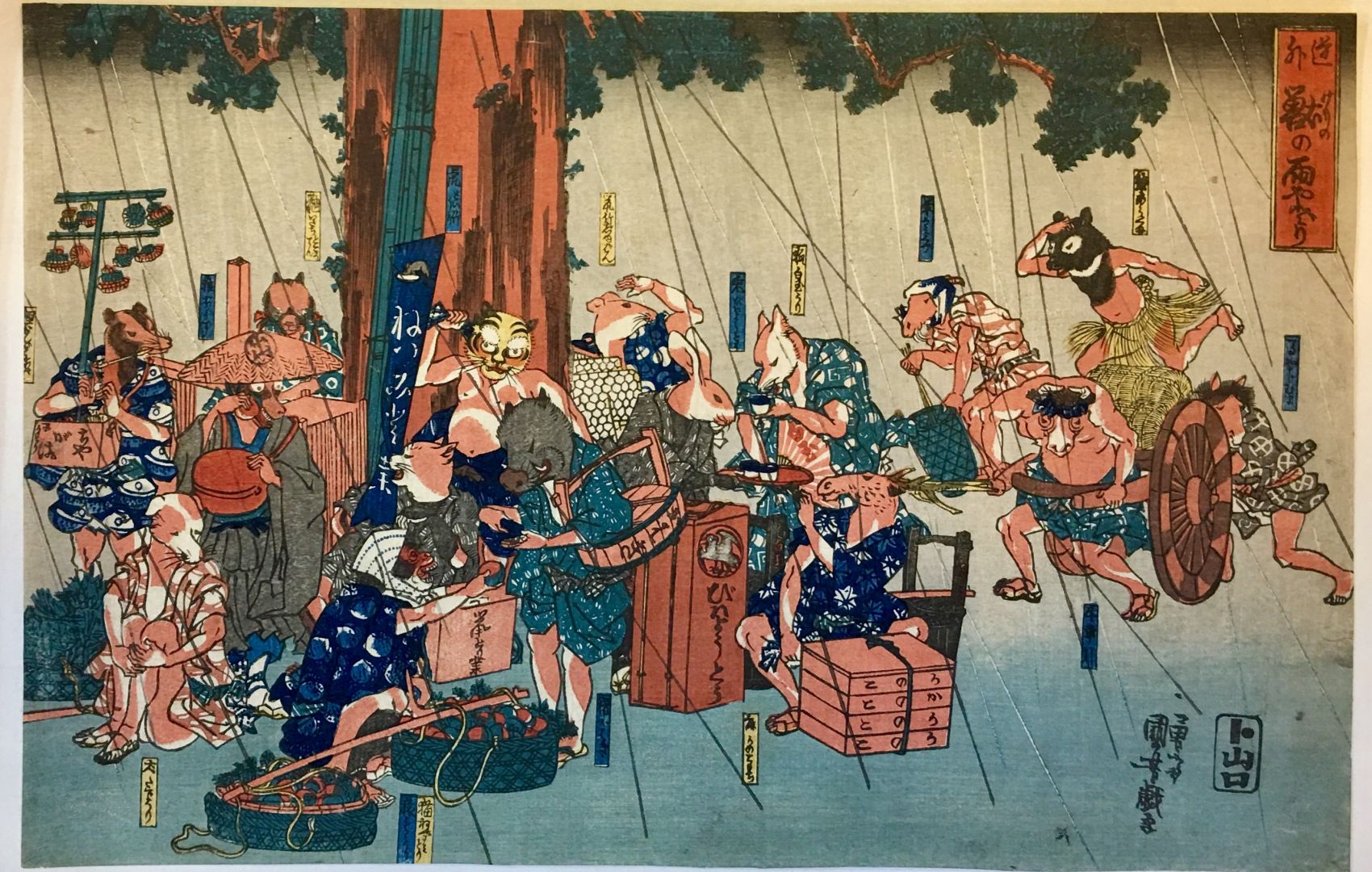 The final print I’d like to show you is Animals Taking Shelter from the Rain from the series Clowning Around. This print also features animals as protagonists.

Ukiyo-e artists have always loved to depict people sheltering from the rain. In such pictures, people were no longer divided by class distinctions as they gathered under the same roof to avoid getting wet.

The theme must have stimulated Kuniyoshi’s creativity. In this version, the figures sheltering from the rain are not human beings but animals. Yet at the same time, the animals have been depicted as practicing all sorts of professions, making it a highly amusing image.

Even the patterns of the kimonos have been designed to match the animals in this picture. It’s the finishing touch within Kuniyoshi’s marvelous art.