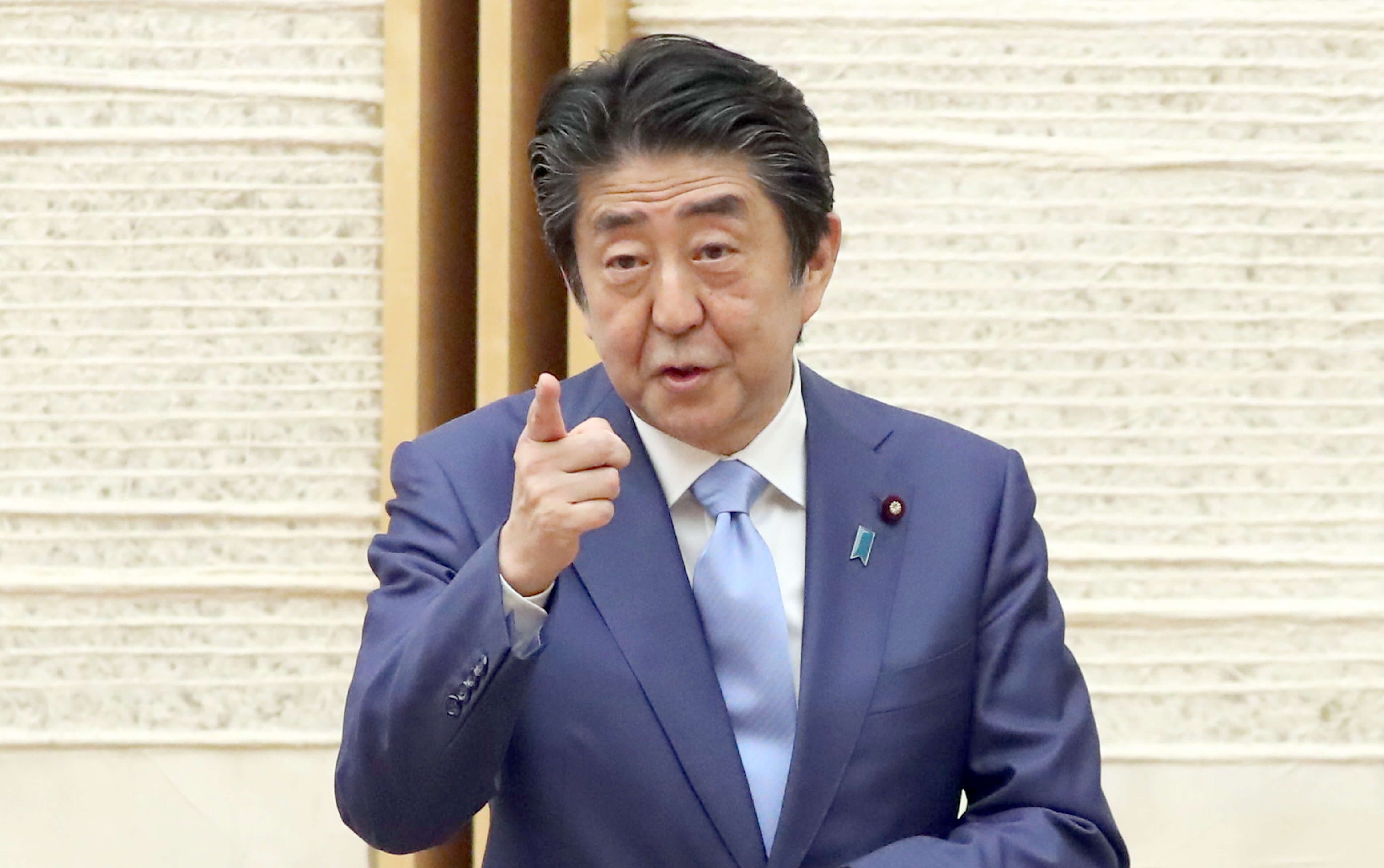 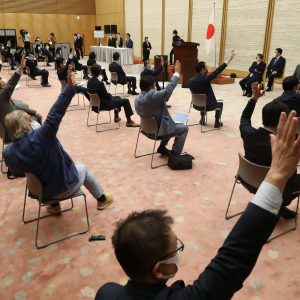 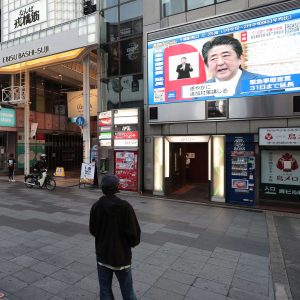 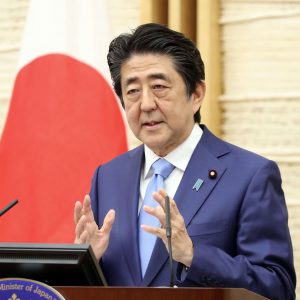 Prime Minister Shinzo Abe announced on Monday evening, May 4, that the state of emergency would be extended until the end of the month, citing the need to avoid further overcrowding hospitals.

The state of emergency was originally meant to last for just a month, but Japan had yet to put the epidemic under control. It was first announced on April 7 to cover Tokyo, Osaka, and 5 prefectures, and eventually extended to cover the entire country until May 6.

On Monday, the Prime Minister began his press briefing with the good news: the average number of newly diagnosed COVID-19 patients daily had gone down to 200, from about 700 in mid-April.

He thanked the Japanese who cooperated in the call to reduce social interaction. “The behavior of everyone is changing the future,” he said.

Yet there remains a need to prolong the state of emergency, according to Abe. There are more than 10,000 COVID-19 patients in hospitals, and the number of people in need of ventilators has increased by three times.

Since most people admitted into hospitals stay there for about two or three weeks, those who are well need to stay home some more to reduce the risk of getting more people infected and consequently overcrowding hospitals further.

“In order to improve the situation in the hospitals, it’s necessary to extend the state of emergency by about a month,” the Prime Minister said.

State of Emergency May End Earlier in Some Prefectures

Prime Minister Abe, however, raised the possibility that the state of emergency would become less stringent or perhaps end in some areas by the end of the month, depending on the advice of the panel of experts come May 14.

The state of emergency applies to the whole country, but in the future, he suggested, treatment could be differentiated according to the specific circumstances of each prefecture.

At the moment, 13 prefectures will continue to observe stricter measures. They are Hokkaido in the north; Tokyo, Kanagawa, Saitama, Ibaraki, and Chiba in Kanto; Ishikawa in the Chubu region; Gifu, Aichi, Kyoto, Osaka, and Hyogo in Kansai; and, finally, Fukuoka in Kyushu.

The prescription to decrease social interaction by 80%, with several additional limitations to business and public facilities, will not change.

Meanwhile, operations and restrictions in other prefectures will be largely left to the respective local governments. Requests to avoid travel across prefectural borders and other situations which might lend to the creation of further clusters of infection, however, would continue even in these areas.

Expressing regret that the emergency measures will be extended, the Prime Minister asked for the understanding of the populace. “I would like to formally apologize to the Japanese for not ending the state of emergency…. I take full responsibility for this,” he said.

The Prime Minister also reaffirmed that efforts were underway to get the cash handouts to the Japanese people as soon as possible: “More than 800 local governments have started accepting applications online (for the cash handout of ¥100,000 JPY). I would like to deliver it as soon as possible. For future measures, I plan to monitor the situation and decide accordingly.”

Mr. Abe expressed sympathy particularly for businesses that will have to continue enduring this harsh period. “To businesses that are living an unprecedented time, I am aware of the harshness of your situation,” he said.

He also touched upon the fact that further discussion was being carried out on whether to provide financial help to struggling students, some of whom lost their part time jobs.

‘Living Together with the Virus’

Prime Minister Abe made it clear that everyone would have to continue working hard in May: “This is the month to eradicate the virus. This is the month when the measures for the next step will be put in place.”

A key point in the Prime Minister’s announcement was the encouragement for everyone to create habits that would allow Japan to return to a more normal way of life. “We need to create a new way of life in the time of coronavirus,” he stressed.

Earlier in the day, the government’s expert advisory panel presented a draft with a specific set of measures giving further instruction on how to prevent the spread of contagion. These included people maintaining a distance of two meters apart and washing both hands and face for at least 30 seconds every time upon returning home. He explained that going out of the house in itself wasn’t bad, as long as people maintained the norms for physical distancing. “We can create a new routine this month,” Abe emphasized.

Giving an example, he shared government plans to secure a safe reopening of the schools while encouraging online learning in the interim: “We are taking various measures, such as securing a budget for one computer per person. But after giving due consideration to infection prevention, we are also presenting ideas for the gradual reopening of schools. These ideas include staggered school attendance, for example. We would like to do our utmost together with local governments and schools to secure learning opportunities for children.

The Push for Effective Treatment

Prime Minister Abe recapped the efforts taken by the government to fight the virus. These include supporting hospitals with the provision of gowns and other protective equipment, as well as securing medical supplies.

The government is in the process of completing the paperwork to start trials of Remdesivir, an antiviral drug used against Ebola which is thought to hold promise as a possibly effective treatment against the coronavirus.

Finally, the Prime Minister explained that steps were being taken to speed up the use and availability of Avigan, the drug formulated for the treatment of novel influenza. He aims to see the drug actively used against COVID-19 within May.

He also addressed the accusation that the number of PCR (Polymerase Chain Reaction) tests is still insufficient, in relation to the severity of the contagion in Japan.

“The analysis and recommendations of the expert panel pointed out that a significant reason for the continued deficiency in testing was the overwork of the health centers of each local government. With the cooperation of the medical association, the PCR test system now has been strengthened. We would like to thoroughly implement measures, focusing on major metropolitan areas such as Tokyo,” Abe said.

For the first time, the Prime Minister and members of the expert panel also mentioned the potential future use of antibody testing, which would be useful in gauging how far the contagion has spread throughout the population.

Prime Minister Abe explained: “It is difficult to understand the overall picture of infections only by PCR testing, and epidemiological investigation using antibody testing is also a meaningful method. Currently, we are evaluating the performance of antibody test kits, among other things. We would like to move immediately to the implementation of epidemiological surveys.”

Addressing the stigma that many have felt for having contracted the virus or working in places where there is the risk of contagion, Prime Minister Abe pointed out that such discrimination could be worse than the virus itself.

“It can do more harm to our society than the virus is doing. Everyone is at risk of infection, and I want you to feel supportive [of victims and those helping them]. There should never be any discrimination against health workers or families who are working hard with a strong sense of mission,” he said.

Finally, Prime Minister Abe recalled that, although there were still unresolved issues under discussion, Japan’s death rate was very low compared to other countries, such as the United States and those in Europe. He used this information to remind the country of the importance of every citizen’s cooperation to the best of their abilities, especially in a time like Golden Week, which is one of the longest holiday periods in Japan.

“If we keep the bond between people, then we can beat this scary invisible enemy, this virus,” concluded Abe.