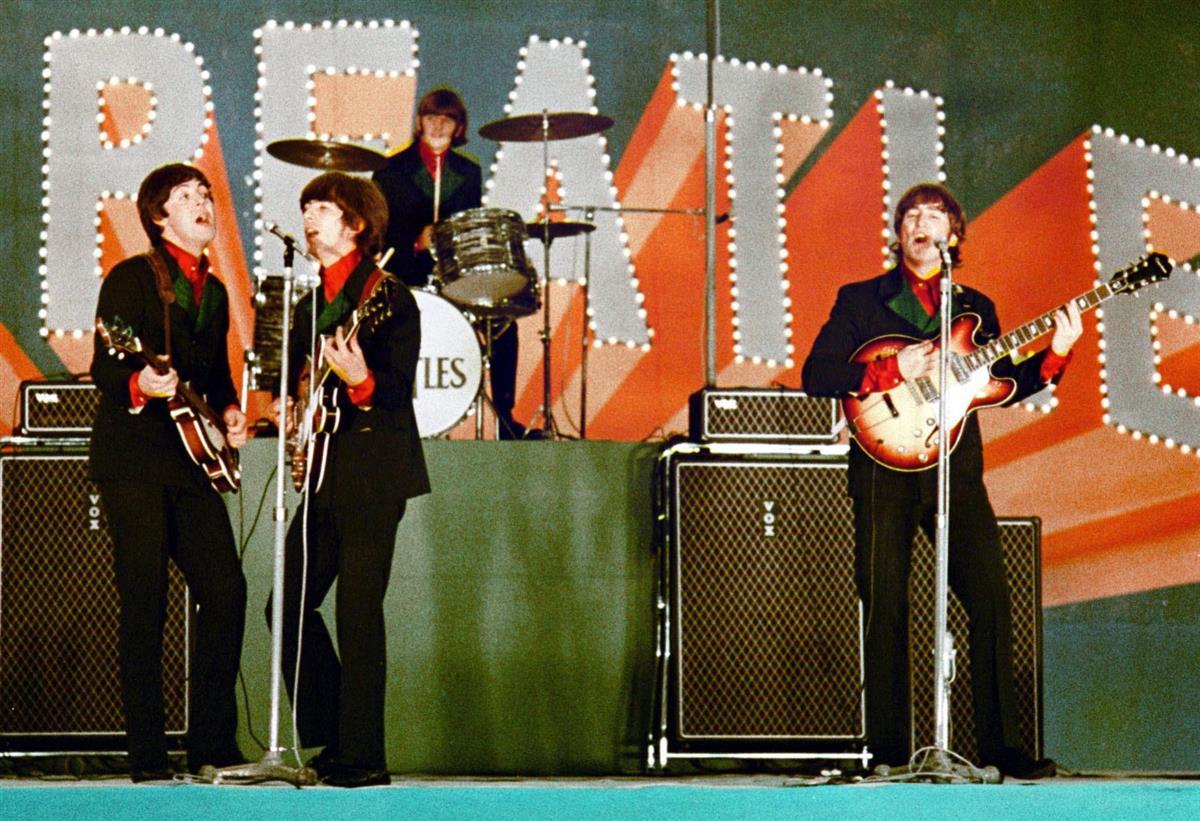 When the Beatles came to Tokyo in June 1966, the whole country was fascinated by them.

A few besotted fans waited all night for their plane to land at Haneda airport.

At dawn, the police whisked the band off in a convoy to the Tokyo Hilton Hotel in Nagatacho, where they occupied the presidential suite for three nights.

In the evening, they were driven under armed guard to the Budokan, an indoor arena (capacity about 14,500), for the first of several historic concerts.

Some religious extremists resented the Beatles using the sacred martial arts arena for western pop music. There were even death threats and warnings of snipers with guns hidden in the audience.

However, most people were thrilled to see them, and many women wanted to show them their love.

“They had been gathered up and herded into places where they were allowed to wave, so we’d go along the street and there’d be a little ‘Eeeeek!’ and then we’d go a few more hundred yards and there’d be another ‘Eeeeek!’” McCartney recalled later.

Security at the hotel was tight, preventing the Beatles from having any direct contact with local girls.

But in Japan the party never got started as the Beatles were under constant watch.

Paul McCartney claimed that “the subservience of the Japanese women was amazing”  although his conclusion appears to have been based on the way they bowed to him and other VIPs, rather than any deep curiosity about the society.

For another Beatle, though, Tokyo expanded his horizons.

Six months after the shows at the Budokan, John Lennon met Yoko Ono at an art gallery in London.

Yoko was from an aristocratic background and had no interest in pop music, so she claims that she did not know who John Lennon was at the time.

Their love affair and marriage went on to flourish as one of the most celebrated international relationships, linking Britain and Japan.

By the early 1980s, Japan had become a rich country and thus a lucrative market for foreign pop stars.

Boy George and Culture Club were number one in the Japanese charts when they made their first trip to Japan in 1983.

After doing the obligatory press interviews and TV shows, they decided to go shopping.

“Sometimes up to four hundred girls would follow us through the arcades and department stores, asking for photos. For a laugh, we ran at top speed though Nagoya, followed by hordes of squealing school girls, who were shouting our names. It caused our security guards to panic!” recalls the singer.

Boy George, who is gay, was famous for his feminine make-up and liked to wear exotic clothes, including kimonos.

The Japanese media called him “the rock n roll Tamasaburo” after a male actor who played the role of women in Kabuki plays.

Ambassadors of Love and Harmony’: What Praemium Imperiale Laureates Have to Say About Their Prestigious Award

Meet the Winners of the 2019 Praemium Imperiale Awards

Despite all the excitement, Boy George did not relish the experience of being mobbed by fans.

“I was uncomfortable,” he recalls. “They weren’t listening to the music, they were staring at me, scrutinizing every detail, looking up my nose.”

At one point, he lost control and shouted at the fans to calm down. Although he signed their autographs, he believes the girls would probably have been happier if he’d made himself less available and more mysterious.

Their name was initially a random choice, selected when they were schoolboys.

“I knew nothing about the East at the time,” said lead singer, David Sylvian.

However, being called Japan turned out to be fortunate, as it aroused interest in the group in Japan, at a time when they were struggling to make an impact at home.

People compared David Sylvian’s look to a character called Oscar in a graphic novel called La Rose De Versailles. Oscar was actually a girl, posing a man – but none of the band’s members were transvestites or gay.

Their first show at the Budokan in 1979 was greeted by “a deafening waterfall of screams.”

Their thin, aesthetic look provoked a deep longing among young women, stoked up by TV shows and magazines.

Many fans booked themselves into the band’s hotel, hoping to be near their heroes.

Security was so tight that Mick Karn claims that he was “sick and tired of being treated like a caged animal.”

At night, he stepped out of his hotel room and onto the landing, where he found many girls lying in wait. Dozens were sleeping on the floor and on the staircase.

In an adjacent hotel room, there were 15 young women – all Japanese fans of Japan. On recognizing him, they called out his name.

“I looked around the room, eagerly expecting them to carry me away,” he said.

“I was waiting to hear the leader say ‘Please take your pick!’ and all the girls saying ‘Choose me, choose me.’ But instead, all I heard was the question ‘What are you doing here?’”

At that point he realized that the thrill for the fans was to see but not touch, so he reluctantly crept back to his room, leaving the girls to their dreams.

Like Boy George, Japan’s Mick Karn concluded that the true excitement for fans comes from wanting a forbidden fruit they know they cannot have.

Nevertheless, Mick Karn kept in touch with one of the women he met in Japan, Yuka Fujii, and later opened a cafe with her in London, selling cakes and green tea.

The band also went on to work with Japanese musicians, including Ryuchi Sakamoto and other members of the Yellow Magic Orchestra, and they released a single called Life In Tokyo, which was a major hit.

Singer David Sylvian would later reflect that: “Japan has many faces, some of which I could only glimpse, rather frustratingly from the windows of hotel rooms, cars and trains.”

He added: “The first visit was one sustained intake of breath. On another level, there was a sense of homecoming.”

Duncan Bartlett is a regular contributor to Japan Forward and runs the news portal, Japan Story. Sources for this story include: The Beatles Anthology (book and DVD) The Beatles Bible (website) Many Years From Now by Paul McCartney (book) Take It Like A Man by Boy George (book) Japan – A Foreign Place by Anthony Reynolds (book published by Burning Shed).