Has China Created a ‘Red Version’ of its Border with India in Ladakh? 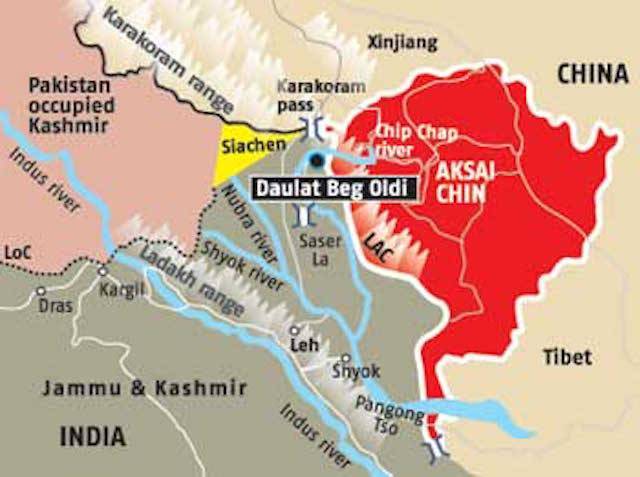 The intrusions took place in early May 2020, and the PLA is currently in a state of military face-off with the Indian army on these points. 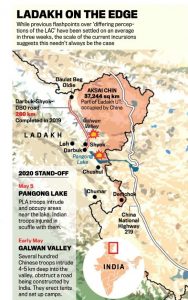 Pangong Tso in eastern Ladakh is a deep landlocked lake situated at 14,500 feet, en route India’s main approach road (via Chushul) in Ladakh. China has built motorable roads alongside the banks of the Pangong Tso. The northern bank has barren mountains with multiple forward spurs (lateral ridges descending from the mountains) that the Indian Army identifies as the “Fingers Area” F1-F8.

This area has now been occupied by the PLA up to Finger 4. Will a Chinese post be now seen shifting to Finger 4 on a permanent basis, following the latest post-May 2020 ingress?

Regular troops of the PLA have seized the initiative and reportedly taken physical control of the entire ground area of previously designated “no man’s land” lying between Finger 4 and Finger 8, and are now sitting on top of Finger 4, which is the northern edge of Pangong Tso. Therefore, when China aims for the LAC to be realigned in the direction of Demchok in the south, the total area of Pangong Tso coming under Chinese control becomes much larger.

Control of the heights in conflict zones lying in mountainous terrain is a position of military advantage. As per inputs from my sources, the area falling between Finger 8 and Finger 4, a distance of approximately 6.5 to 7.5 kilometers, stands captured by the PLA. The estimated ground area that has fallen under Chinese control here reportedly is around 30 to 40 square kilometers.

The Galwan River flows from the Aksai Chin region (under China’s illegal occupation) into Ladakh. It originates on the eastern side of the Karakoram Range and flows west to join the Shayok River. The Galwan River lies west of China’s 1956 claim line in Aksai Chin. In 1960, China advanced its claim line to the west of the river along the mountain ridge adjoining the Shayok River valley.

The PLA reportedly crossed the LAC 1.2 to 3.4 kilometers into the Galwan Valley and dispersed into three to four distinct locations, according to sources. The Galwan River flows from the disputed Aksai Chin region in southern Xinjiang into India’s Union Territory of Ladakh.

The Indo-Tibetan Border Police border checkpost is placed at Hot Springs in the Chang Chenmo River valley in Ladakh. India’s LAC with China lies only around three kilometers to the east, near Kongka La Pass.

The PLA is holding ground near Hot Springs with around 800 to 1,000 regular army personnel aimed at blocking Indian Army’s approach and movement towards Kongka La pass.

Ahead of the latest rounds of talks between the respective Indian and Chinese military commanders scheduled to be held at multiple locations, including the above three in eastern Ladakh, Indian news agency reports suggest that the Chinese army has pulled back its troops from the Galwan Valley (patrolling point 14), patrolling point 15, and Hot Springs, by 2 to 2.5 kilometers.

On June 13, the Indian Army chief, General MM Naravane, was quoted as saying that India-China disengagement had begun north of the Galwan River “in a phased manner.” However, no further details were added.

For starters, the admittance in these reports that Chinese forces have “pulled back” is a tacit admission that the PLA had crossed over the Indian side’s perceived LAC. However, as of the time of publication on June 15, there was no official confirmation, or clarification, of the status on the ground in the area between Finger 8 and Finger 4 in the Pangong Tso sector.

On June 10, Chinese Foreign Ministry Spokesperson Hua Chunying was asked about Indian media reports that Chinese and Indian border troops were disengaging and moving back from three locations in the west section of the China-India boundary.

Hua replied: “Through diplomatic and military channels, China and India have recently had effective communication and reached agreement on properly handling the situation in the west section of the China-India boundary. At present, the two sides are taking actions in line with the agreement to ameliorate the border situation.”

The Chinese ministry’s official response does not match the reported “pull back/withdrawal” or “disengagement” news reports. From India, absence of an official statement has necessitated reliance on ground sources.

My June 2 JAPAN Forward article provides context for the latest Chinese offensive in terms of the geostrategic vitality of the Depsang Plains and Darbuk-Shayok-Daulat Beg Oldi road axis used by India to develop the airfield at Daulat Beg Oldi. This airfield is located just eight kilometers south of the Karakoram Pass.

Clinching the Karakoram’s south would allow China to reach the Siachen Glacier. If China succeeds in coming from behind Siachen Glacier, it could challenge the Indian Army’s base camp at the Glacier. In such a scenario, the Indian Army’s positioning in Siachen would become indefensible. More importantly, China’s unilateral redefinition of the LAC could put it in a better position to control the Depsang Plains too.

The recalibrated Chinese presence in eastern Ladakh would render China’s collusion with Pakistan an even greater challenge for India. Siachen Glacier, when combined with eastern Ladakh, would be the only place where the China and Pakistan nexus could be played to their advantage against India in strictly conventional warfare terms.

The aim would be to consolidate Pakistan’s illegal occupation of Gilgit-Baltistan and the China-Pakistan Economic Corridor (CPEC), of which the Karakoram Pass and Highway would be an integral part.

With the Indian Army only patrolling the Depsang Plains and Karakoram Pass, for the foreseeable future it is expected that Beijing’s territorial expansionism will keep it from letting go of control of the crucial landmass up to Finger 4. This would force India to stay up to Finger 2, which is China’s perceived LAC.

Further south in Demchok, too, China’s military has consolidated its position. The resulting Chinese realignment in eastern Ladakh could render China capable of effectively challenging the Indian Army’s movement on the Darbuk-Shayok-DBO road.

Challenges Ahead for Asia

This precisely is why China has taken military control of crucial heights and nearby ground, while vehemently demanding that India halt construction activity around the Daulat Beg Oldi as a precondition for negotiations.

In mountainous terrain, especially that which is contested, any threat to the lines of communications and axes of maintenance makes occupation of those positions untenable. The side that makes the first move to occupy a position is at an advantage because, to dislodge the sitting force, at least five to six times more resources are required.

Notwithstanding the present Chinese trespass, India’s military commanders need to study the terrain through a strategic prism, and then put it in context with Chinese statecraft and objectives stemming out of that.

The message from China to India is entirely strategic, put into operation tactically in a classic example of operational art. The lingering question is whether China’s effort at de facto realignment of the LAC in eastern Ladakh along the lines of Demchok, Finger 4, and the Galwan Valley has become a reality.

Beijing’s manipulation of geographic realities in South Asia to serve its longstanding strategic objectives of territorial revisionism across Asia, has begun to surface.