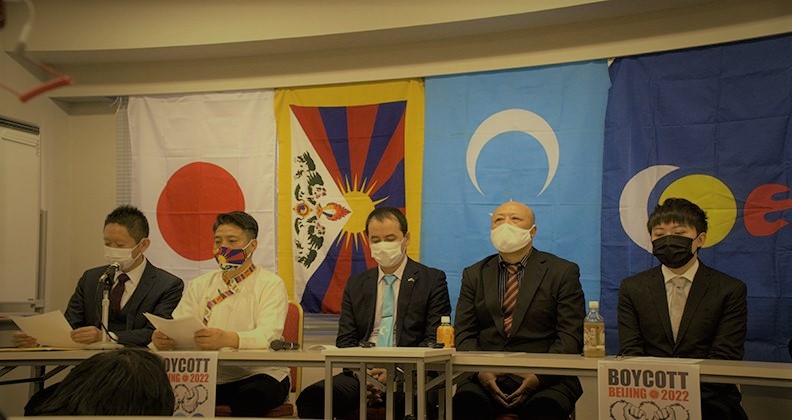 February 4, 2021. This day marks exactly one year until the start of the Beijing 2022 Winter Olympic and Paralympic Games.

Beijing was selected in 2015, without the world knowing they would be one of the first large sport events to happen after the onset of the spread of COVID-19 from China all around the world.

Yet, with increasing international attention gravitating toward China’s infringement of human rights track record, not everyone is taking the decision of 6 years ago lying down.

On February 4, more than 180 organizations released an open letter to governments openly calling for a boycott of the 2022 Winter Olympic and Paralympic Games in Beijing.

For several years, representatives of Chinese ethnic minorities and activists among them have called attention to China’s imprisonment of more than 1,000 Tibetans, the internment of 1.8 million people in East Turkistan in “re-education” (de facto concentration) camps, and recently in Southern Mongolia the Chinese government is preventing locals to study in schools in their mother language in favor of Chinese.

Most recently, many have also drawn attention to the crackdown on pro-democracy protests in Hong Kong as Beijing abandoned the promised 50 years’ “one country, two systems” framework and passed a new national security law for Hong Kong, effectively allowing the arbitrary arrest of anyone remotely opposing the regime in the formerly democratic special administrative region.

Finally, there is of course China’s intimidation of Taiwan, which recently includes the threat uttered by Chinese defense ministry spokesman Wu Qian that any Taiwanese attempt at independence “means war.”

Representatives of the 180 human rights organizations said in their joint statement: “Despite claims by the IOC and Beijing Olympic Committee that the Games will serve as a catalyst for progress, President Xi Jinping has unleashed an unrelenting crackdown on basic freedom and human rights.”

The human rights groups used the statement to further point out that, although the Chinese government pledged that the 2008 Summer Olympics would be a catalyst for improvement in human rights in China, this promise didn’t materialize.

The joint statement summed it up by saying, “We, a coalition of over 180 global campaign groups, jointly call on governments to commit to a diplomatic boycott of the 2022 Beijing Winter Olympic Games to ensure they are not used to embolden the Chinese government’s appalling rights abuses and crackdowns on dissent.”

Human Rights organizations in Japan were also taking part in the fight. On February 4, several of the organizations held a press conference to bring attention to the issue and called on the Japanese government to take action.

Bringing together heads of groups such as the Japan Uyghur Association, the Southern Mongolia Congress, Stand with HK@JPN, and the Tibetan Community in Japan, and the Free-Indo Pacific Alliance, individually and together they appealed loud and clear to Japanese lawmakers and public citizens to take the issue to heart.

Hidetoshi Ishii, vice president of the Free Indo-Pacific Alliance, urged Japan to stand up as a protector of democracy in Asia, conceded, “The reason why I do such activities is because I believe Japan should be the fortress of freedom in Asia.”

Reading a joint statement from the organizations in Japan, Mr. Ishii went on to express in harsh words that the international community should not legitimize the Chinese Communist regime by allowing them to host the Olympics:

“In the past, the Berlin Olympics held by the Nazi regime strengthened the legitimacy of the Nazis, who used [the Games] to hide its autocracy, oppression of human rights and racial discrimination policies… The world shouldn’t forget this historical lesson.”

Elaborating in a statement for JAPAN Forward, Ishii added:

“In 2008, China promised that they were going to improve the human rights situation. However, the human rights problems caused by China have worsened by far since then. In Uyghur, concentration camps were made, in Hong Kong, ‘One Country, Two Systems’ was practically collapsed, and in Southern Mongolia, even their right to get educated using their mother tongue was deprived. With the 2008 Summer Olympics, China boosted their power and gained confidence. Regarding COVID-19, also, China claims that their political regime is superior to democratic countries. We must not let China use the Olympics for enhancement of national prestige again because it would create more and more sacrifices.”

Pressing their appeal for free countries to take action, the human rights groups pointed to China’s behavior as a repudiation of the most basic human rights and an open contradiction to the Olympic spirit.

“The former U.S. Secretary of State [Mike] Pompeo said that what is happening in Turkistan is genocide. Secretary of State [Antony Blinken] of the [U.S.] Biden administration has also agreed.” Adding emphasis, he said, “Governments around the world, including Japan, should make it clear that genocide is not acceptable in the 21st Century, and we should work together to end this behavior.”

William Lee, a member of the Stand with HK@JPN and a Hong Kong pro-democracy activist summarized it this way:

“The 2022 Winter Olympics will be held in Beijing. We should not allow China, a country which treats people unfairly, to hold the Olympics which symbolize fairness. Human rights violations, like the virus, originated in China. They will spread all around if they are not stopped in the beginning. This time, they need to be stopped in Hong Kong.”

“I think that the Japanese government is afraid of criticizing China” reasoned Ishii.

He continued:” I think this is not something which Japan can do alone, I think the U.S. needs to take the lead, and the whole international community should follow.”