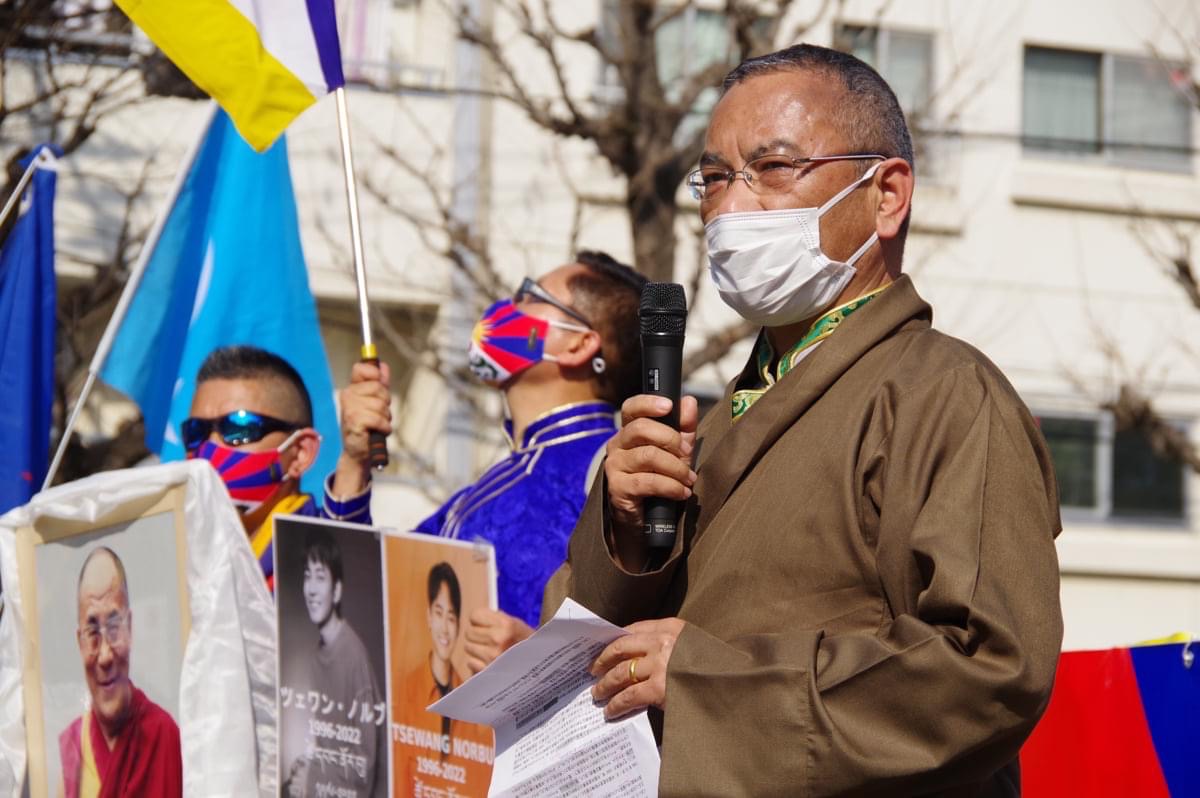 Dr. TG Arya speaking at a March 10, 2022 anniversary event in memory of the Tibetan uprising.

JAPAN Forward sat down with Dr. Tsewang Gyalpo Arya, the representative of the Liaison Office of His Holiness the Dalai Lama for Japan and East Asia, in late January. Dr. Arya had appeared in JAPAN Forward’s pages before, and is also affiliated with the Central Tibet Administration in Dharamshala, India.

Our interview ranged across many topics. Most pressing in the moment was the upcoming 2022 Beijing Olympics. Dr. Arya expressed his grave concern over the Chinese Communist Party being given the opportunity to host the Olympic Games amid China’s ongoing violations of human rights.

Now the world is faced with a new crisis: the invasion of Ukraine by Russian forces under Vladimir Putin. In this second, updated part of our interview, Dr. Arya comments on Tibet and the People’s Republic of China, and also on how the unfolding war in Eastern Europe affects East Asia.


Some news reports have recently indicated that the Ukrainian authorities may have to set up a government in exile and prepare for decades of occupation of their country by a hostile foreign power. I immediately thought of Tibet.

The reason for this Tibetan diaspora is the illegal invasion of Tibet by the People’s Republic of China (PRC). The ultimate goal of the Central Tibet Administration is to restore freedom and democracy in Tibet. Tibet has always been an independent nation, but in the 1980s His Holiness the Dalai Lama began to advocate what he calls a “Middle Way Policy,” the establishment of a truly autonomous Tibet, as indicated in the Constitution of the PRC.

I pray that the invasion of Ukraine will stop, and that the integrity of the country will be respected. The international community should come out openly and condemn this Russian aggression. But if Tibetans’ experience is any indication, then the Ukrainian people may be starting out on a long road of hoping for a restoration of rights and freedoms.


Are you aware of the recent news reports, “The Ukrainian Catholic Archdiocese of Kyiv-Halych and the Ukrainian Embassy to the Holy See said they had received information that Russia planned airstrikes on the Cathedral of St. Sophia in Kyiv?”

In Tibet, People’s Republic of China agents have destroyed a statue of the Maitreya Buddha, razed monasteries and convents, desecrated sacred prayer wheels, and committed horrific acts of violence against religious adherents and ordinary Tibetans.


Do you see any parallels between the cultural destruction in Ukraine and the ongoing war against Tibetan culture in Tibet?

What we are seeing these days is a resurgence of former Chinese leader Mao Zedong’s Cultural Revolution in Tibet, but news about it has not been coming out. This is of course due to the strict surveillance system blocking communication with the outside world and the PRC’s complete control on the media. But it is also due, I think, to a certain acceptance by the world community of China’s atrocities. China’s acts of destruction and desecration have become almost routine.

Last December, China destroyed a 99-foot Buddha statue and a 30-foot Buddha Maitreya statue. They destroyed 45 giant prayer wheels and a monastic school one after another with impunity. This February, they destroyed a big statue of Guru Rinpoche, revered by Tibetans as the second Buddha, in the Kham Drakgo region of Tibet.

Tsewang Norbu, a young well-known Tibetan singer, died of self-immolation in Lhasa. Go Sherab Gyatso, a monk intellectual who wrote many books on Tibetan religion, history, and culture, was arrested and put into jail. His health is said to be in danger.

I heard that Christian sites and Christians are being targeted in Ukraine. This is not good. In China, Christian bishops have been disappeared by the Beijing authorities, and the “patriotic” Catholic Church has been promoted at the expense of the “underground” Church, which does not accept Beijing’s takeover of religious life.

Religion is the heart of our culture, and it seems there is much the same situation in Ukraine. I pray that the churches and other holy sites are not targeted in an attempt to wipe out the Ukrainian identity.


Has the PRC been successful in its war against Tibet?

No, not at all. The Chinese Communist Party leadership hates Tibet because Tibet has never given in and will never give in. Even after more than 70 years of invasion, repression, and violence, China has not been able to fully conquer Tibet and the Tibetans. The CCP leadership realizes that nobody in Tibet respects and follows the CCP or believes what Beijing says.

The Tibetans respect and follow the Lamas, especially the reincarnated Lamas, the Buddhist priests. Knowing this, Beijing sets up false Lamas and uses them as mouthpieces for party propaganda. The CCP forces the Tibetan people to bow down and show respect to these imposters. The Panchen Lama’s case is a typical example of this sacrilegious policy, where people are forced to respect and bow before the China-appointed Panchen Lama and receive teachings from him. But, in their hearts, the people do not accept what Beijing says or does. Beijing is aware of this and it enrages them.

The native Bon religion and Buddhism from India is who we are as Tibetans. The CCP says we are “separatists,” but the fact is that so many Han Chinese have come to Tibet to study Buddhism in peace.

Historically, Tibetan Buddhism played an important role in keeping peace across so many Han Chinese and Mongolian and Manchurian dynasties, and Tibet continues to seek peace, just as we have always done. Today, there are more than 240 million Buddhists in China and they respect and support what His Holiness the Dalai Lama says and teaches.

The “Middle Way” policy of the Dalai Lama is proof that we are not separatists. It says we have no objection to living with the Chinese and other minority nationals. We are prepared to live in peace with our neighbors. But we want  genuine autonomy and freedom to practice our language, culture, and religion.

The PRC has not made the “Middle Way” documents public inside of China. This could be because Beijing knows that to do so would be to expose the lies the CCP has told about Tibet. The CCP leadership is creating misunderstanding between Chinese and Tibetan people. They are afraid that Buddhism and the Middle Way Approach will unite the two communities.

So, the real separatists are the CCP leadership, not the Tibetans.


In 2020 the United States government passed the Free Tibet Act, which showed strong support for Tibet and her people. Now the US has acted quickly to sanction Russia for aggression in Ukraine. Why was Washington so prompt in responding to the invasion of Ukraine, but so slow to speak out about Tibet?

In the early 1970s, then-President Richard M. Nixon was trying to woo Mao and communist China. American policy after that was to engage with China, hoping that in time China would change and live by international norms.

But the past experiences and events have revealed that this China appeasement policy has backfired. It has only emboldened China to attack civil society and democratic values.

America has realized the importance of the Tibetan struggle for peace and justice. Our struggle is seen as an inspiration for all those fighting against brutal dictatorial regimes. That’s why the United States adopted this 2020 Tibetan Policy and Support Act, in which it has promised both political and financial support to keep our struggle and hope alive.

Learning from past mistakes, the US government is quick in responding to this Ukraine invasion by Russia. The government doesn’t want another Tibet in the heart of Europe. This would put world peace in jeopardy.

The invasion of Tibet by China has made the whole Southeast Asian region volatile and precarious. The Russian invasion of Ukraine will usher in Russian hegemony and put whole European countries under threat. Democratic values and international norms will become things of the past.

On February 4, 2022, shortly before Russia invaded Ukraine, reports said Moscow and Beijing entered into an agreement to support their territorial designs on their smaller neighbors, Ukraine and Taiwan. How should the international community react to this aggression?

All the problems of wars and refugees come mainly from the arrogance and obstinacy of dictatorial regimes. They don’t care about people’s lives, all they care is how securely they can hold onto power. Vladimir Putin and Xi Jinping are dangers to humanity and world peace. Putin has put the Russian and Ukrainian peoples’ lives at risk for his personal glory.

Yes, I can see a direct link between Russia’s invasion of Ukraine and Chinese plans to do a similar maneuver against Taiwan. The silence of the international community and insipid response to what is happening in Ukraine will definitely embolden Xi Jinping to invade Taiwan. This will make the Indo-Pacific region a highly militarized dangerous zone.

When China invaded Tibet in the 1950s, the neighboring countries and the world kept quiet, thinking that they would be spared. Today, the borders along Nepal, India, Bhutan, and Tibet have become highly volatile and dangerous.

So, we need to take this Russian invasion of Ukraine seriously and condemn Putin for this war to satisfy his whim and arrogance. We must note that even Russian people are against this war.

Does the Central Tibetan Administration have any special messages for the people of Ukraine?

Tibetans around the world have joined the demonstrations to condemn this unjust brutal act of aggression by Russia. As people who have experienced invasion and lost their freedom, we fully understand the Ukraine people’s feelings. We are with the people of Ukraine.

The international community should condemn the invasion in the strongest possible manner and initiate efforts to stop Russia from inflicting further suffering and anguish on the Ukrainian people.

The statement further said: “For the Tibetan people, this invasion is reminiscent of China’s brutal military occupation of Tibet in the 1950s. It is even more shocking and painful to see such invasions taking place in this age of democracy and peaceful coexistence. Therefore, the Tibetan people stand in solidarity with Ukraine and offer their prayers for a swift end to the suffering.”

We request Putin to stop this war and heinous crime against humanity at the earliest. It is an assault on civil society and democracy.