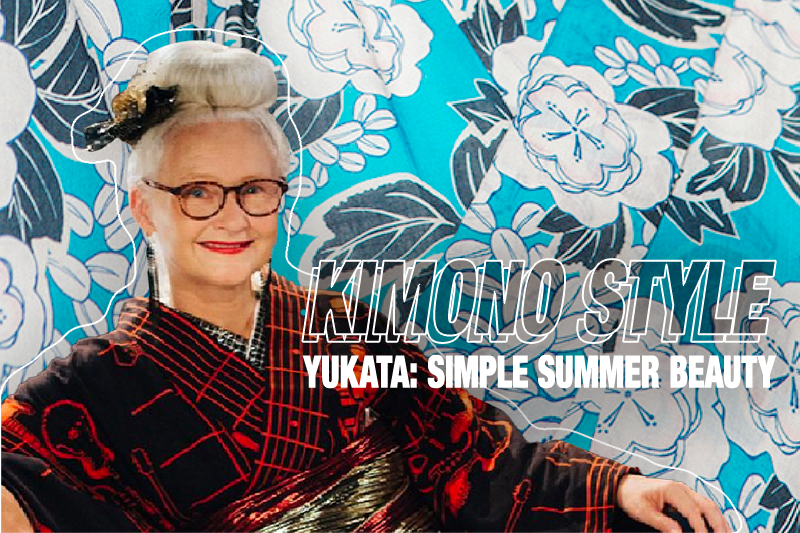 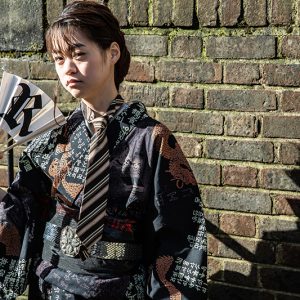 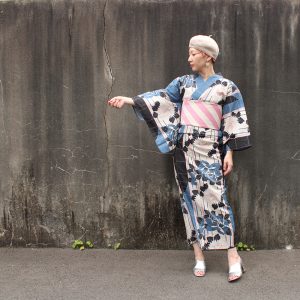 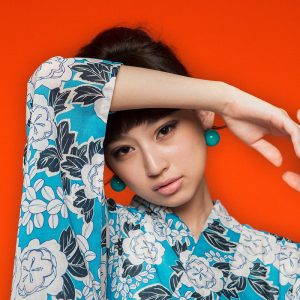 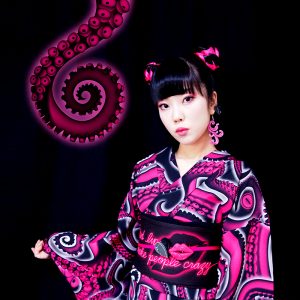 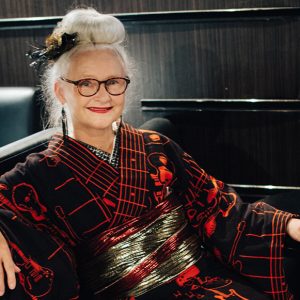 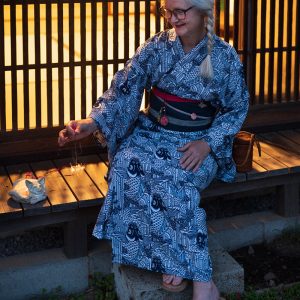 We are almost at the beginning of the yukata season. One of the joys of the Japanese summer for me is seeing all the people wearing their yukata when enjoying shopping, a night out, or summer fireworks and festivals.

It is the simplest and most humble of kimono, a single layer of dyed cotton. But right there in its name is a hint of its interesting history.

If one goes back in time, before the Edo period which started in 1604, Japanese bathing customs were rather different from today. The types of cloth commonly available to people were also different. While the rich could wear silk, the poor wore various types of rough hemp and plant fibers.

Wealthier classes would wear unlined robes of very fine linen in the summer, with embroidered patterns. These were called katabira. They wore plain ones to the bath, which was actually not a bath, but a sauna. These were called yukatabira. (The yu means hot water).

At the beginning of the Edo period, the city of Edo (Tokyo) began to emerge, growing into a huge urban center in the following 200 years. Of course, many townspeople lived in tiny houses of one or two rooms packed densely together. Fire was an ever-present danger, and people did not have the luxury of bathing at home.

The bathhouse, sento (literally, pay a sen for hot water), culture began to spring up.

At around the same time, the beginning of the Edo period, European traders were arriving on the shores of Kyushu and were bringing beautiful batik and chintz from Europe and also from India and Indonesia, which they had traded on their long journeys across the world.

These fabulously-patterned imported cottons became highly fashionable, but were prohibitively expensive. It is hard to imagine that cotton could be more expensive than silk, but only the wealthiest could have afforded a cotton kimono with expensive imported fabric. And usually they were patchworked, used for nagajuban underwear, or turned into small items that were more affordable, such as tea caddie bags, pipe cases, and purses.

However, this all changed when the domestic cotton industry started in the Kinki region of Japan. By 1624, Japan was growing its own cotton, drastically reducing the price of the product. Moreover, it was found that cotton was very easily dyed with the native indigo, which grew all over Japan. This was the start of Japan’s love affair with the blue and white cotton fabrics that are so typical in its textile culture.

In Kyushu, and in many areas along the Japan Sea side, complex kasuri was woven. This was used in the making of farming wear and for domestic country textiles. But indigo- and white-dyed yukata became the height of fashion by the end of the Edo period.

While the poor were probably limited to wearing plain browns that were easy to dye, those who could afford it would want an indigo- and white-dyed yukata. Everyone wanted to show off their beautifully-dyed garments on the way to the bathhouse.

These lovely clothes are seen in the ukiyo-e of the period.

The two most popular dyeing techniques were shibori and katazome. There are many different types of shibori, and the town of Arimatsu — near Nagoya, a trading post town on the Tokaido road between Edo and Kyoto —  became famous for its shibori dyeing. It was not too far from the cotton-growing regions and in a significant location for trade.

The most famous kind of shibori is kaneko shibori, the overall dyeing of small dots on a fabric, but many other kinds of shibori produce many different patterns. Nui shibori is when sewing stitches are used to resist the cloth, itajime uses boards pressed together after folding the cloth. Other types use poles, threads, or other items to make resist patterns on the cloth. Shibori is still a popular, but an expensive, technique for the production of yukata.

Some of the most fantastic cotton fabrics produced in Japan are the stencil-dyed cottons of the Edo period. The technique was called nagaita chuugata. Literally, this means long board and middle-sized design. Intricate patterns were cut in stencil paper, created by several layers of washi that was smoked in fermented persimmon juice.

For the most complex designs, two stencils, nimaigata, were used. The cloth was laid onto a board several meters long, and, using the stencil, the resist paste was laid onto the fabric, matching each stencil to the next one perfectly. After one side was pasted, the dried cloth was turned over, and it was pasted in reverse on the other side. This is unique to the nagaita chuugata technique. Other stenciling techniques are only performed on one side, meaning that the dye gets onto the back of the fabric.

This double stenciling accounts for the stunning contrast of blue and white in these yukata. The exacting nature of this technique meant it has always been expensive to produce, and an extremely demanding craft. So much so that two of its artisans have been designated as living national treasures, Matsubara Sadakichi and Shimizu Kotaro.

Komiya Yasutaka and Yasumasa, also national treasures and dyers of Edo komon, found stencils from the Edo period. After much research, restoration and re-cutting, they were able to produce new yukata bolts using the same designs that were used in the Edo period. Their lovely work revived the freshness of the intricate Edo patterns.

By the end of the period, many dyers of nagaita chuugata had turned to dyeing the increasingly popular and slightly less labor-intensive Edo komon.

Over time, less expensive techniques were needed to dye yukata, and kago zome was introduced. This literally means basket-dyeing. The stencil patterns were cut into metal plates which were welded together at the edges into a tube-like shape. Dyes were pushed through the metal stencils onto the fabric. The metal tubes (baskets) were more hard-wearing than paper stencils, and the process was semi-automated. Kago zome hardly exists now, though some workshops have realized that the tubes make rather attractive side lights, and they have been producing them for lighting rather than for the original purpose of dyeing fabric.

Kago zome was replaced by chuusen zome. One-meter long stencils were cut and the 12 meters of yukata fabric were folded up after the resist paste was put on. The dyes were dripped through the cloth, with a tool like a watering can. This allowed it to seep freely into different shapes and colored patches. Most often, dark indigo blue or white were the base colors, and other colors were dripped onto the cloth in patches. These yukata are the ones that people think of as traditional today.

Chuusen zome is still used today. However, it is more expensive than digitally-printed garments. Of course, digitally-printed garments can be easily reproduced, but every chuusen zome yukata is a little different because of the way the colors are blended. Digital printing has, however, made the production of a wide variety of new styles in gorgeously bright colors possible.

Never has there been so much choice in the world of yukata. Cotton, linen, polyester, a blend, the traditional blue and white, or day-glo colors. Patterns go from flowers to fish, from punk to peonies, and every kind of design imaginable. There is really something for everyone.

Yukata are cool and easy to wear. You can wear a han haba (half width) or heko obi (basically a long piece of cloth tied in a bow), or even a wide belt. A paper fan (uchiwa) and some wooden geta or sandals will complete the outfit.

If you can social distance and go out in the evening this summer, I recommend going in style for those special occasions. Look lovely in your chosen yukata!

So what is new this year? 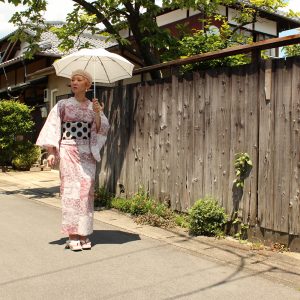 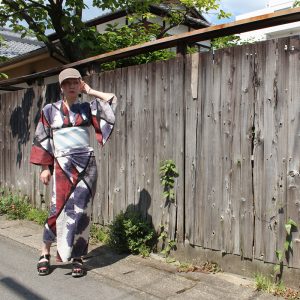 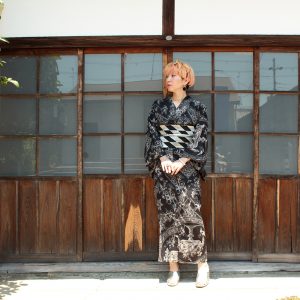 Modern Antenna has gone for earthy colors and stencil-dyeing this year. Lace, roses, and abstract geometrics give a modern urban take with beret and sandals. 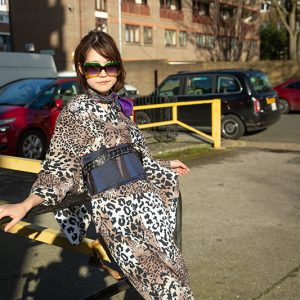 Shibazaki Rumi of Rumix Design Studio has been keeping to her edgy urban look with these chuuzen zome designs. One is of “Texts That Changed the World.” Close examination is needed to determine all the texts, a real talking point. The other one is a big cat print, which continues to be fashionable with young people. 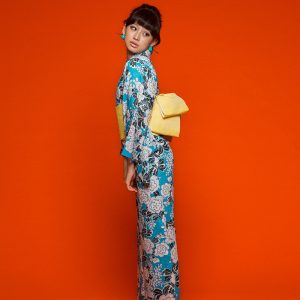 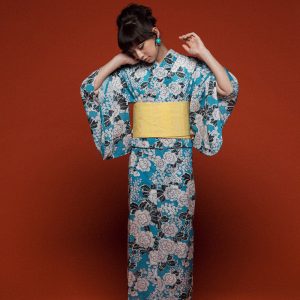 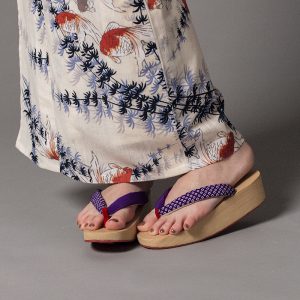 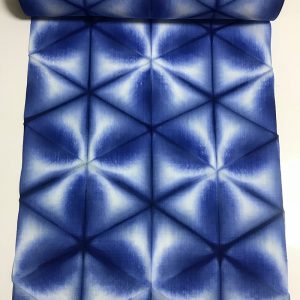 Kigoshi-Suezawa Mari of Kahana shows this “Cherry Blossoms in Summer.” It is an ink-jet print. “Goldfish” is a cool nassen zome yukata, and the blue triangles are done with itajime shibori on a state-of-the art fine polyester. You can find them at this link. 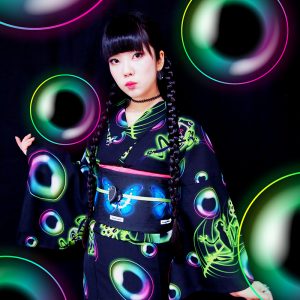 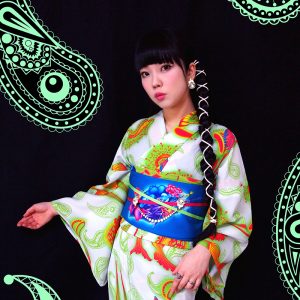 Iroca is using ceo alpha, a very silk-like polyester, and its signature day-glo colors. In “Glass,” there are glass frogs, glasswing butterflies, and soap bubbles floating around the dark ground. “Sweet Trap” shows a variety of carnivorous plants, and “Tentacles” shows the large tentacles of a giant octopus. For those inspired by Iroca’s world of strange creatures, they are available online at the above link.

And, finally, two of my own favorites: the Edo-style nagaita chuugata from the Komiya workshop I have loved over the years (It is a treasure for me); and the Rumix Design Studio guitar yukata I enjoy wearing for musical events in the summer.

OTHER ARTICLES BY THE AUTHOR: