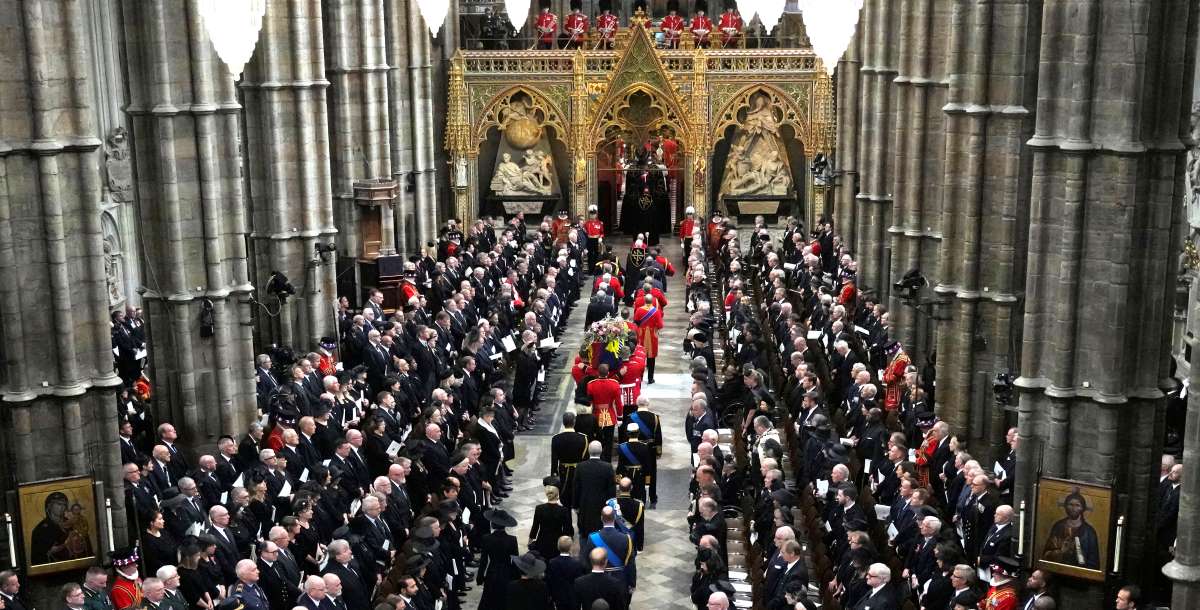 A poignant two minute silence was held at the end of the funeral of Queen Elizabeth II.

Watching the funeral from the Queen Elizabeth Hall, a building in Westminster which had been opened by the Queen in 1951, I stood in silence as the Queen’s coffin was taken from the abbey on its final journey. She has been laid to rest in St George’s chapel in Windsor, alongside her husband, the Duke of Edinburgh.

I noticed from the video feed that the two minute silence was also being kept by people in Belfast, Christchurch, Wolverhampton and – I assume – millions of locations around the world.

The estimated global television audience for the funeral was four billion, although it is almost impossible to measure how many people were watching, or indeed to assess the impact the event had upon them.

NHK ran a special program, in which the events of the day were explained to a Japanese audience.

Special attention was given to Emperor Naruhito and Empress Masako of Japan, who came to London on their first international trip since they ascended the throne three years ago.

According to purity laws laid down by Japan’s Shinto religion many centuries ago, emperors should not attend funerals apart from those of their own parents.

However, in the modern era, exceptions have been made. The current emperor’s father, Emperor Emeritus Akihito and his wife Empress Michiko, traveled to Belgium for the funeral of King Baudouin in 1993. Historians have also noted that until the 20th century, British monarchs did not attend the funerals of their predecessor.

Queen Elizabeth II has been widely praised for her work in restoring friendly relations between the UK and Japan following the Second World War.

The queen visited Japan in 1975 and Emperor Akihito made his first visit as a monarch to Britain in 1998. He also attended the queen’s Diamond Jubilee celebrations in 2012 to commemorate her 60th year on the throne.

Following the queen’s death, Emperor Naruhito issued a statement in which he recalled friendly meetings with the British monarchy while he was studying at Oxford University – including a picnic.

“From my heart, I declare my gratitude and esteem for her many achievements and contributions,” he wrote. During the service at Westminster Abbey, the emperor sat near Malaysia’s King Sultan Abdullah Sultan Ahmad Shah and behind the king and queen of Jordan.

The imperial couple stayed at Claridge’s Hotel in London’s Mayfair. The night before the funeral, Emperor Naruhito went to Buckingham Palace for a reception hosted by Britain’s new king, Charles III.

This event offered an opportunity for him to greet Britain’s Prime Minister Liz Truss, as well as the American president, Joe Biden, the French president, Emmanuel Macron and the European Council president, Charles Michel.

President Yoon said Queen Elizabeth “had a strong belief in the cause of human freedom and left great legacies of dignity”. South Korea transitioned from military rule to multi-party democracy during the Queen’s lifetime.

On the day of the funeral, the South Korean Foreign Minister Park Jin held a “friendly” discussion with his Japanese counterpart Yoshimasa Hayashi in New York.

“We had a good talk. We agreed to make sincere efforts from each side to improve the Korea-Japan relations,” Park told reporters after the meeting. They had discussed a bilateral summit to be held soon between President Yoon and the Japanese Prime Minister, Fumio Kishida.

The Chinese leader, Xi Jinping chose not to attend the royal funeral, even though the previous week he had left China on an official trip to Central Asia, where he met President Vladimir Putin of Russia.

China was instead represented by the vice president, Wang Qishan. He sat in a different part of the church to the Japanese emperor. He was dressed in a black Mao suit and wore a face mask throughout the service, which bore the emblem of the Chinese flag.

Wang Qishan viewed the queen’s coffin in Westminster Hall on Sunday evening, even though some conservative British politicians said he should have been excluded from commemorative events, because of China’s record on human rights and its treatment of its critics.

Vladimir Putin was not invited to the Queen’s funeral. Myanmar, Belarus and Syria were also regarded as unwelcome.

The guest list for the funeral was organized by the queen’s representative, Earl Marshal, the Duke of Norfolk. Having consulted with experts on Asia, he chose not to invite Taiwan, in order to prevent a diplomatic clash with China, which regards the island as a breakaway province.

Taiwan is not officially recognized as a country by Great Britain ー and it does not have a London embassy. Nevertheless, the royal household asked Taiwan’s representative to the UK, Kelly Hsieh Wu-chiao, to sign a book of condolence.

The Taiwanese President Tsai Ing-wen issued a statement saying: “Taiwan and the United Kingdom are united in their gratitude for the queen’s lifelong contribution to world peace and prosperity. Taiwan will also work with the United Kingdom to continue to work hard for common ideals and values.”

As I watched the Royal funeral, I didn’t see any pop stars or celebrities. Later, though, some social media users noticed that the actress Sandra Oh was among the congregation, as part of the Canadian delegation.

In his sermon, the Archbishop of Canterbury used some challenging words which would have been particularly relevant to the many politicians who were seated in the pews.

I am certain that Her Majesty the Queen will leave a lasting and cherished memory in the minds of many people in Britain, Japan and throughout the world.