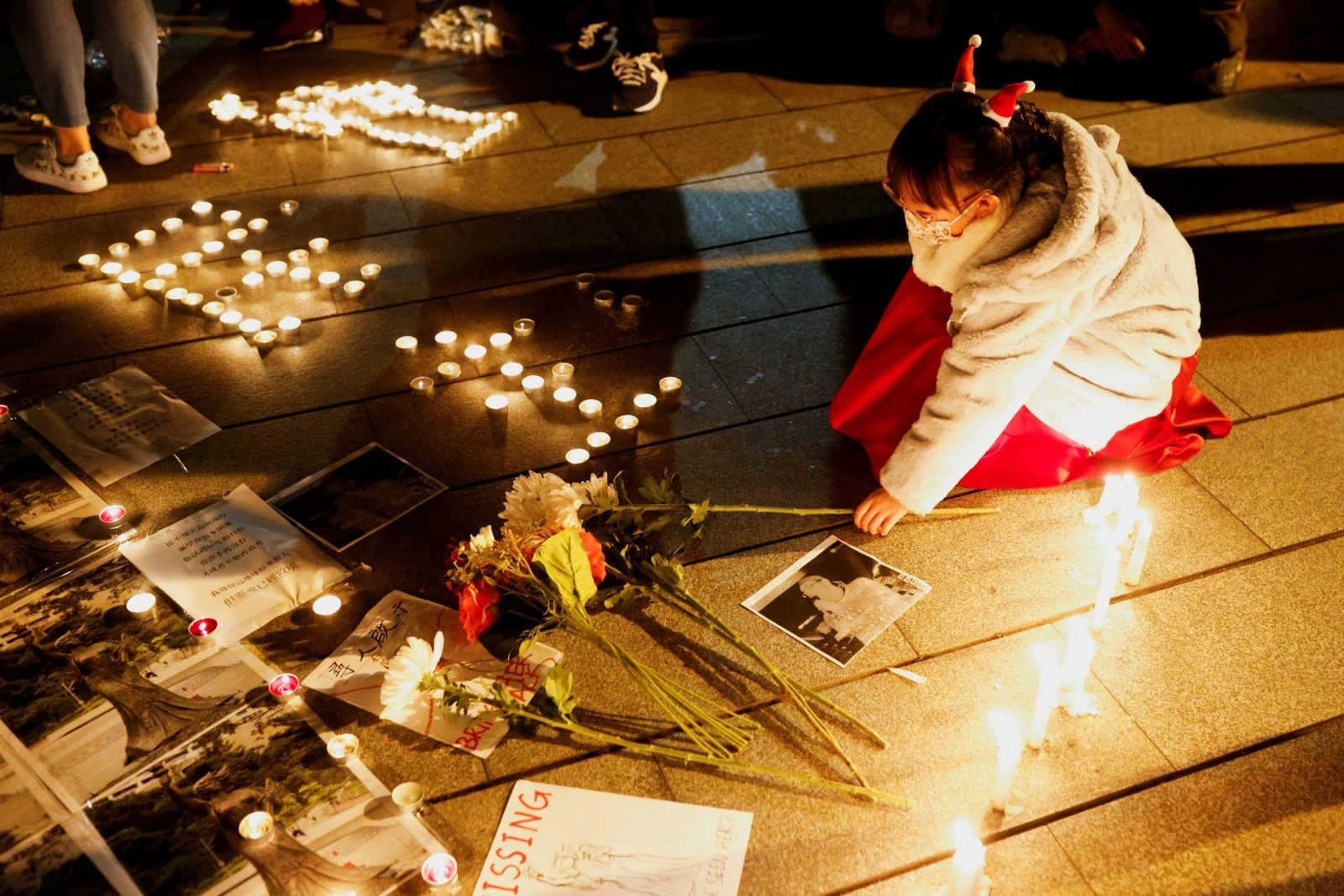 December 24, 2021. A girl places a flower bouquet to pay tribute to the victims of the June 4, 1989 Tiananmen Square crackdown in Beijing, at the place where the Goddess of Democracy statue used to stand, at The Chinese University of Hong Kong. The statue was removed by school authority in Hong Kong, China. REUTERS/Tyrone Siu

Part 3: Remaking Hong Kong: The Order from Beijing is to Brainwash Students

Xi appeared grimmer than usual as he received Lam’s regular report on the past year.

However, in news footage of the meeting, Xi was seen grinning for one short moment: a smile flashed at Lam as he praised her for “restoring [Hong Kong’s] social stability.”

The anti-government, anti-Beijing protests have subsided since the Hong Kong National Security Law came into effect on June 30, 2020. Out of more than 10,000 arrests, more than a quarter have been prosecuted.

RELATED: Beijing Pulls Off A Bloodless Coup in Hong Kong

In November 2019, amid the ongoing protests, a 32-year-old man who was then a secondary school teacher (equivalent to middle and high school) went to the Hong Kong Polytechnic University after receiving a call that his student was detained by the police.

The student had participated in a protest at the university, which ended in a violent clash between the students and police. Once the police questioned him about his name, address, and ID number, the student was released.

That student is now 19 years old and attends a private university. According to the teacher, his former student “lives in fear, wondering when his turn will come” whenever another participant in the 2019 protests is charged with rioting or other crimes.

Like this student, countless people who participated in the protests have had their ID numbers and other personal information recorded by the police. That measure alone gives the police considerable silencing power.

“I had no choice but to become like a robot inside those walls. If they didn’t like the way I folded my bedding, I had to keep refolding it all day long as punishment.”

Wong Ka-chun (not real name), who is 25 years old, was sentenced to six months imprisonment for assault and released from prison in 2021. He had injured a pro-Beijing Hong Kong citizen but has no regrets.

“For a while during my imprisonment, I was determined to keep protesting even after my release. But, on that day, I became painfully aware of our defeat,” he said.

By “that day,” Wong was referring to June 24, 2021, when the major media pro-democracy newspaper Apple Daily published its last edition. The paper had been forced to cease all publications.

The demise of the newspaper, which Wong had avidly read since childhood, came as a huge shock.

Before he was imprisoned, Wong worked in financial consulting — an industry dominated by people of the pro-government, pro-Beijing camp. Since it was widely known that he had been sentenced to prison and served time, Wong found it impossible to find a new job. He is still unemployed today.

Universities in Hong Kong have also undergone drastic changes. The campus of the Chinese University of Hong Kong, which was once central to the pro-democracy movement, is now lined with surveillance cameras. The Goddess of Democracy statue was removed from the campus on December 24, 2021, as the university authorities further tightened their control.

Piles of flyers calling for democracy that had been stacked in front of the student cafeteria have been replaced by booklets from organizations that provide care for depression and other mental illnesses.

“I heard that job hunting in 2020 [after the protests] was very difficult,” said a 21-year-old male student of the Chinese University of Hong Kong.

“Will it be very difficult for current fourth-year students then?” I asked, encouraging him to share his story.

“Not really,” he said, laughing. “Surprisingly, the job-hunting situation improved in 2021. I don’t know why, but students have been saying that it’s because of the shortage of workers caused by the rapid increase in the number of people moving overseas.”

A Japanese person working for a company in Hong Kong also said: “There are some Hong Kong people who are happy about getting promotions and raises because their bosses moved overseas and vacated their post. Not everyone is so pessimistic about the future.”

Another young man was released from prison in 2021, after being arrested in the fall of 2019 and sentenced to two years imprisonment for helping to build a bomb.

Let’s call him Ma Ho-yin (not real name). At 19 years old, he is a student again, now back in the fifth year of secondary school (or second year of high school). Ma said that during his imprisonment, his mind was constantly full of thoughts, from when he woke up at 6:30 a.m. until lights out at 10 p.m.

He, too, has no regrets about what he did. But he is refraining from participating in political activities because he believes it’s not the right time for action.

Before his arrest, Ma never thought about his future beyond graduation, but now he hopes to start his own company.

“What I need to do is make money, study, and work out. In other words, I need to focus on my personal growth.”

Currently, Ma invests in crypto assets (virtual currency). He said he has nothing in common to talk about with his classmates.