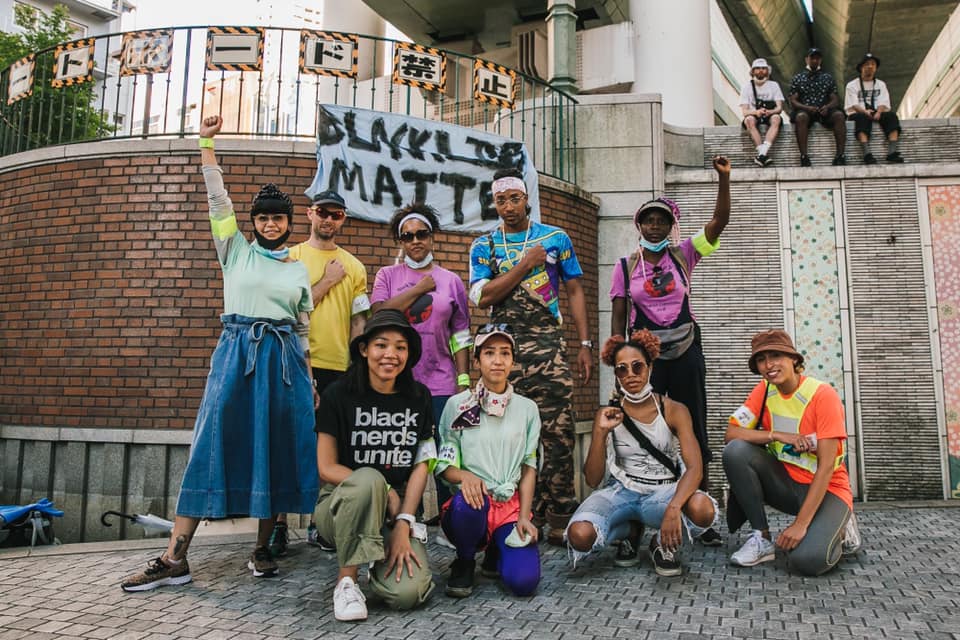 On June 14, there was a BLM (Black Lives Matter) protest march held in the Shibuya area of Tokyo, Japan. This was not the first protest march to be held in Japan, but it was the first for BLM in Tokyo. Earlier, a BLM protest was held in Osaka, and protests had been held for two Kurds who claimed mistreatment in separate unrelated incidents.

According to Ms. Sierra Todd, an Afro-American student at the Tokyo campus of Temple University who leads BLM Japan, the protest march was to demonstrate solidarity with BLM in America and to introduce a conversation about racism in Japan.

Many were there to protest the Japanese people’s supposed bias against foreigners. The march, with some 3,500 participants — including Kurd supporters, antifa members, and many foreigners — was conducted without incident. It was led and protected by the Tokyo police.

Ms. Todd is probably aware of the fact that, although the Japanese are very race conscious, they are polite and fair in the treatment of Blacks, or any foreigners. What she and her supporters are probably unaware of is Japan’s historic role in seeking racial equality.

A hundred years ago, Japan was the first nation to advocate racial equality for colored people in the international scene.

At the 1919 Paris Peace Conference, which produced the Treaty of Versailles that brought World War I to an end, Japan submitted a proposal to include a clause in the covenant of the League of Nations that would abolish racial discrimination.

Japan had attended as one of the five great powers and demanded racial equality for all members. Incorporating the “proposal to abolish racial discrimination” into the clause of the League of Nations was supported by most of the members, including France and Italy.

The proposal was defeated largely due to the opposition of the United States and Great Britain. Opposition to the racial equality clause was especially strong in the southern states. Ironically, U.S. President Woodrow Wilson — who received the Nobel Peace Prize as the leading architect of the League of Nations — was unable to get congressional approval for the U.S. to become a member.

Although President Wilson sought to appease the Japanese by granting concessions, this rejection of the proposal for racial equality was an insult and not forgotten by Japan. The Naval Treaty of 1922, which favored the United States and Britain, added to the resentment.

Imperial Japan’s Appeal from America to the Indo-Pacific

Blacks in Japan should also be aware of the historic role played by Imperial Japan in American Black history. Japan as a challenger to white supremacy was an inspiration to many Afro-Americans.

Facing the Rising Sun (NYU Press, 2018) by Dr. Gerald Horne, a historian and prolific writer of Black history, covers in detail the struggle for justice and the appeal of Imperial Japan to Afro-Americans in their long struggle for equal treatment in the United States.

While not directly related to Blacks, World War II in the Pacific was mainly fought by Japan against European colonial powers. Although Japan was defeated, WWII spelled the end of the colonial era in Asia. History books are sadly lacking about objective details of Japanese actions and policies in Southeast Asia during WWII, with most brushing it off as a continuation of Nanking, with raping and looting of the local populace.

Not much has been written about the Indian National Army, which fought to liberate India from the British. They were supported by Japan and fought alongside Japanese forces in Burma. Many, if not most, of the army members were former Indian soldiers of the British Army, which had surrendered in Singapore. Their number was estimated at over 40,000. After the end of WWII, their leader, Subhas Chandra Bose, was killed when his Japanese military plane crashed while en route to Russia with Japanese officers as escorts to continue his fight for Indian independence. His remains are enshrined in a temple in Tokyo.

After Japan’s defeat, members of the Indian National Army were tried as traitors in India. Many considered them heroes, and some say that the publicity generated at the trials hastened the end of British rule in India.

Bringing up this historical background is not intended to prove that the Japanese people are the saviors of colored people or free of racial prejudice. It is to provide an objective perspective of Japan’s historic attitude toward white and non-white races.

However, the Japanese are in fact very race conscious. There is no denying that during WWII the Japanese considered themselves as the chosen people. That ended with their defeat in WWII, and since then, to their credit, the Japanese have treated everyone with politeness and fairness.

Japanese attitudes toward Chinese and Koreans are shaped largely by the unrelenting hatred expressed by those two nations against the Japanese. Even then, no one is mistreated or barred from public areas or facilities because of national origin. In fact, Japan has a law against making hate speeches.

This does not mean that foreigners can “disappear” in a crowd. Japan is a largely homogeneous nation and foreigners, especially non-Asians, do stand out.

We often hear of foreigners complaining of biased treatment, such as no one would sit next to them on public transportation. There is an explanation for this, and it is not because of hate or contempt. More often than not, it is out of respect to provide personal space to an outsider or intimidation because of shyness. Eventually, as the Japanese become accustomed to foreigners, and vice versa, this should cease.

The odor of lotions, perfume, etc., may be another reason for the empty seat. The majority of Japanese lack the glands that necessitates the use of deodorants and do not splash themselves with deodorants and lotions.

Another aspect of the “different” treatment of non-Asian foreigners reaches back to the legacy of the occupation of Japan by the Allied powers. Occupation soldiers and their dependents enjoyed special privileges, including separate rail cars, to avoid mixing with the Japanese.

It is ironic that today we have foreigners, many from the victorious nations of WWII, complaining that the Japanese avoid them on public transportation when yesterday this was the policy enforced on the Japanese by Occupation authorities.

But whatever the reason for the empty seat next to foreigners, be assured it is not because of contempt.

As for those of mixed parentage, especially the young Japanese citizens who feel discriminated against by the Japanese, do not despair. While it may be tiresome and embarrassing to be the focus of attention for being “different,” do not let that get you down. You are special, and successful. In time you will cease to be an oddity.

You are fortunate in having twice the heritage as those of unmixed parentage. This vastly expands your capacity to appreciate the best of two cultures. Use it to your advantage. To some who feel otherwise, I would like to leave these words by my older brother who was probably quoting some other: “Any person who is ashamed of his God-given heritage is not fit to live!”

There is some opposition to BLM demonstrating in Japan because it is taken as an insult. It is felt foreigners are treated fairly in Japan and the protest is taken as a slap in the face.

However, the main reason for the opposition is its potential for creating social unrest leading to crime and terrorism.

While this may not be the driving motive of Ms. Todd in organizing the BLM march, the potential for her BLM efforts being infiltrated or taken over by Antifa or other communist-driven or anarchist group is a reality. Also, having a BLM movement in Japan as a demonstration of support for the BLM in the United States — with its attendant criminal activities and violence — is questionable as being in the best interest of Blacks in Japan. Instead of compassion and sympathy, Japanese attitudes could quickly change to uneasiness, even anger and disgust.

Finally, a word of caution to non-Japanese activists in Japan. You are not in your own country. You are a foreigner in Japan. According to Dr. Colin Jones of Doshisha University in Kyoto: “The rights guaranteed by the Japanese Constitution apply to Japanese citizens. The fundamental rights also extend to foreigners, EXCEPT THOSE WHICH APPLY TO JAPANESE NATIONALS ONLY (highlight mine).”

Precedent indicates this does apply to political activity by non-Japanese. Some years ago, an American residing in Japan was denied renewal of his visa for engaging in political activity. He was a long-term resident of Japan with a home and Japanese wife. Even then, he was no longer welcome in Japan. So, whatever you do, obey the law.