‘Ukraine Might Be Tomorrow’s East Asia’: Kishida in the UK Signs Security Pact with Boris Johnson 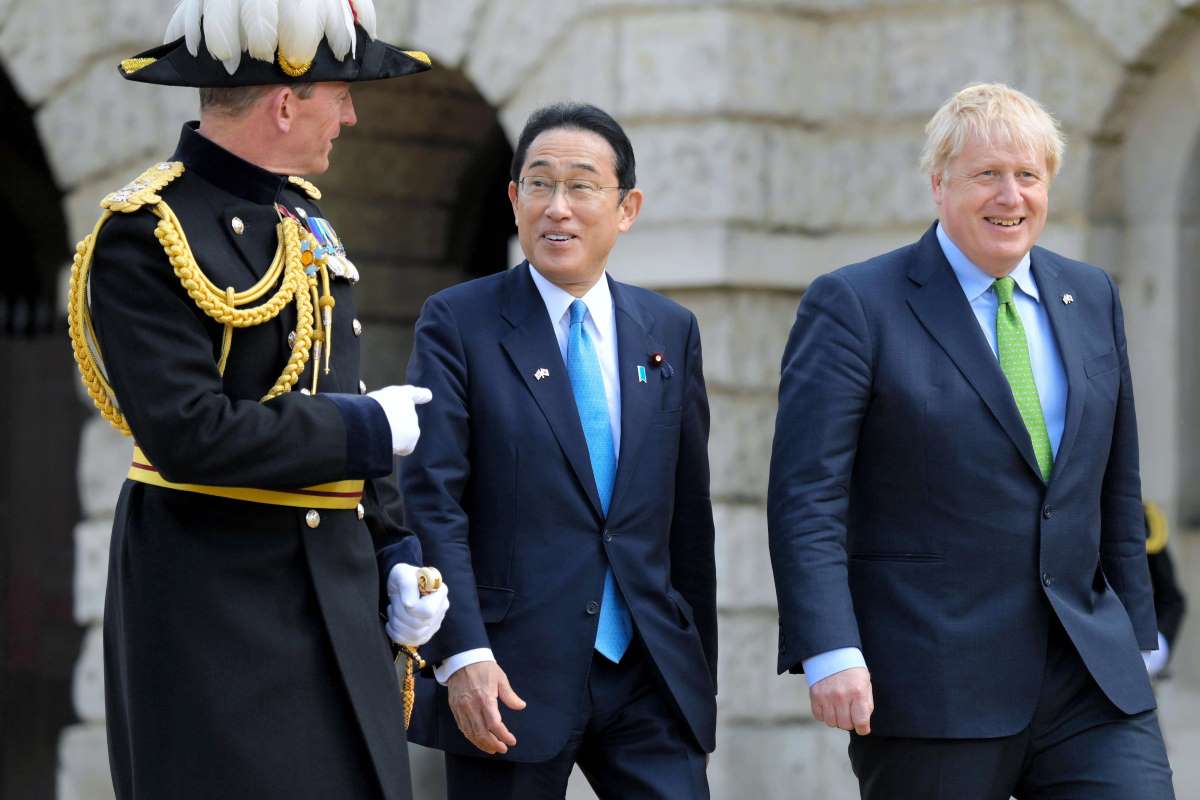 Prime Minister Kishida (center) and British Prime Minister Johnson (right) heading to the meeting with a smile after the honor guard = May 5, London (representative photo / joint)

Last but not least, it is often said.

Most recently this is the perception from the last leg of Kishida’s eight-day trip, which saw him visit leaders in Indonesia, Vietnam, Thailand, Italy, the Vatican. His Golden Week journey ended in the United Kingdom, where it brought visible results.

On May 5, Japanese Prime Minister Fumio Kishida met with British Prime Minister Boris Johnson, where the leaders reaffirmed the two countries’ closeness on matters such as international security and trade.

While Kishida was there, Japan and the UK signed a defense cooperation pact called the Reciprocal Access Agreement (RAA), which allows speedy deployment of troops once it goes into effect. The agreement also allows forces from the two countries to participate in joint exercises and disaster relief.

This is the first agreement of its kind between Japan and a European country.

The occasion of the agreement was lauded with the Royal Guard and a Royal Air Force (RAF) flyover above the Horse Guards Parade in central London.

Without pointing directly at China, the move by Japan and the UK is nonetheless seen as an effort for both countries to come closer together against the use of force to change the status quo in the Indo-Pacific.

"We in the UK recognize that our security in Europe is indivisible from the security ー our collective security ー in the Asia-Pacific, and in the Indo-Pacific region.” Johnson told the press, according to the BBC.

And there is direct read across from the actions of autocratic, coercive powers in Europe, to what may happen in East Asia. And that's why we want to work more closely together," concluded the British prime minister.

“Ukraine might be tomorrow’s East Asia,” said Fumio Kishida in a press conference following his meeting with Boris Johnson.

“Russia’s invasion is not just a problem which concerns Europe. The international order encompassing the Indo-Pacific is also at stake.”

Kishida continued: “We cannot allow a one-sided show of force in the Indo-Pacific.”

Japan has been at the forefront in sounding the alarm of China’s stance on Taiwan and the giant Asian country’s aggressive behavior toward its neighbors, especially in the regions of the East and South China Sea.

To drive home the point, the Japanese government also announced further sanctions to punish Russia for its invasion of Ukraine.

This announcement comes a mere couple of days after Russia’s May 4 announcement of an entry ban against 63 Japanese individuals, including Prime Minister Fumio Kishida and Foreign Minister Yoshimasa Hayashi.

Trade was also a key topic of discussion between the two leaders. As the United Kingdom left the European Union in 2020, it became open to other trade agreements.

Japan, which is part of the Comprehensive and Progressive Agreement for Trans-Pacific Partnership (CPTPP), has welcomed the UK joining the 11-country agreement as “an avid supporter,” in the words of Kishida in an afternoon speech in London.

In a sign of goodwill and while the leaders were eating popcorn from Fukushima, Johnson also told Kishida that the UK is set to lift all import restrictions on Japanese products. The measures had been in place since the Great East Japan earthquake and tsunami, which caused a nuclear accident in Fukushima in 2011.

Investing in the Japanese Economy

In an appeal at one of the key financial centers in the world, Kishida spoke in the City in London, asking for the British financial world to believe in the Japanese economy:

“The Japanese economy will continue to see robust growth. You can invest in Japan with confidence. Invest in Kishida,” he said.

The prime minister explained that “Japan is and will continue to be a trading and investment powerhouse open to the world.”

To this end, Kishida also announced that starting from June Japan will be further relaxing travel restrictions, “in line with other G7 countries.” (Japan previously had reinstated all visas except those for tourism.)

Appealing to investors, Kishida portrayed himself as the “most knowledgeable recent Japanese prime minister when it comes to the realities of the economy and finance.” He was alluding to the fact that he had worked in a financial institution for several years before going into politics.


A New Form of Capitalism

In his speech, the prime minister mapped out his vision of “new form of capitalism” as a vision to rejuvenate the Japanese economy, which has been struggling in the aftermath of the COVID-19 disruptions.

Painting a picture of a dynamic Japan, which in the past had seen the leadership of such global business giants as Akio Morita (the founder of Sony), Kishida pointed towards implementing: “A bold monetary policy, flexible fiscal policy and a growth strategy to stimulate private investment.”

Japan, like any other country, has been dealing with the headaches of the economic impact of COVID-19 and the war in Ukraine. Adding to the woes, the Japanese yen has been markedly weak in recent weeks.

“Kites rise highest against the wind ー not with it,” said Kishida in a conclusive flourish at the end of his speech in the City of London.

“I am now reflecting on the words of Sir Winston Churchill. The Ukrainian crisis, the rise of authoritarian states, climate change and inequality. In this world under [a] raging storm, I shall remain unperturbed against the heavy wind.”

And in fact, from Kishida’s busy international schedule, it looks like the storm might just be at its beginning.

On May 11 he is scheduled to meet Finland’s Prime Minister Sanna Marin. And on May 11 Kishida will meet with the leaders of the European Union, including Ursula von der Leyen, President of the European Commission.

In the coming weeks, several leaders of Asian countries are set to visit Japan, Kishida said, according to NHK.

The Japanese PM is set to attend the G7 meeting in Germany in June.