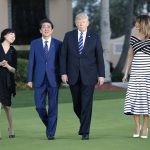 While Prime Minister Shinzo Abe is in the United States for a summit with President Donald Trump, JAPAN Forward runs a series of articles that provides a closer look at the Japanese leader. Originally published in Japanese in the January 2018 edition of Hanada magazine, the articles were written by Professor Tomohiko Taniguchi, Special Advisor to the Prime Minister.

Part 2: ‘Abenomics’: Fighting Pessimism to Secure the Future for the Young

Abenomics has been a landmark legislative and policy boon for Japan. We expect the fruits of these reforms to continue far into the future.

Apart from economic reforms, Prime Minister Shinzo Abe wishes to change Japan’s Constitution. However, for that to happen, he must rely on the judgement of the Diet—Japan’s parliament—and, ultimately, the voters.

Prime Minister Abe is also of the view that Japan needs a stronger military.

However, in whatever this administration does, whether it be making Japan sturdier or promoting education and the sciences, welfare demands weigh heavily on our minds. This is why, in Prime Minister Abe’s estimation, it is the economy first, the economy second, and the economy above all. The long road leading to the future can only start from there.

Abenomics, which began as an assortment of short-range “bazooka” shots to the economy, has shifted to become a collection of long-range reforms. Prime Minister Abe is no longer trying to wrangle the economy over a timespan of a year or two. He is envisioning the era when today’s youth will have become about his own age. His economic policies must work to their benefit, for their future. That is precisely why I say we are fighting a very long game on our domestic front.

At the start of the second Abe administration, the Prime Minister gave his close aides one instruction. There are four weekends in a month—for two of those, they must go around all of Japan to see how the economy is doing, meet people they would not normally meet on weekdays at work, and always visit areas afflicted by disasters, such as the Tohoku region in Northeast Japan. Lastly, they must travel abroad.

In other words, for two weeks a month, Abe’s aides are expected to keep up a strict work regimen of Monday-Monday-Tuesday-Wednesday-Thursday-Friday-Friday.

Chief Cabinet Secretary Yoshihide Suga works exceptionally hard. Given the strong work ethic of the Abe Cabinet, this is really saying something. His daily schedule involves waking up at 4:00 or 4:30 AM to check through every single daily, weekly, and monthly print media, including magazines such as Monthly Hanada, before working up a good sweat walking with his security guard. He then moves to a hotel breakfast meeting with someone or other from 7:00. He does this every day, even if he has a cold or a fever.

Ask any senior Cabinet staff members who have seen administrations rise and fall over many years. They will tell you that they have never seen a Prime Minister or a Chief Cabinet Secretary who works this hard.

When the Prime Minister and the Chief Cabinet Secretary took the initiative and set the example of throwing themselves into their work—so much so that they forgot even to eat and sleep—they transformed Kasumigaseki, the government district in downtown Tokyo.

People realized that the Abe administration meant business. The administration went from being underestimated by bureaucrats to being feared by them. It was a sea change in how the government operates.

Just as Prime Minister Abe asked his aides to tour Japan two weekends every month, he himself vowed to go abroad once a month, meeting leaders and assessing the global situation. By November of 2017, Prime Minister Abe had gone abroad in an official capacity 59 times, more than any other prime minister in Japanese history. The government jet he uses has flown longer than the distance between the Earth and the moon.

The Prime Minister’s goal, he says, is a diplomacy that “takes a panoramic perspective of the world map.”

The earth is vast. The oceans that cover the earth are wide and deep. Japan is surrounded by ocean on all sides, and she has allies in every corner of the globe, so she should be able to feel safe.

One of Abe’s goals is to show this to the Japanese people. He wants to build up their confidence, helping them feel secure in moving around the world with the knowledge that they can take the initiative and change things for the better.

Further, he wants Japan to stand proud, moving into the decades ahead in a broad and stable strategic environment. This is the other long game on which the Abe administration is hard at work.

Knowing Who Our Friends Are

Even without looking at a map, it is clear that Japan exists in a claustrophobia-inducing, blind-alley-like region.

Around us are countries that do not share our values, and that have made military threats the centerpiece of their diplomatic activities. This is exactly why Japan must continue to demonstrate, both at home and abroad, that it is connected to its staunch allies across the globe. This is a belief that Prime Minister Abe consistently upholds.

For this, more than anything, a reinforcement of Japan-U.S. relations was imperative.

The administrations of the Democratic Party of Japan (DPJ), while paying lip service to the primacy of the Japan-U.S. alliance, included a drift towards China, causing a rift between Japan and the United States. When U.S. President Barack Obama came to Japan and made an important speech in Tokyo, then-Prime Minister Yukio Hatoyama, a DPJ member, was elsewhere at the time.

Confluence of the Two Seas

At the same time, Prime Minister Abe has greatly expanded Japan’s strategic space to include the Indian Ocean. The Prime Minister has deep feelings for India, a fondness that was shared by Abe’s grandfather, Nobusuke Kishi. When Prime Minister Abe visited India during his first administration in 2007, he advanced a grand strategy foretelling of today’s relationship in a speech before the Indian Congress called the “Confluence of the Two Seas.”

It is a strategy that views the Indian Ocean and the Pacific Ocean panoramically, as a conjoined seascape and not as a non-contiguous landscape. The aim of the strategy is the pursuit of peace and prosperity throughout the larger Indo-Pacific region in which democracy, a free and open order, and the rule of law all flourish.

With the rise of the Trump administration, this vision has become the common objective of both Japan and the United States. Great maritime democracies such as Australia and India have joined, to become the pillars that support the Indo-Pacific.

The relationship between Indian Prime Minister Narendra Modi and Prime Minister Abe is exceptionally strong, and the easy communication the two leaders enjoy with one another is founded on a deep commitment to shared values and ideals.

In Australia, which has a small population, Chinese Australians are gradually accumulating political power. At the same time, this is forcing Australia to re-examine what it truly is. The Australian identity, which values democracy and human rights, is moving Australians to seek out Japan as a partner.

Showing the world that Japan stands firm with countries that hold similar values will increase Japan’s political capital and warn off other nations that might seek wantonly to interfere in the peaceful diplomacy and commerce of Asia and beyond.

At the same time, the Prime Minister wants Japan’s young people, so pessimistic about the future, to know that Japan stands shoulder to shoulder with its democratic allies and partners, and that the region is trending toward a brighter future. This is connected to raising economic expectations as well.

Prime Minister Abe believes that by securing Japan’s neighboring waters and regions, it will be easier in turn to pursue his domestic long game of rebuilding the Japanese economy. Abe diplomacy and Abenomics are complementary and mutually-reinforcing.

After graduating LL.B. from the University of Tokyo in 1981, he spent 20 years in print journalism before joining the Foreign Ministry in 2005 as Deputy Press Secretary. Until he left the ministry in 2008 he addressed the foreign press and wrote policy speeches. In 2013 he joined the Abe administration as Cabinet Councillor before assuming current posts in 2014. For more than five years now he has worked as Shinzo Abe’s primary foreign policy speech writer (although he does not openly admit it).