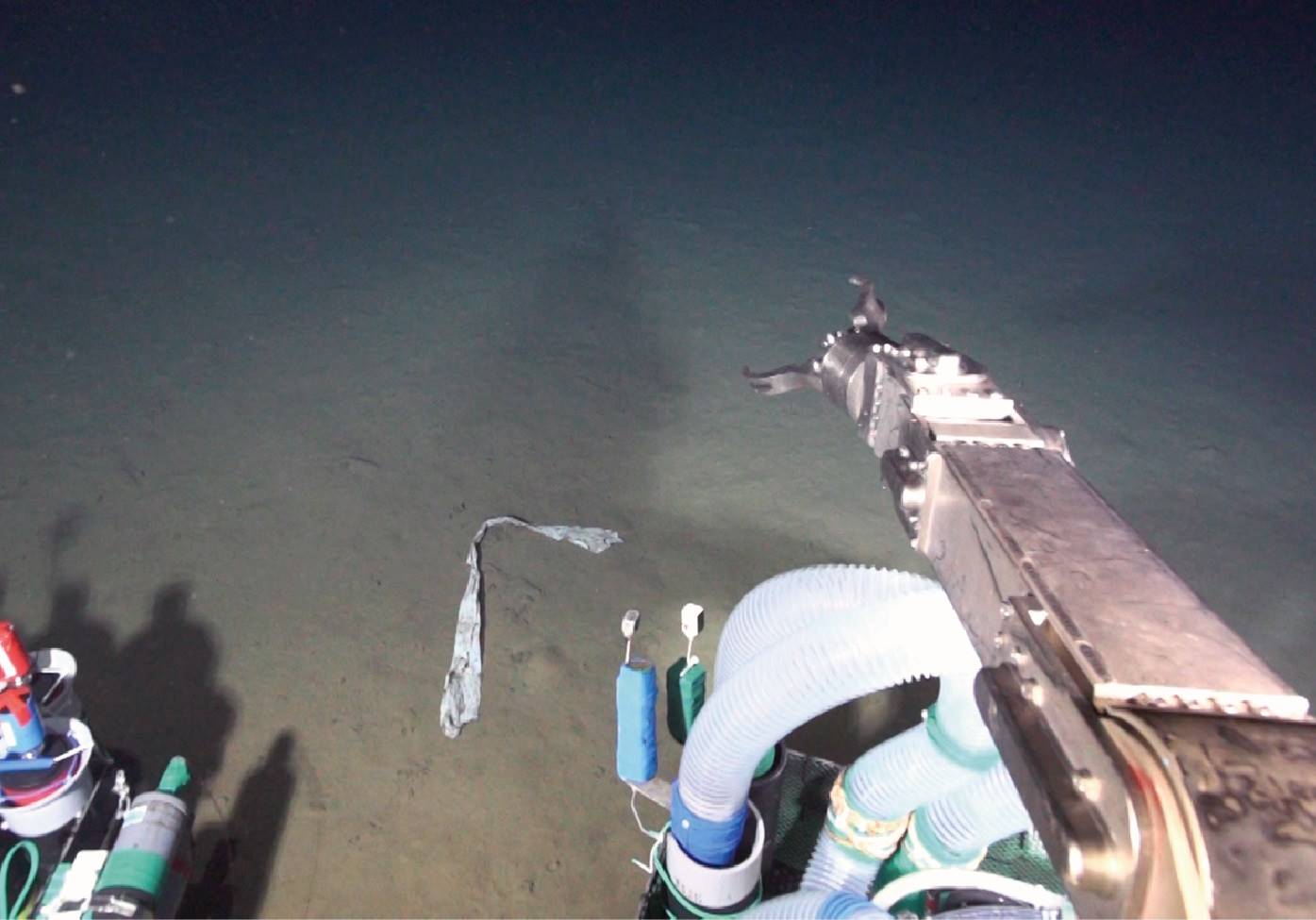 Using the SHINKAI 6500 to survey plastic waste on the deep seabed.

We know that plastic used for shopping bags and food packaging pour into the seas as waste, but what happens to them after that is largely unknown.

Recently, though, a survey conducted by the Japan Agency for Marine-Earth Science and Technology (JAMSTEC) confirmed the existence of a “marine-plastic graveyard” with a high density of accumulated plastic waste. It sits at a depth of about 6,000 meters on the abyssal seafloor, around 500 kilometers southeast of the Boso Peninsula (Chiba Prefecture), where the Kuroshio Current swirls.

The deep sea’s ecosystem is already starting to change as a result of the plastic, as marine organisms have settled in the area. Experts in the field are raising the alarm, stating that a vigorous campaign should be undertaken to reduce plastic waste.

When the crew of the survey mission crew aboard JAMSTEC’s SHINKAI 6500-manned research submersible saw the shocking sight, together they exclaimed: “Never have I seen a deep seabed with so much plastic waste.” “They’re scattered everywhere. It’s shocking.”

The extent of deterioration was minor due to very low water temperatures. The crew even found a plastic hamburger package with the date it was made still legible — about 40 years ago.

The waste on the seabed is not so dense that it covers the entire space. However, according to the research team, the quantity of debris found in these waters averages up to around 4,561 pieces per square kilometer. In a past survey conducted at another deep seabed more than 3,500 meters deep, only 80 to 90 pieces of debris were found.

The fact that the debris bed has grown by multiple digits shows that the ocean floor has truly become a graveyard for marine plastic waste.


A Region of Ocean Vortices

More than 10 million tons of non-biodegradable plastic waste pours into the seas around the world annually and impacts the ecosystem. Approximately half of the amount comes from East and Southeast Asian countries, and much of it is believed to spread by riding the Kuroshio, or Japan Current.

However, only around 440,000 tons of debris has been confirmed floating on the ocean surface. The vast majority of waste had disappeared, and it was assumed that much of it had sunk to the bottom of the sea relatively close to land.

But the research team set their focus on an area some 500 meters away from the southeast coast of the Boso Peninsula. The sea region there is located along the inner part of the curve where the Kuroshio Current, which flows northward along the Pacific side of Japan, makes a giant turn to the east. The area is known for a number of swirling ocean vortices with diameters of 100 to 200 kilometers, which generate and dissipate repeatedly.

It was theorized that plastic debris carried by the Kuroshio from the south was caught in the vortex whirlpools and, as they swirled around, they sank to the bottom of the sea and accumulated. The actual research proved the hypothesis to be correct and invalidated past theories.

The Kuroshio tends to curve and form whirlpools off the coast of other parts of Japan, including Shikoku, as well. There, an even larger whirlpool is generated, and compared to the Boso coastline, there is a possibility that a much bigger marine plastic graveyard has been formed. JAMSTEC plans to survey the area this summer.

Organisms such as starfish and anemones were attached to most of the plastic waste found on the deep seabed off the coast of the Boso Peninsula, and the ecosystem has already shown signs of being affected. These organisms usually live in rocky areas that support their bodies and are not normally found in the muddy deep sea. If these creatures increase, then their predators will also come, leading to concern over other changes to the deep sea landscape.

Furthermore, there are also tiny plastic pieces called microplastics, which form into fine fragments when the plastic waste breaks down. They may contain harmful chemicals, and if microorganisms that swallow them are eaten by small fish, which are then eaten by bigger fish, harmful substances will become concentrated inside their bodies.

Currently, there are no fisheries taking place in 6,000-meter deep waters. But as technology advances, fishing grounds are becoming deeper, raising concerns about the impact on our supplies that reach our kitchen tables in the future.

Is there a way that the marine plastic graveyard can be cleaned up to relieve our concerns? Ryota Nakajima, vice chief researcher at JAMSTEC, says: “That would be impossible. Sadly, what we have now will always be there.”

Even recovering plastic waste on the ocean surface is difficult and considered economically unfeasible. Employing submarines that are capable of reaching the 6,000-meter deep sea floor would be especially challenging.

The only way to curtail the problem is to speed up the reduction of plastic consumption. “We hope to continue to scientifically demonstrate the true state of the ocean floors and change the world’s awareness on plastic waste,” Nakajima said.

(Find access to The Sankei Shimbun story in Japanese at this link.)