On the 260th anniversary of his birth, the life of Japan’s most famous artist is finally on film!

Hokusai, the movie, was originally scheduled to be released in the summer of 2020, but was postponed to 2021. JAPAN Forward managed to see an early preview of the film at the Tokyo International Film Festival (TIFF), where it was shown as the festival’s closing film.

Hokusai the film tells the story of Hokusai’s maturation as an artist in four segments—from his early life as a rebellious artist who could not commit to one style or school, to his creation of the Great Wave and another late masterpiece in the final two decades of his life. 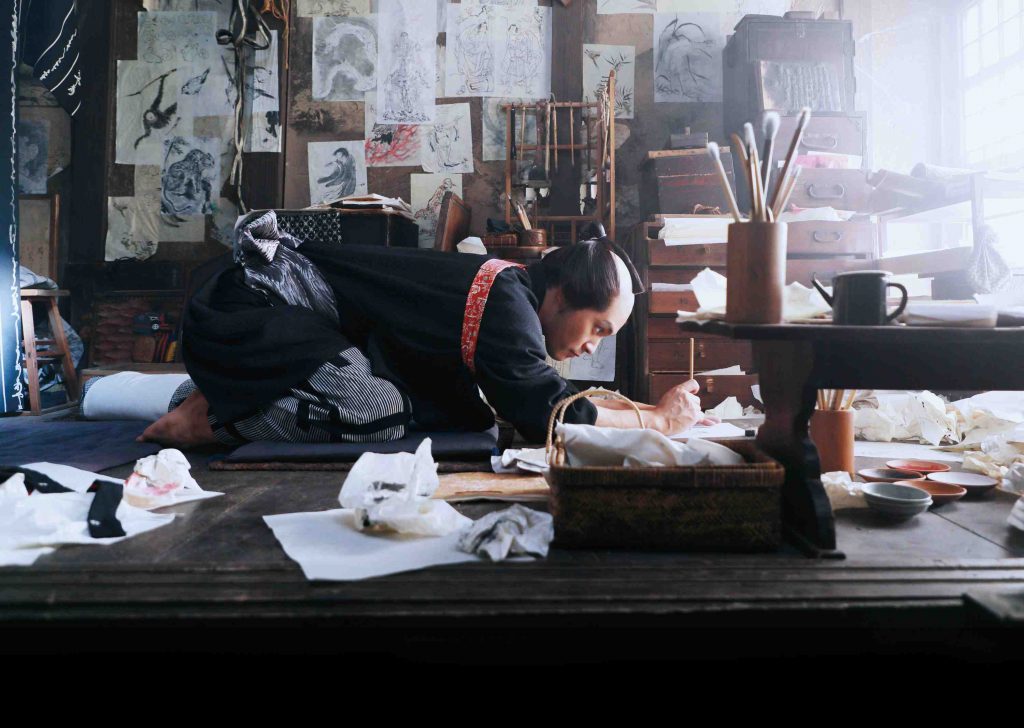 In the first half of the film, Yagira Yūya, best known for his Best Actor award-winning role in the Kore-eda Hirokazu film Nobody Knows at the Cannes Film Festival in 2004, takes on the role of Hokusai. This part is very much a who’s who of the ukiyo-e world around the turn of the 19th century, with appearances of ukiyo-e masters such as Kitagawa Utamaro (Tamaki Hiroshi) and Toshūsai Sharaku (Uragami Seishū), and novelists such as Tanehiko Ryūtei (Nagayama Eita) and Takizawa Bakin (Tsujimoto Yuki).

The film is a long overdue cinematic tribute to these influential figures, who deserve equal footing with Japan’s historical heroes, the subject of Japan’s yearly Taiga dramas.

The makers of Hokusai also did not overlook the important role of publishers as the savvy masterminds who discovered and patronized ukiyo-e artists such as Tsutaya Juzabūrō (Abe Hiroshi). It is they who confronted the samurai government, who viewed the plebeian ukiyo-e prints as vulgar and morally corrupt because of their hedonistic subjects. This remains an important theme throughout the film.

The historicity of the film, including the stunning set of the commoner districts of Edo (present-day Tokyo) and the Yoshiwara pleasure district, deserve praise. At the same time, the writers may have taken a bit too much liberty in the episodes portraying Hokusai’s early life, a period still shrouded with mystery. For the sake of conflict and drama, Hokusai is depicted as a proud young man who enters into conflicts with everyone in the ukiyo-e world.

Nonetheless, the hypothesis posed by the film that Hokusai’s Great Wave was inspired by a near-religious experience on the beach of Kanagawa, is an interesting one. This is particularly so, considering that Hokusai depicted religious subjects throughout his life. 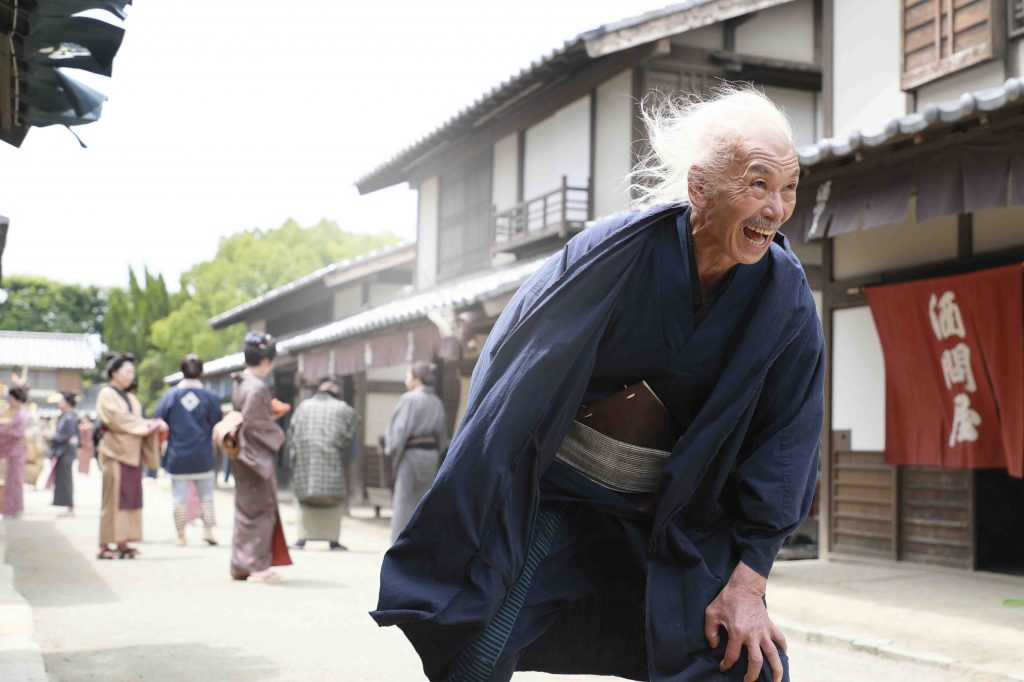 It is the stronger historical basis of Hokusai’s later life and more focus on the artistic process itself that make the second half more compelling.

In this part, Hokusai is performed by the actor Tanaka Min, a dancer who only started acting in period films and television series in the early 2000s. His sage-like appearance and stage persona fits the widely held idea that Hokusai had an obsessive and eccentric personality. Hokusai’s tremendous output as an artist, even in his late eighties, and comments stating he might be a worthy artist when he becomes a hundred years old, attest to this notion.

In the background, the conflict between the samurai and plebeian ukiyo-e remains an important subplot. 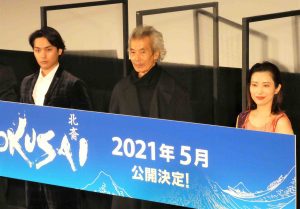 One of the writers Hokusai occasionally provided with illustrations for his books, Ryūtei Tanehiko, struggles to continue his work because he is of samurai caste himself. While it was not uncommon at the time, writers and artists of samurai status who wrote light fiction and designed ukiyo-e often faced stigmatization. The film posits an interesting hypothesis that it was tragic events involving Tanehiko that inspired Hokusai to create one of his eerie late masterpieces.

A lyrical scene showing the full creation of the Great Wave, from Hokusai’s design when he is already in his seventies to its cutting, printing and selling to the public, is one of the most inspired scenes of Hokusai. As the film reaches its final segment, it becomes more and more poetic.

In one scene, Hokusai made a trip on foot of over a hundred kilometers while in his eighties to visit one of his patrons in Obuse. The scenes include beautiful landscapes and a great scene showing Hokusai drawing two of his best works.

Like the Great Wave, these masterpieces also involve waves.  They can now be viewed at the Hokusai Museum in Obuse, Nagano Prefecture.

(Find other articles in this series here.)