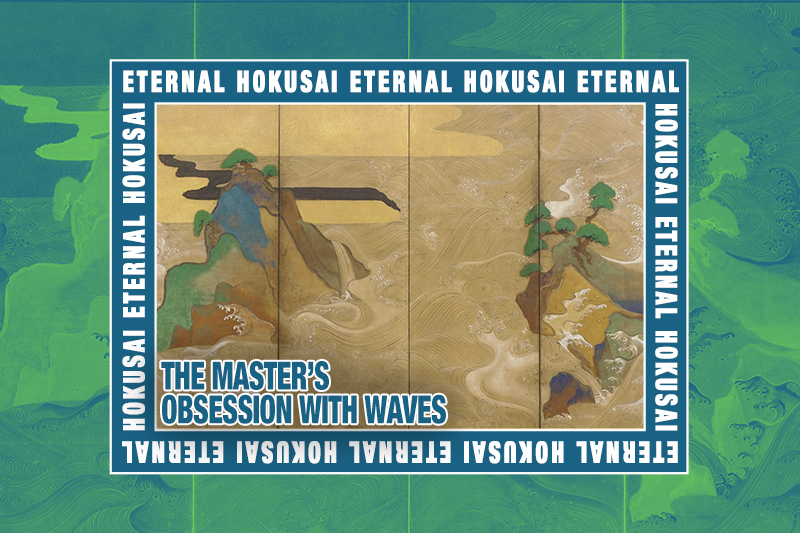 (Above) Waves at Matsushima (17th century) by Tawaraya Sōtatsu

Part 6 of a series marking the artist’s 260th anniversary

A century and a half before Hokusai designed his iconic wave, the great haiku poet Basho described the wild Japan Sea off the remote island of Sado in one of his most famous verses.

Basho was not the first Japanese poet to describe the rough sea in his work. The poet Kakimoto no Hitomaro described Japan as an island “hidden by a thousand lapping waves” around the turn of the 8th century. In ancient times people in Japan believed that waves encircled the Japanese islands and protected them from outside intruders.

In painting too, artists like the painter Tawaraya Sōtatsu created dynamic depictions of waves between the Pine-clad Islands of Matsushima, one of Japan’s Three Great Views (the other two are the Sandbar of Amanohashidate in Kyoto and Itsukushima Shrine in Hiroshima). Like Hokusai’s “Great Wave”, Sōtatsu’s large pair of six-panel folding screens was acquired by a foreign collector around the turn of the 19th century, half a century after Japan’s ports had been opened to various Western countries. 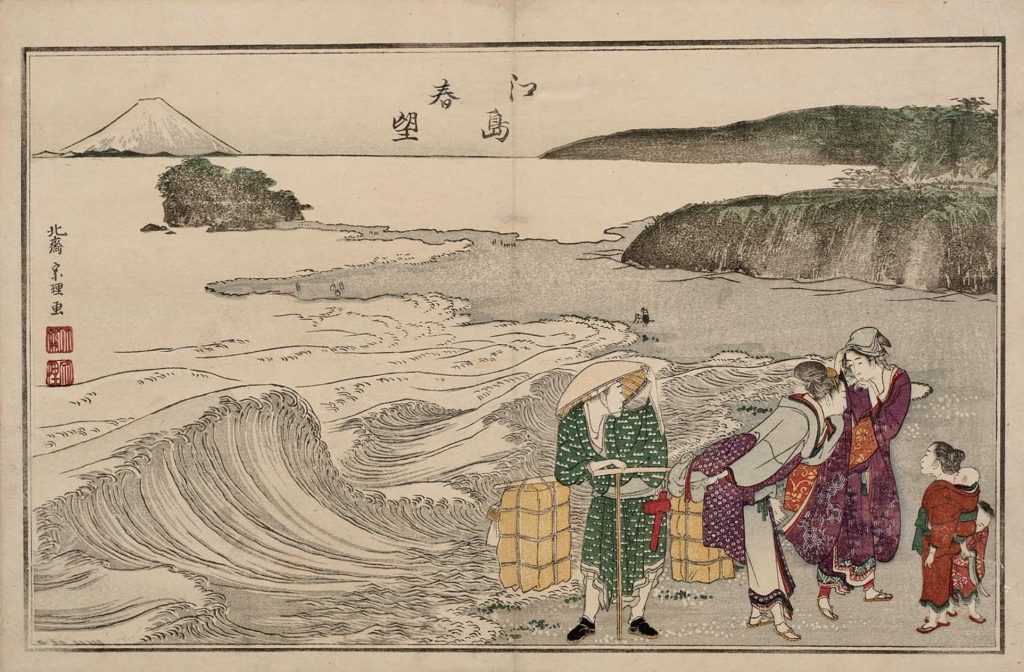 Yet no artist was more obsessed with waves than Hokusai. In his long career, spanning over six decades from the late 18th to the mid-19th century, Hokusai left us with numerous waves in paintings, book illustrations and woodblock prints. Through these numerous works, we can trace the development of the Great Wave, which has contributed immensely to the way people visualize waves around the world today.

The genesis of Hokusai’s “The Great Wave” could be said to start with his Spring at Enoshima from the album The Threads of the Willow, which was published in 1797. This illustration shows Enoshima Island from a nearby beach, with Mount Fuji visible in the distance behind the island. Hokusai probably based this composition on a painting by Shiba Kōkan, a pioneering artist of Western painting techniques. However, the wave in the foreground is unmistakably Hokusai. 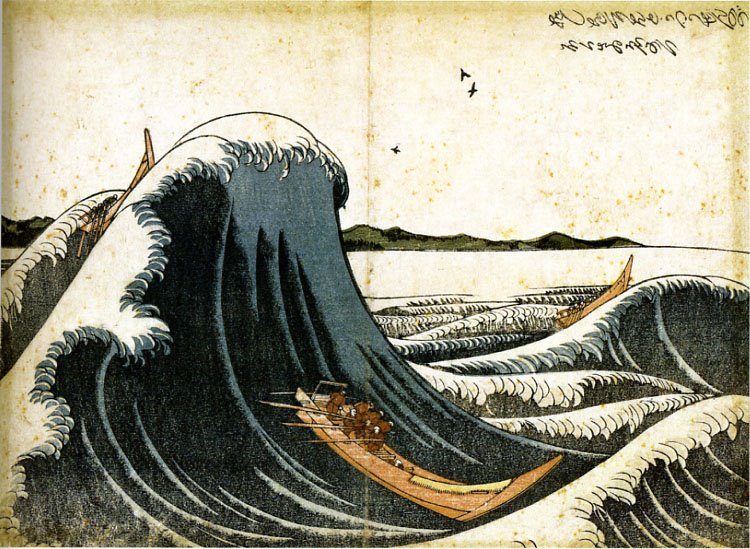 Within a decade, Hokusai decided to move his wave further off the coast. In Fast Boats Navigating Large Waves, designed about a quarter of a century before “The Great Wave”, we first encounter the three fast boats of his landmark composition.

This is still a bit static compared to the dynamic claw-like shape of “The Great Wave”, however. At the same time, it does demonstrate Hokusai’s thorough understanding of Western linear perspective, as discussed by Atsuko Okuda in the previous article of this series. 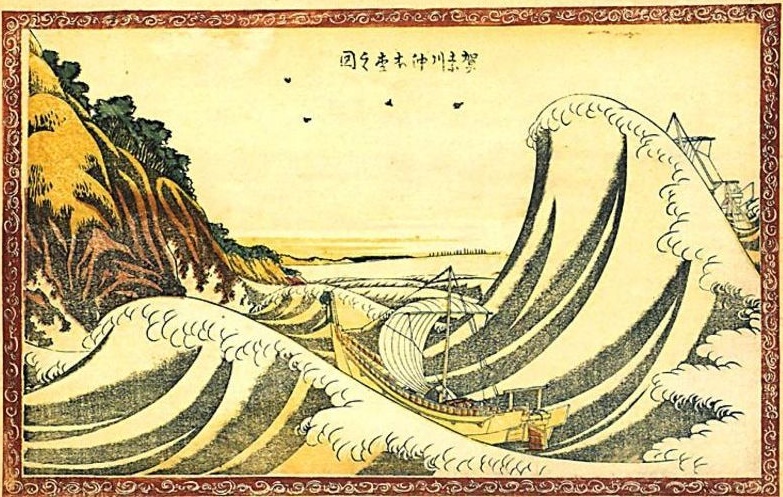 Only a few years later, Hokusai created another wave with boats around the same coastal area. This composition, entitled Honmoku, off Kanagawa shows two cargo boats with sails navigating around a colossal wave.

The wave in this composition probably most closely resembles “The Great Wave” of all waves Hokusai designed, although the placement of the boats of Fast Boats Navigating Large Waves is more similar to those in “The Great Wave”.

Hokusai’s dynamic depictions of water in Thirty-Six Views of Mount Fuji are not limited to ocean waves. In the print Mount Fuji Seen from Kanaya on the Tōkaidō Road he depicts merchants, travelers, and their cargo crossing the wild Oi River. This river separated the Kanaya station on its West bank and the Shimada station on its east bank, at the halfway point between Edo (present-day Tokyo) and Kyoto on the Tōkaidō Road.

At the time, bridges were rare on strategic routes. The samurai government opposed them for security reasons, so as to limit travel in case of rebellion. To cross a river, travelers could hire porters or go by ferryboat. Most of the travelers here are borne across on the shoulders of porters, while more wealthy travelers are carried across in palanquins. Hokusai masterfully highlights the power of the river’s currents with undulating lines and his characteristic small dots. 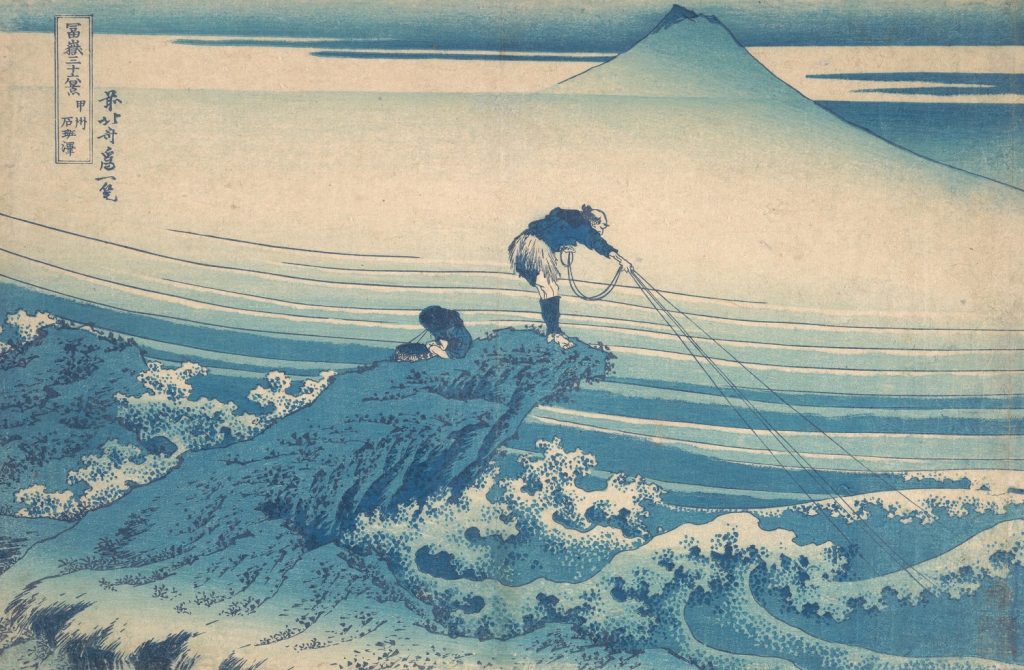 In another masterpiece of Hokusai’s Thirty-Six Views of Mount Fuji entitled Kajikazawa in Kai Province, Hokusai has created a spectacular scene of a fisherman and his son amid raging, turbulent waves. The foam of the waves crashes onto the rocks of the Fuji River at Fujikazawa, northwest of Edo, where wild currents mark the convergence of two rivers.

Like The Great Wave, this composition could be said to depict the dramatic struggle of humans attempting to survive amid the forces of all-powerful nature.