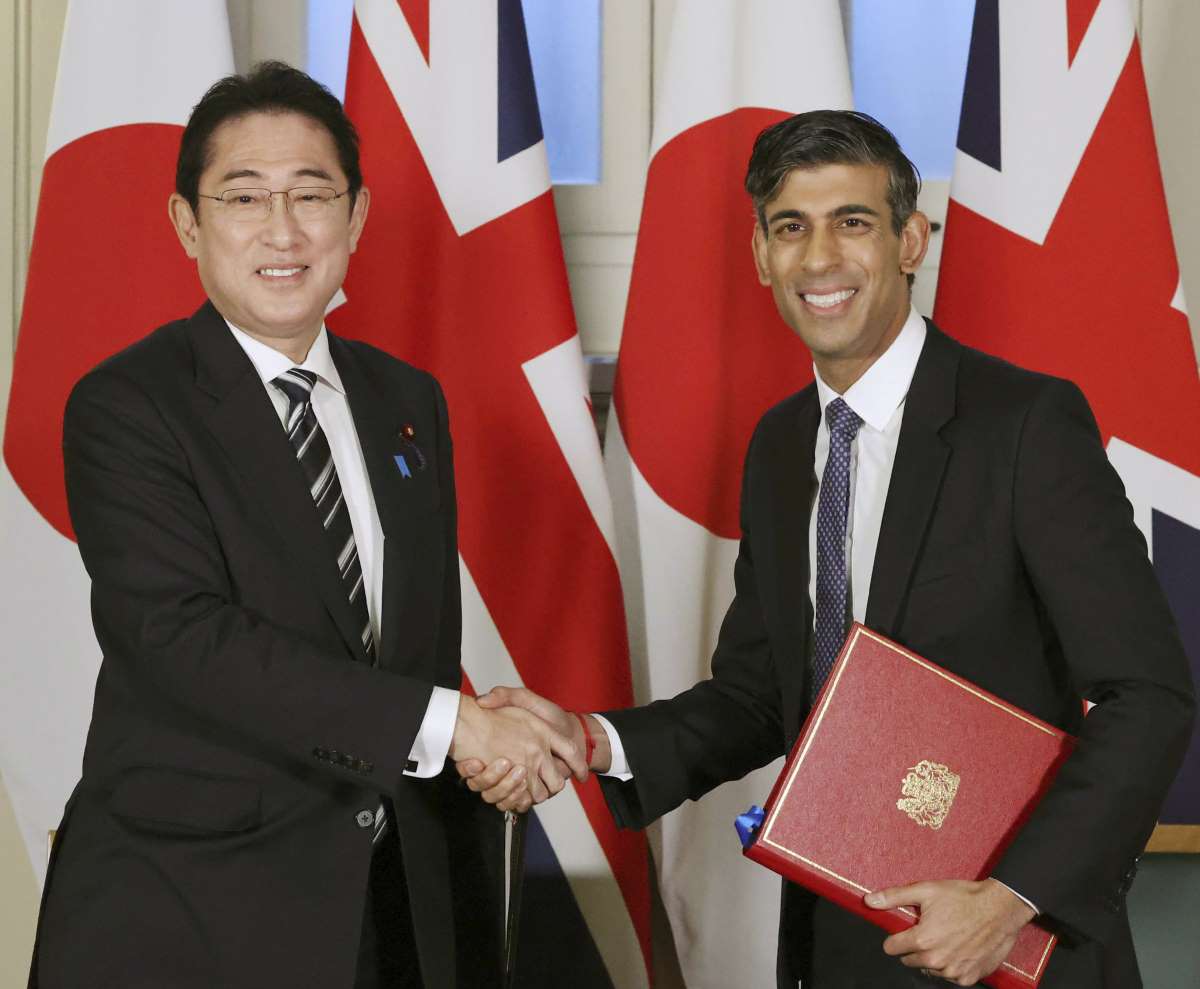 LONDON — On the afternoon of January 11 in the historic Tower of London, prime ministers Fumio Kishida and Rishi Sunak signed the Japan-United Kingdom Reciprocal Access Agreement to enhance bilateral defense cooperation. Among other things, the new defense pact will simplify procedures for holding joint training between the Self-Defense Forces (SDF) and the British military.

PM Kishida has just finished touring three European G7 countries, including Great Britain and Italy, in a bid to strengthen security cooperation with Western partners. Japan, the UK, and Italy recently reaffirmed their collaboration in the development of a next-generation fighter jet.

Speaking to the press, Kishida said, "Through their strategic partnership, Japan and the United Kingdom are assuming responsibility for addressing issues facing the international community."

Sunak welcomed Japan's revision of its National Security Strategy in December 2022. Touching upon the fact that Japan would serve as the G7 Summit chair for 2023, the British prime minister declared that the Japan-UK partnership was more important than ever.

Japan has a Status of Forces Agreement with its ally, the United States. And now Great Britain will become the second nation with which it has signed a reciprocal access agreement, following Australia.

The SDF and British military will now be able to participate in joint training and other activities. When doing so, procedures, such as for introducing weapons into the other country, will not be so cumbersome, however.

The reciprocal access agreement signed by Kishida and Sunak doesn't merely symbolize the deepening of security cooperation with the UK. In effect, it creates a "quasi-alliance" for Japan. The Japan-US alliance remains the cornerstone of Japan's diplomatic security. At the same time, as Russia's invasion of Ukraine has demonstrated, cooperation with allies and like-minded nations has become imperative in order to prepare for contingencies.

The UK becomes the first European country with which Japan has signed a security agreement.

On the same day as the signing ceremony, the UK government issued a statement, saying, "The UK will be the first European country to have a Reciprocal Access Agreement with Japan, the most important defense treaty between the UK and Japan since 1902."

That historic alliance came about in response to Tsarist Russia's aggressive expansion into the Far East. Currently, against the backdrop of the growing military threat from communist China in the Indo-Pacific region, the two countries are again seeking to strengthen collaboration.

The next-generation fighter development project is not the only security field in which the two countries are cooperating. In 2013, Japan and the UK signed an Agreement on the Security of Information to facilitate the exchanges of sensitive defense information, among other areas.

A few years later, the two parties signed the 2017 Acquisition and Cross-Servicing Agreement. That agreement allows the SDF and British forces to exchange supplies.

Both Japan and the United Kingdom are allies of the United States. The UK has also joined with Australia and the US to establish the AUKUS trilateral security framework.

Meanwhile, Japan, like its "quasi-ally" Australia, is in a region directly threatened by China. For that reason, the two have begun engaging in security cooperation.

"In order to counter unilateral changes to the status quo by force and such attempts and to ensure Japan’s security, it is extremely important to reinforce collaboration with not only our ally but also as many countries as possible. From such a perspective, Japan will promote efforts to contribute to realizing the vision of the FOIP."

This is an excerpt from the National Defense Strategy, one of the three key security documents adopted by the government towards the end of 2022.

The Japanese government is also very cognizant of the UK's capabilities for gathering information and shaping international public opinion. This has received much attention due to the Ukraine invasion.

More than a century has elapsed since the inking of the Anglo-Japanese Treaty of 1902. Still, it appears that Japan-UK relations are about to enter a new phase.