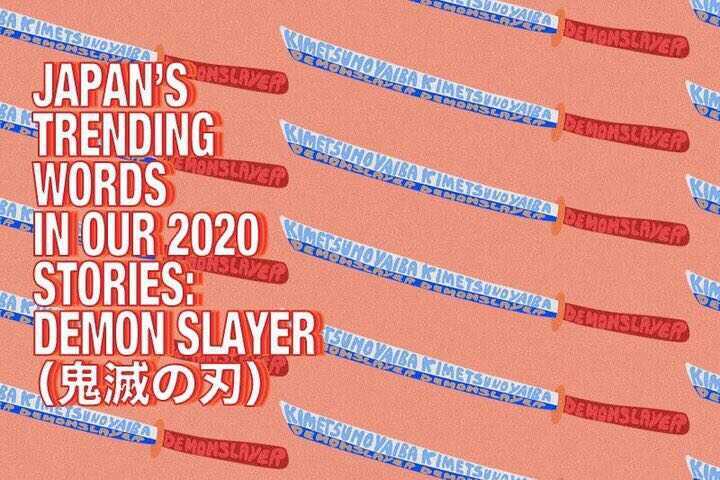 ~Despite the seemingly unimaginative trope of demons and zombies, the manga-then-turned anime has exploded among audiences both domestically and abroad.~

It’s no secret that COVID-19-related news and the fight against the virus has overwhelmed most of us this year. To mark this, JAPAN Forward has put together a special to wrap-up the coverage of COVID-19 in Japan, and how people managed to stay cheerful and resilient despite the times.

With one topic per day for five days from December 14 to December 20, make sure you stay tuned to the most popular topics among the Japanese this year!

This manga, then turned anime, narrates the story of a young man, Tanjiro Kamado, who loses his family to a demon.

The only family member that survives is his sister, who herself has been turned into a demon. In an attempt to restore her to human form, Tanjiro becomes a “Demon Slayer”ーpart of a special corps protecting humans from demons.

Despite the seemingly unimaginative trope of demons and zombies, the manga-then-turned anime has exploded among audiences both domestically and abroad.

The anime is viewable on Netflix, Amazon Prime, and appeals to a variety of age groups, sometimes very young. Especially during COVID-19, many turned to online streaming entertainment to pass the time. It is therefore no coincidence that the title of the series has become a trending word of 2020.

In our coverage on how people spent their time during the boredom of the COVID-19 State of Emergency in Japan, kids watching Demon Slayer made an appearance as well.

Small Victories Against Boredom: How Families Coped During Lockdowns

The anime was so popular that it even spurred debate on whether it could be an impetus to revive an interest in the culture of sword making in Japan, a historical craft in the country.

Martial Arts, Movies, Manga and Anime | The Many Gateways to Japanese Sword Culture

The popularity of the anime grew even more with the release of the film Mugen Ressha, which continues from where the first anime series left off. The film came out on October 16 2020, premiering right in the midst of the pandemic when Japanese were starting to venture out more to cinemas.

In a year with very few releases, the first few days of Mugen Ressha set a record high in box office sales, and the film is on its way to becoming the highest box office sale anime film in history. Re-live the day following the release below:

Wanting to understand the reasons behind the film’s success, we sat down with pop culture expert and commentator Matt Alt to get his take on the appeal of the manga and anime franchise. He explained several aspects of the background, including the possible theory that the author might be a woman.

‘Demon Slayer: Kimetsu no Yaiba’: Understanding the Appeal of the Blockbuster Movie

The film release has sparked further popularity in the series as a whole. So much so that tourist attractions are starting to appeal to Demon Slayer fans.

One temple sharing the name of one of the characters in the story claimed that it was the holy ground of the series, adding geography to the fantasy.

Another destination appealed to fans by creating a parallel with one of the scenes in the series.

But perhaps the most impactful thing for entertainment is when its popularity changes economic behavior.

On December 10, Sony Corporation announced that one of its subsidiaries would be acquiring Crunchyroll, the famous anime streaming website.

Sony also happens to be the owner of Aniplex, the anime production company that published the anime Demon Slayer, and now its latest installment Mugen Ressha.

It seems that whatever you might think of Demon Slayer, its popularity has influenced individuals and businesses in a big way in this year of the pandemic. The next question is: will the series manage to capture the imagination of those abroad?