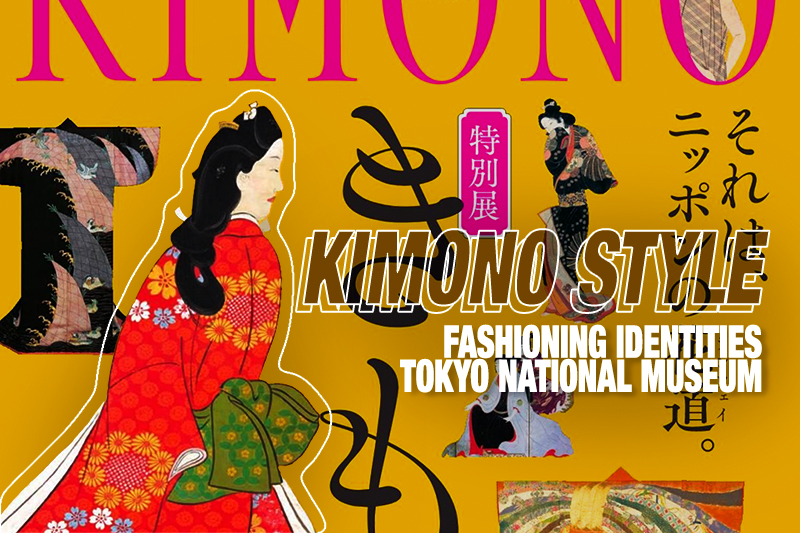 The opening of this exhibition was delayed due to coronavirus, and entry is by online reservation. Speaking is prohibited inside the museum building to prevent the spread of infection. The atmosphere is rather sombre in comparison with the joy with which one might normally approach such an exhibition.

The exhibition covers 800 years of Japanese dress, and it includes one of the best selections of kosode that I have seen. The kosode is the garment, originally inner wear, that morphed into what we now call a kimono. The selection of kosode rivals that which I saw in the Museum of Kyoto in their 2011 exhibition, “Kyo no Kosode” (Kyoto Kimono).

The earliest kimono in the exhibition, from the 16th century are short and wide, and the width of the sleeves is half that of the body sections. Mostly they have a white ground and the top and bottom have designs tie-dyed and sometimes embroidered on them.

Eventually the shoulder and hem designs, kata suso, give way to diagonal designs and the proportions of the garments become similar to the kimono with which we are familiar today. Originally the nobles and upper classes wore garments with sleeves that were open at the edges.

This was true of the junihitoe and other garments from the Heian period on. Underneath the layers was a garment with sewn-up sleeve openings, and this was the kosode, (small sleeve opening) garment that emerges during the Kamakura period as an outer garment, and eventually becomes the kimono.

Even before the Edo period, the skill of the dyers is incredible. Sections of a tie-dyed kimono from the Momoyama era show a complex pattern of diamonds with lattice work and checks on them, surrounded by sections with white leaves scattered on a green ground. The other half of the kimono would have had a red ground, and white flowers on the red sections. This left and right, red and green katamigawari style kimono has been reconstructed in order to see how the whole garment would have looked in the original colors, and it is a dyeing tour de force.

Tie-dyeing, embroidery, use of silver and gold leaf, nuihaku are the most common techniques of decorating garments of the early Edo period. In the mid Edo period the yuzen dyeing technique becomes fashionable among the wealthy merchant class. Sumptuary laws put expensive shibori and embroidery out of their reach, but yuzen enables them to enjoy gorgeously dyed expressive patterns like never before.

Yuzen enabled a freedom of design that would have been impossible with shibori or embroidery. Maples, plum blossoms, a whole variety of temple scenes and various objects were painted onto the kosode. Sometimes they were highlighted with embroidery, and there was a fashion for putting letters into the patterns. These were probably puns or poems for cultured people in the know.

The unlined garments with linen rather than silk grounds, called katabira, are some of the loveliest of all. The flower patterns appear so delicate and cool on the cream or brown linen, and many have retained their colors remarkably well.

Some incredibly lovely designs are also seen on the ukiyo-e prints that are also displayed, and in the pattern books, which were popular among Edo women. They functioned to spread styles, and as sample books for ordering kimono. The equivalent of fashion plates in Europe, they pre-date them by over a hundred years.

The large folding screens, byobu, show kimono thrown over hangers. In some cases real sections of kimono fabrics were preserved in this way, and in other cases the kimono are painted on. One is invited to imagine who the beauty was, that put their arms through these lovely painted kosode.

As the sumptuary laws took their effect, the later Edo period sees much less dynamism and color in the designs produced. Designs drop from being all over the kimono to the hem area, and instead of there being much colorful painting of the dyes, the paste lines themselves become the pattern and are seen against blue grounds.

Grey is also a trending color. And the understated Edo komon, which has an all-over stenciled pattern and appears plain from a distance, becomes prevalent, sometimes with small yuzen designs put on. Brown checks, and hem-only designs are the style of the day. But ukiyo-e reveal that women still enjoyed their kimono in layers, with at least one bright red undergarment, which is clearly visible at the edges.

Even at this time gorgeous gowns were produced for weddings of the elite, and there are several examples of stunning pieces in the show.

Not Only for Women

A really interesting section of the exhibition was on men’s fashion. Included were the tunics of Nobunaga and other warriors, and beautiful long-sleeved yuzen kimono as were worn by the samurai’s young boy attendants, wakashuu.  There is underwear of savvy men, such as a beautiful under kimono in sarasa-dyed cotton from India.

The highlight of this section however is the large collection of firemen’s jackets. These thickly-padded cotton jackets were adorned with all kinds of masculine symbols, such as eagles or thunderbolts, tigers and dragons, devils and tattooed superheroes, fighting their enemies.

These garments were reversible, being worn for work with the plain side out, and reversed to celebrate the extinguished flagration. Various accessories that men would hang from their obi are also on display.

The next part of the exhibition shows the increasingly colourful yuzen kimono of the modern period, with a flowering of color and designs inspired by art nouveau.

This section also traces the introduction of the mechanized processes that made kimono more easily available for people. The introduction of stencil yuzen, katayuzen, which meant that yuzen patterns were no longer one offs, but could be repeated, and meisen, which was a technique developed to imitate weaving, but was actually done with hogushiori, using threads to hold the warps (and or wefts) in place and direct dyeing at the thread stage using stencils. It was originally made with the left-over silk that was not suitable for export.

Some of the posters which were used to advertise meisen kimono are in the exhibition. The display in this part of the exhibition seems to have been inspired by that at the Victorian and Albert Museum, with meisen in high cases, up on the wall.

The final section of the show is actually the least satisfying. It is a nod to contemporary kimono without actually investigating all the exciting things that are happening.

Three living national treasures are introduced: yuzen dyer Moriguchi Kako, weaver of monsha (a summer cloth) Tsuchiya Yoshinori, and stencil dyer Suzuta Shigeto. A series of over kimono uchikake by Ichiku Kubota, who developed his own style of tie-dyeing flowers and scenes, Ichiku tsujigahana, are impressive. And there is another uchikake painted by artist Okamoto Taro.

Apart from these artists and artisans who are at the top of their field, (or are deceased), the only contemporary kimono designer represented is the musician from X Japanーand now kimono designer–Yoshiki. Manga are digitally printed onto fabrics which are sewn into kimono and matching obi. Kimono are folded and worn as dresses with heels. His silver and black check kimono also has a matching obi.

Yoshiki started making kimono in 2016 and presented a show at Amazon Fashion Week in 2017. Whether or not one can find a kimono aesthetic in his work is perhaps a matter for the individual, but he is a newcomer to the scene.

To have Yoshiki as the only contemporary kimono designer, fails to acknowledge hundreds of other contemporary designers and craftspeople who continue to innovate, and some who have their own outlets, all of whom are working in their fields producing exciting kimono that people are buying and wearing as every day and special dress.

Reservations are necessary and the exhibition goes through to August 23rd.

Additional Information: Additional information about the exhibition can be found at this website.