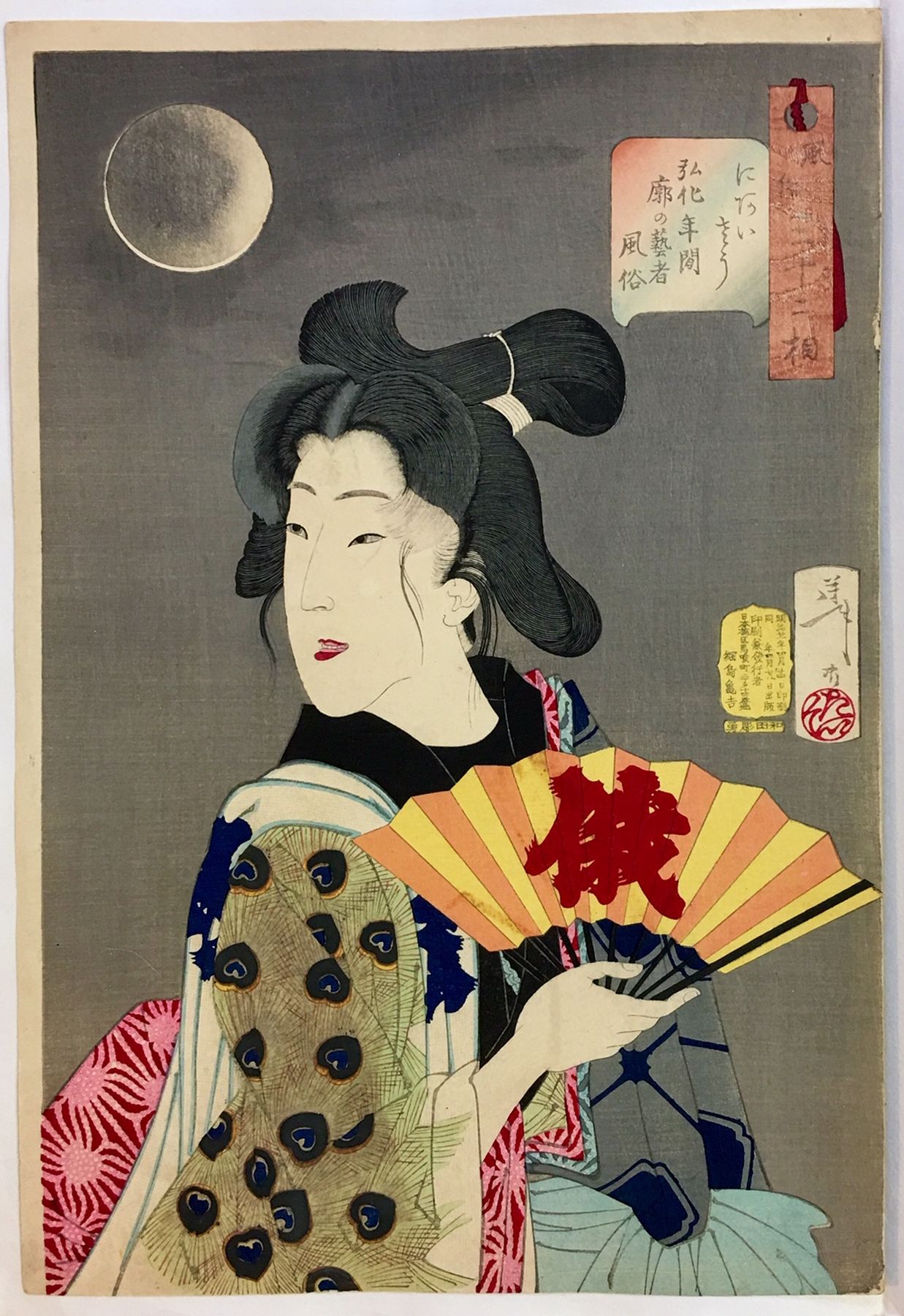 (Part 7 of a Series on the Art of Kuniyoshi)

Kuniyoshi was blessed with many disciples who revered their teacher. This fondness was mutual. Kuniyoshi maintained an ideal relationship with his disciples throughout his life.

Kuniyoshi’s personality and legacy were also passed on through the works of his disciples.

However, with rapid changes occurring in the Meiji Era (1868-1912), ukiyo-e changed dramatically. New chemical pigments were exported from abroad and became widespread, and “bunmei kaika” (civilization and enlightenment), the new government slogan that promoted rapid modernization, became a dominant theme in ukiyo-e.

The shrinking demand for ukiyo-e in the Meiji Era also led to the discharge of many of Kuniyoshi’s former disciples. For most of them, it became unavoidable that they change their profession. Only through the strenuous efforts of a few talented artists was ukiyo-e able to survive these difficult circumstances.

The first artist that should be mentioned here is Tsukioka Yoshitoshi (1839-1892). He was a late disciple of Kuniyoshi and his talent exceeded that of all the others. He became a pupil at 11 years old and was already assigned a war triptych when he was only 14 years of age. The result was exceptional. In the print Momotaro Throwing Beans, you can already see his personal style. 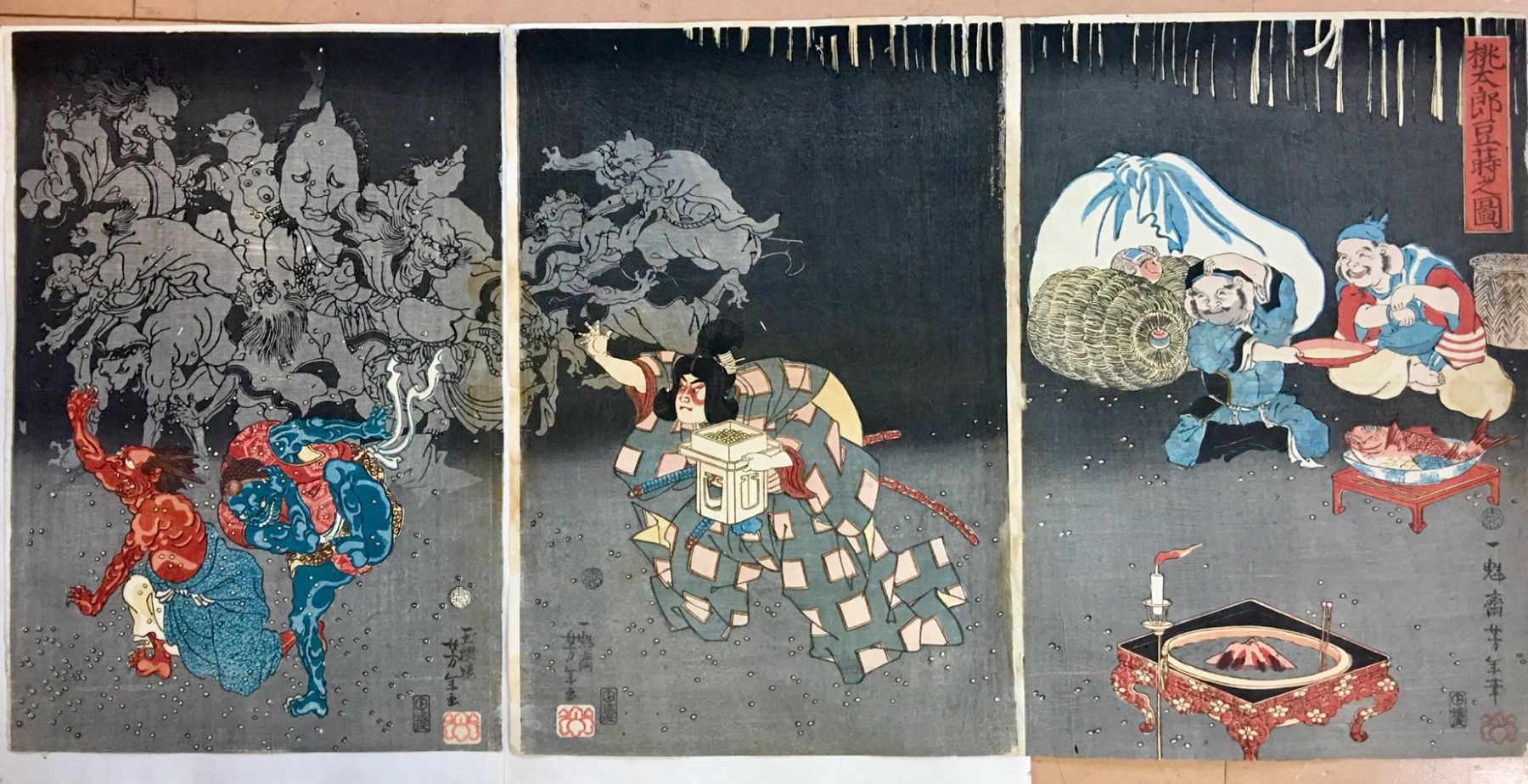 However, with delicate nerves resulting in a mental illness, Yoshitoshi spent most of his days in sorrow fighting his illness. Many of his works were born from these circumstances.

Suits Well, from the series Thirty-two Aspects of Customs and Manners, dates from Yoshitoshi’s mature period. In this work, Yoshitoshi’s beauties don’t possess the morbid expression found in some of his other works. They are beauties that embody the spirit of the new Meiji Era.

One Hundred Aspects of the Moon was Yoshitoshi’s final print series and it takes the moon as its central motif. This series possesses an elegant style rarely found in ukiyo-e, but lacks the heart of ukiyo-e. We can probably attribute this deterioration to Yoshitoshi’s illness. 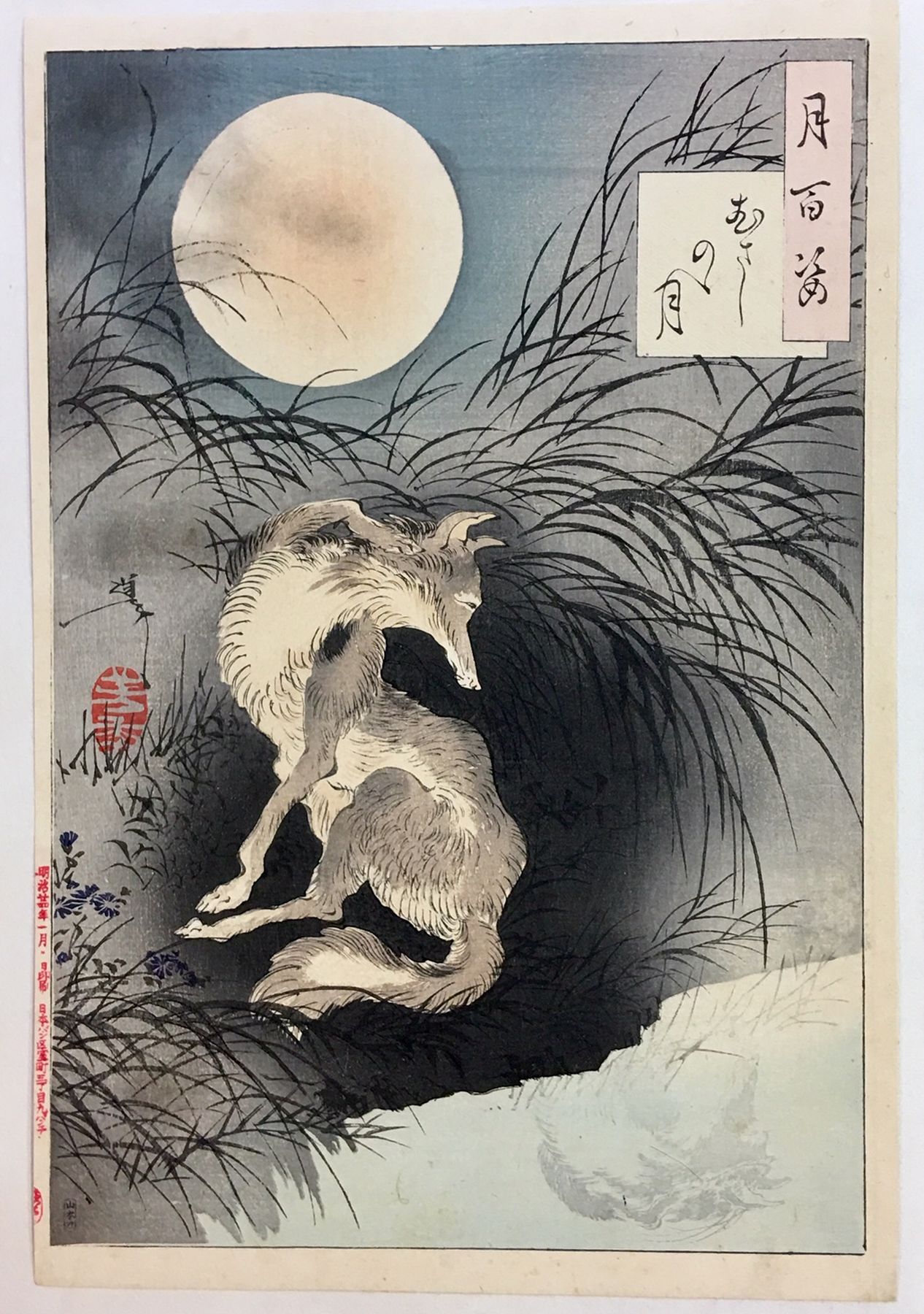 Yoshitoshi lived a difficult life, but as someone who had inherited Kuniyoshi’s Edoite temperament, he managed to cope with these circumstances. Even when he went through difficult times due to his illness, he always thought of his disciples. Sometimes he would take them to the theater and other times they would be absorbed in miniature gardens, which were very popular at the time. His delight in telling scary stories to his foster daughter Kin reveals he also had a mischievous side. The fact that Yoshitoshi managed to draw so many masterpieces while fighting his illness makes him a praiseworthy artist.

Another disciple of Kuniyoshi who also competed with Yoshitoshi was Ochiai Yoshiiku (1833-1904). Yoshiiku debuted in a collaborative series with Yoshitoshi titled Twenty-eight Famous Murders with Verse. After this, he also introduced prints in which he adopted the recently imported technology of photography into ukiyo-e. One such work was published in the Tokyo Illustrated Newspaper of 1875. He also did portraits of businessmen, which was rare for artists at the time. 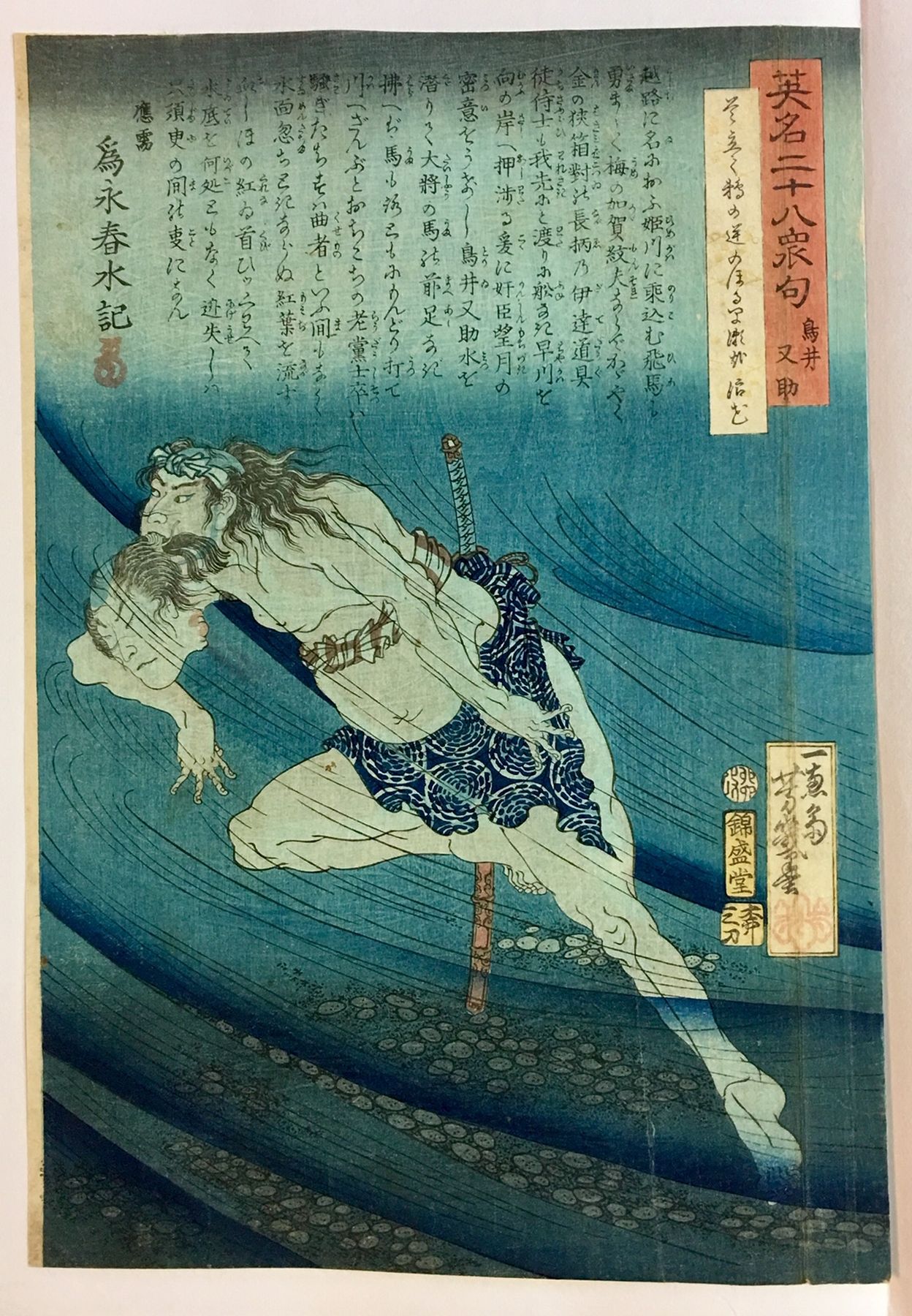 It is generally thought that Yoshiiku died of despair. Nonetheless, Yoshiiku did paint a masterpiece in his final years. There is also a written notice that Yoshiiku acted as the organizer of an exhibition of Kuniyoshi’s disciples, commemorating the 40th anniversary of Kuniyoshi’s death. It is important to stress these facts to restore his reputation as an accomplished artist.

A Visit to the Atelier | Kuniyoshi’s Beautiful Women