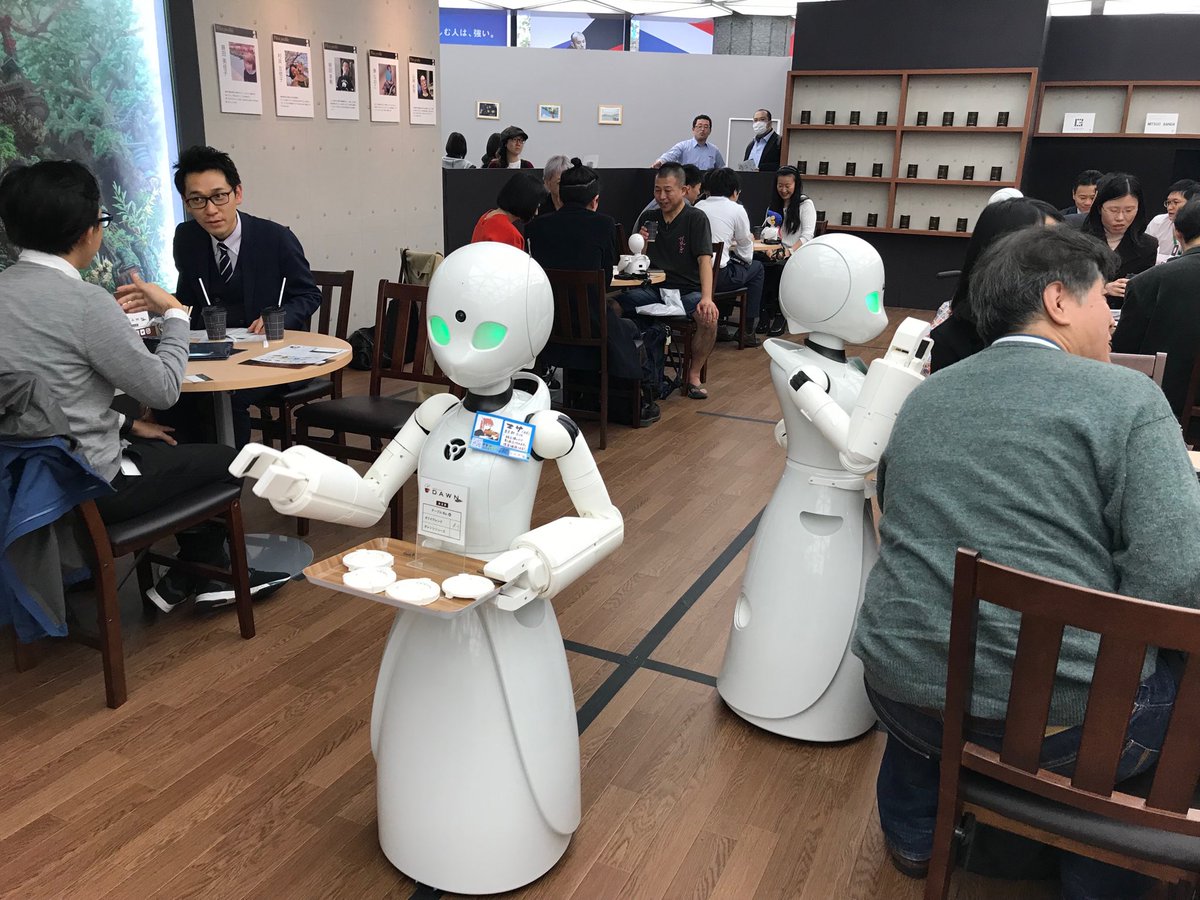 OriHime interacts with kids in the cafe 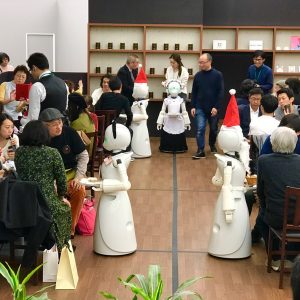 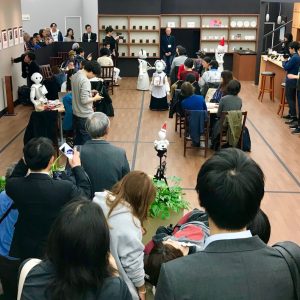 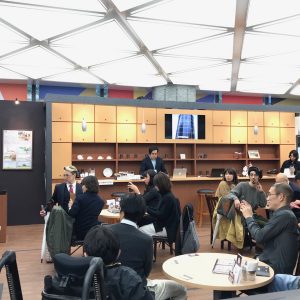 Recently there has been much debate on the pros and cons of accepting a large number of foreign workers to accommodate growing labor shortages attributed to Japan’s low birth rates and aging of society.

In a September 5, 2018, SEIRON column, I noted that there is a potential workforce of nearly 16 million Japanese, including the disabled and hikikomori (socially withdrawn youths), who have found it difficult to work, even as the Abe administration seeks to realize the “Dynamic Engagement of All Citizens.” Ensuring these diverse people have job opportunities in Japanese society is a key task that should be promptly addressed.

The government plans to accept 340,000 foreign workers over the next five years to help fill an estimated 1.3 million to 1.35 million jobs in 14 government-designated industrial sectors, including nursing care and construction. The overall shortage of manpower could reach as many as 6 million by 2025, according to many estimates.

However, there are also many Japanese who have experienced difficulty with employment. Coming from a many walks of life, they include those with narcotics and stimulant drug use records, cancer patients, and single-mother households. The conventional wisdom behind their employment issues is that these are “individuals who require the support of society” and therefore their path to gainful participation has been closed.

In November 2018 the Nippon Foundation, a Tokyo-based private nonprofit organization, launched “Project WORK! DIVERSITY.” The project aims to break down barriers and open minds on this issue. It includes the participation of a wide range of people knowledgeable about the matter, such as scholars and a former administrative vice minister of the Health, Labor and Welfare Ministry.

Envisaged as a five-year project, it will address the issue by creating a web of networks and supporting groups linking 20 areas throughout the country, including Tokyo’s Shibuya Ward and such cities as Sapporo and Osaka. The plan is to make better use of the 8,000 or so job assistance centers and extend a helping hand to people with employment difficulties, matching them with well-thought-out job opportunities across the country.

Atsushi Seike, former president of Keio University and chair of the foundation’s project, explained: “The current shortage of human resources and rapidly aging society have produced a golden opportunity for people who have had difficulty entering the workforce and finding jobs suited to their needs.”

We want to put into force as many pilot projects as possible over the coming five years’ time. The goal is to enable five million to six million of the 16 million who have had difficulty entering the workforce to work an average of around 20 hours a week, excepting those with heavy disabilities or who are unable to work because of complex mental or physical difficulties and serious sickness. We also plan to come out with proposals for the government to boost job opportunities for those in need of such assistance.

Of course, it is not a simple task. However, even in Category B employment assistance programs — programs facilitating career opportunities for those with comparatively heavy disabilities — efforts to increase wages by threefold have in fact resulted in about a 300% increase in job placement in some manufacturing fields. Previously, wages in these jobs were only around ¥15,000 JPY (about $133 USD) per month.

In some cases, this has enabled the disabled to live independently without government relief benefits. Raising living standards for the disabled should never be seen as an impossibility.

In connection with the project, a booth simulating a cafe featuring an avatar robot was set up in late November 2018 at the Nippon Foundation headquarters in Akasaka.

Named “OriHime,” the legendary princess likened to the star of Vega — the goddess of superb weaving — the avatar robot was jointly developed by the Nippon Foundation and Ory Laboratory Co. Ltd. in Tokyo’s Minto Ward. Measuring 120 centimeters in height, the robot is equipped with a camera, microphone, and speaker. It is able to move backward and forward as well as swivel, in addition to operating its own arms and the neck. It can be remote-controlled via internet-connected devices, thus serving exactly as “another self” for people with physical impediments.

In an experiment with the robot, people bedridden from ALS (amyotrophic lateral sclerosis) and spinal cord injuries were able to “serve guests” at the cafe and even carry drinks to them by using the robot’s telecontrol functions from their homes in such remote regions as Gifu Prefecture and Hokkaido. Miniature OriHime models, originally designed as 22-centimeter-tall miniature robots, have been put into practice for remote-education in Tokyo and Shimane Prefecture, playing a role in providing education for children with intractable diseases and truant students.

Use of the robot will certainly spread in the future as improvements progress, helping not only with the physically disabled but also empowering people to engage in such activities as manufacturing, clerical tasks, and conferences while at home.

In addition, they will assist in child-rearing and nursing care routines, plus help people who cannot get somewhere because of hospitalization or other reasons. The avatar robot will also be greatly beneficial to elderly people whose physical strength is declining.

Drawing Attention from Around the World

The number of those aged 65 to 74 who cannot find jobs despite their willingness to work has run up to about 3.2 million, according to estimates of the Ministry of Internal Affairs and Communications and others.

Increased use of avatar robots will allow these older citizens and others to contribute significantly to society on the strength of their accumulated in-depth knowledge and experience. ANA Holdings Co. (All Nippon Airways), one of the participants in the Nippon Foundation’s project, for example, plans to establish a permanent avatar robot cafe in 2020 to mark the Tokyo Olympic and Paralympic Games.

Given the surge in expectations, about 100 seats were prepared for the cafe to handle the throng of visitors during the foundation’s 10-day event last November. Many figures in the world of politics and government were there, including the officials of the Ministry of Health and Welfare.

Seiko Noda, a member of the lower house of Japan’s parliament, former Minister of Internal Affairs and Communications — and the mother of a disabled child — visited the cafe on its opening day. Stressing her hopes for the future of OriHime, Noda said, “As the parent of a disabled child, I am anxious about what may lie ahead for my son after I pass away. I would be very pleased to see him able to become independent with the help of OriHime.”

It is imperative that we tackle the problems of labor shortages using a wide range of efforts, such as accepting foreign workers, increasing the employment of women, extending age limits, and utilizing robots. Wider use of avatar robots, for instance, can go a long way toward boosting employment of the disabled, who thus far have had difficulties securing suitable jobs.

It is within our reach to realize a well-balanced society, transforming one currently focused on the healthy and robust into one that is rich and diverse. It is worth noting that the rest of the world is watching Japan to see what can be achieved at the front edge of a graying population, and how.

Success of the “Dynamic Engagement of All Citizens” initiative, along with resolution of issues related to the nation’s social security budget, which snowballed to ¥33 trillion JPY (about $294 billion USD) in fiscal 2018, depends on our willingness to undertake such labor and workstyle reforms.

(Click here to read the article in Japanese as originally published in the “Seiron” column of The Sankei Shimbun on December 12, 2018.)