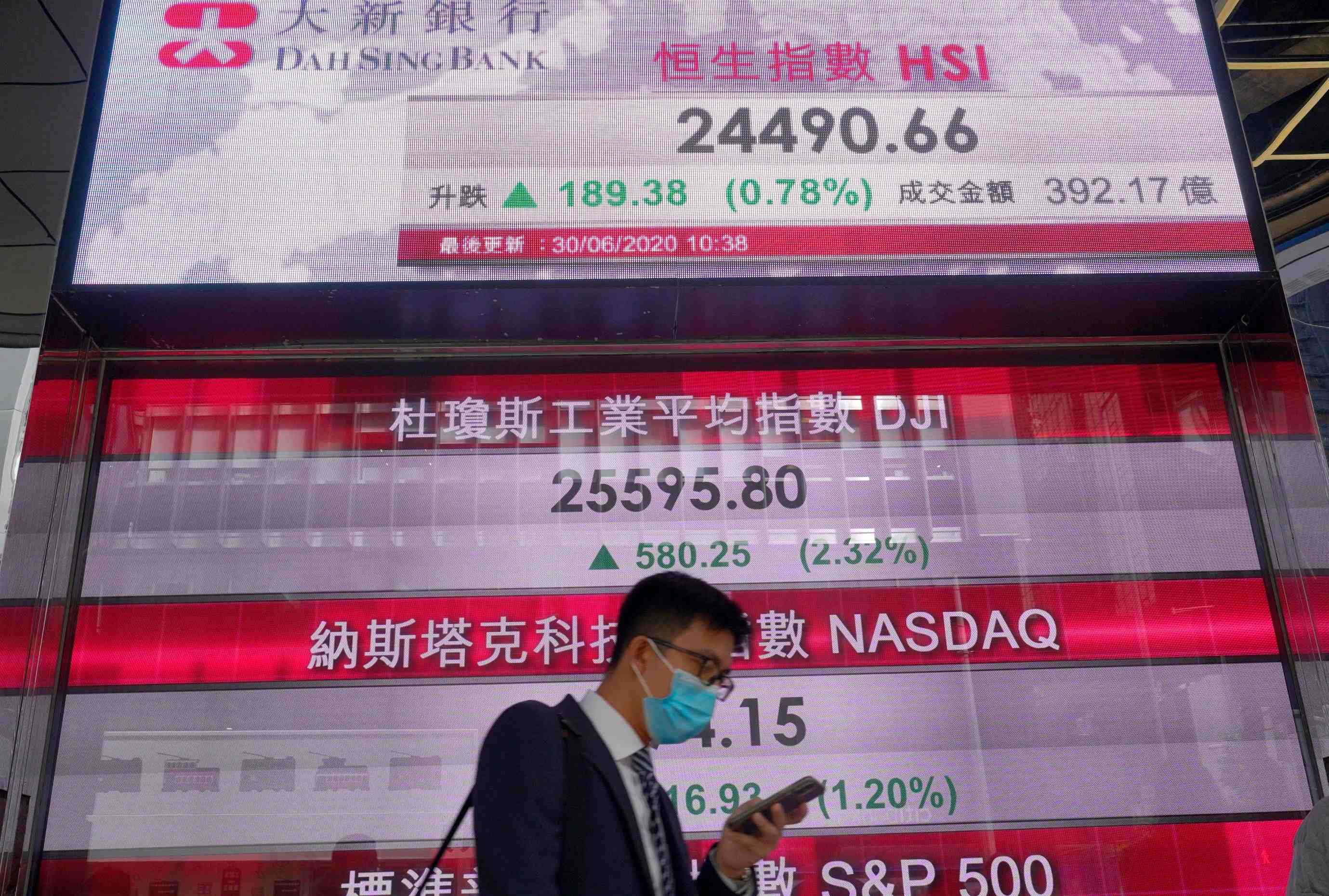 During his speech on July 23, U.S. Secretary of State Mike Pompeo remarked that the United States’ clash with China was one of “freedom vs. totalitarianism.”

The conflict is reminiscent of the U.S.-Soviet Cold War, but the former Soviet Union was powerless when it came to international finance. China, however, has the global financial center of Hong Kong.

The currencies of both the former Soviet Union and China are dependent on the U.S. dollar. Unless they overcome this critical weakness, they will lose to the United States.

Oil and natural gas exports provide the underpinnings for the former Soviet Union’s national income. Energy prices are denominated in dollars and influenced by the monetary policy of the United States. In the late 1970s, after the second oil crisis, the U.S. administration of President Ronald Reagan, plagued by recession and inflation, caused the price of oil to plummet with its high interest rate policy. Russia’s communist government was unwilling to adopt General Secretary Mikhael Gorbachev’s proposals for economic liberalization, which led to the fall of the Berlin Wall in 1989 and the dissolution of the Soviet Union in 1991.

As for China, the Communist Party incorporated the market economy system, joined the World Trade Organization (WTO) in 2001, and then turned itself into the “factory of the world.”

After the Lehman Brothers collapse in September 2008, China’s economy, bolstered by abundant foreign exchange reserves and an aggressive fiscal and monetary policy, was the first in the world to return to the double-digit growth trajectory. The United States was spellbound by the expansion of the Chinese market during the administrations of President George W. Bush and President Barack Obama. As a consequence, Washington was at the mercy of China’s growing trade surplus with the U.S.

China’s growing surplus supported not only its own economy, but also made possible its rapid military expansion and initiatives, such as the Xi Jinping administration’s “One Belt, One Road,” extension of its economic zone, and territorial grabs, including island building and occupation of the Spratly Islands (called Nansha by China).

The administration of President Donald Trump scrapped the appeasement policies of previous administrations and began to limit Beijing’s dollar supply by launching a trade war against China. Meanwhile, the Xi regime took control of the global financial hub of Hong Kong, with the latter’s accumulated dollar assets as Beijing’s base for resisting the U.S. In the end, Hong Kong has become the last stronghold for the dollar-starved Xi administration. 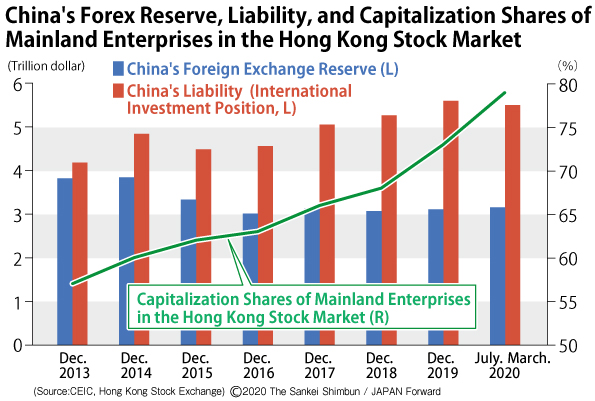 Forex reserves, which are primarily held in U.S. dollars, are the underlying assets for issuance of RMB funds by the People’s Bank of China. However, the PBC has barely maintained a U.S. $3 trillion standard reserve level since 2015.

While the trade surplus with the U.S., which has been the main source of the Forex reserves, is being significantly reduced, external debts are reaching their limit, and massive capital flight through Hong Kong continues unabated.

Hong Kong accounts for more than 70% of international transactions in RMB and serves as a hub for the flow of capital into and out of China.

The Xi administration is most likely trying to kill two birds with one stone by blocking the route of capital flight and suppressing the Hong Kong democracy movement. The common Western view may be that the new security law forced on Hong Kong by the Xi administration at the end of June will bring an end to Hong Kong as we have known it. However, the regime carefully orchestrates its behavior, and the Hong Kong market, which holds Western capital assets, is claiming it will be more lucrative than ever. 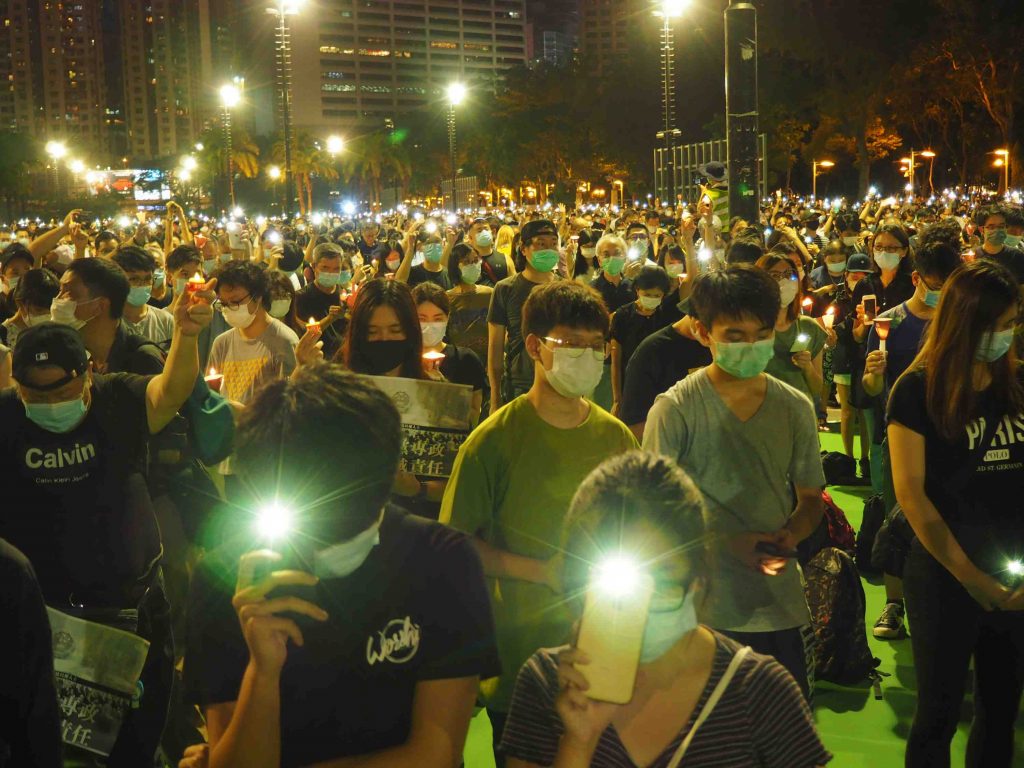 According to a July 24 article in The Wall Street Journal, the Xi government began preparing the national security law last summer when democracy demonstrations were flaring up in Hong Kong. In parallel with preparations for the enactment of the security law, Beijing had initiated the “Chinaization” of Hong Kong’s stock market.

“Wealth management connect” is a unique system between the Hong Kong, Shanghai, and Shenzhen stock exchanges that allows investors to trade securities in each other’s markets in Chinese yuan. Stock prices have soared in the Chinese market since July. The catch line is that Hong Kong’s market is full of attractive new listings from China where high growth is expected.

A representative of the Hong Kong-based franchise of HSBC, a leading U.K. financial institution, has expressed support for the national security law. And U.S. Wall Street giants such as Morgan Stanley are keen to begin underwriting new Chinese company listings and trading Chinese stocks.

In July, Washington passed the Hong Kong Autonomy Act and is poised to impose financial sanctions on government officials and financial institutions found to be complicit in suppressing Hong Kong’s high degree of autonomy, civil rights, and freedom of speech. Last fall, along with passing the Hong Kong Human Rights and Democracy Act, the “U.S.-Hong Kong Policy Act of 1992” was amended to prohibit trade in U.S. dollars through sanctions on banks and other entities that do business with persons who violate the Sino-British Joint Declaration establishing Hong Kong’s “one country, two systems” rule.

Beijing must be under the impression that, as long as it can attract the major U.S. and U.K. financial giants, the key players of the international financial world, the United States sanctions will be of only modest effect.

One cannot ignore, however, the possibility that Washington could retaliate by heightening financial sanctions further. We will need to keep our eyes on Hong Kong, the key battleground in the new Cold War between the U.S. and China.

Author: Hideo Tamura, member of The Sankei Shimbun editorial board