[Mythbusters] Naomi Osaka Doesn’t Need to ‘Give Up’ U.S. Citizenship to Play for Japan 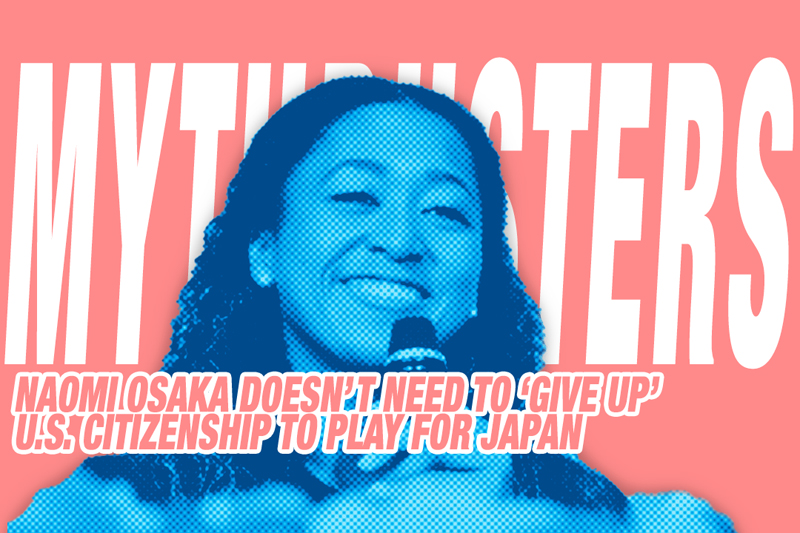 Many general interest and sports media are reporting that tennis star Naomi Osaka, a citizen of both the United States and Japan, has elected to retain Japanese citizenship and is giving up her American citizenship in order to represent Japan in the 2020 Tokyo Olympics.

For example, CNN headlined, “Naomi Osaka to choose Japan nationality for Tokyo Olympics.”  The BBC headline was, “Naomi Osaka: World number three to give up U.S. citizenship to represent Japan at Olympics.”

Such headlines are misleading. She does not need to give up U.S. citizenship to represent Japan. Olympic rules specifically allow athletes with dual citizenship to elect which country they will represent. This Olympic policy is given a full page in Japanese translation on the Japanese Olympic Committee website.

In researching this subject, I found no indication that Japan does not follow Olympic policy in practice. Olympians who switch sides are not particularly unusual.

The reason Osaka is acting now is because Japanese law requires that individuals with dual citizenship by birth who wish to retain Japanese citizenship make an effort to relinquish their second citizenship by their 22nd birthday, which is October 16, 2019, in her case.

Japan does not formally recognize or condone multiple citizenship. But in practice it does allow people to have a second citizenship. Not all countries allow native-born citizens to relinquish their citizenship. This is recognized by the Japanese government and does not cause issues for those who cannot relinquish.

The official site describing the procedure for selecting nationality essentially pleads with dual citizens to make a choice. “If you are a person of dual nationality, please make the choice of your nationality!” it says in prominent boldface type.

There have been cases where Japanese have had their Japanese citizenship revoked for taking a second citizenship. Indeed, several such cases are moving through the courts now. But all such cases that I have found seem to have had an aggravating factor unrelated to holding dual citizenship.

Dual Citizenship and Renouncing One from the American View

The real issue for Naomi Osaka will be on the U.S. side. It was relatively unusual for Americans to give up their citizenship until 2010, when the U.S. Congress passed, and then-president Barack Obama signed legislation commonly called FATCA (Foreign Account Tax Compliance Act).

This required foreign banks and some other financial entities to report to the U.S. government on the accounts of U.S. citizens and “green card” holders, or face severe penalties on any business they did in the U.S.

This had two immediate effects. One, it led some foreign banks to cancel the accounts of U.S. citizens and “green card” holders, and to refuse to accept accounts from such individuals. Two, it led to a surge in U.S. citizens relinquishing or renouncing U.S. citizenship.

The process is convoluted and time consuming, and many U.S. embassies and consulates now have a long waiting time for the processing of applications to relinquish or renounce U.S. citizenship. Two trips to an embassy are required, and in the case of the Tokyo embassy, appointments are available only on Tuesdays and Thursdays after 2 P.M. This means that only a handful of cases are processed each week.

You cannot book the two required appointments at the same time, meaning that there will be weeks, or more typically months, between them. And because the U.S. embassy honors both Japanese and U.S. holidays, the days available for booking appointments are further reduced. At the first meeting, an effort will be made to dissuade you from giving up your citizenship.

What the U.S. Authorities are Really After

In addition, the application requires payment of a fee of $2,350 USD to cover “administrative costs,” although the administrative burden exists because the U.S. itself makes the process so cumbersome.

More important in Osaka’s case is the need to satisfy U.S. authorities that she is not relinquishing U.S. citizenship to avoid U.S. taxes, and that she has paid all taxes the U.S. government thinks she should have paid.

The U.S. is one of only three countries that taxes citizens and permanent residents (“green card holders”) on their worldwide income. Further, even if you live abroad, have no U.S. income and would have no U.S. tax liability, you are still legally obligated to file yearly tax returns. Preparing these returns yourself is very time consuming if you do it yourself and very expensive if you have them prepared by a tax specialist.

High-income earners who attempt to relinquish U.S. citizenship may be subject to an exit tax, something the U.S. condemned when the Soviet Union imposed such a tax. Further, it has been reported that in some cases the U.S. will stay on your case for as long as 10 years after you have given up your U.S. citizenship.

Osaka presumably has tax specialists and legal advisors who can sort things out for her while she concentrates on tennis. But for most people, relinquishing U.S. citizenship is an onerous, time-consuming, and expensive process.

None of the many articles I read in English dealt with the process Osaka will presumably need to follow, unless the embassy treats her as a special case.  Reading foreign press articles, one could easily get the impression that, for Osaka, selecting Japanese citizenship is a matter of ticking a few boxes on a form. Far from it.

Although Osaka has stated that she is electing to retain Japanese citizenship in order to represent Japan in the 2020 Olympics, some Japanese have noted other possible motives.

First, Japanese citizenship is more advantageous in terms of taxation. Japan is like most countries — it does not try to tax your foreign earnings if you are not resident in Japan.

As a naturalized Japanese who originally held U.S. birthright citizenship, I naturally applaud anyone who selects Japanese citizenship in preference to U.S. citizenship.

I wish Naomi Osaka all the best as a Japanese citizen representing Japan in the Tokyo Olympics, and at tennis tournaments at large. I am proud of my adopted country, and I expect that Naomi Osaka will make us proud of her.