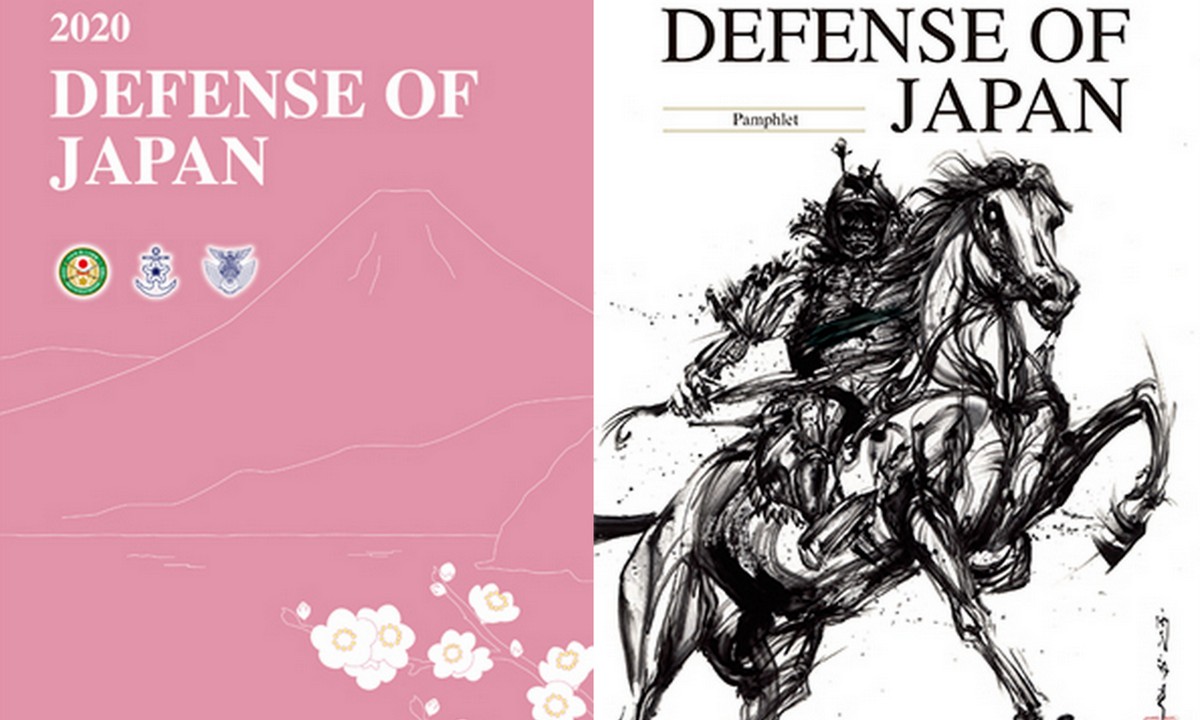 Covers designs of the "Defense of Japan" whitepapers for 2020 (left) and 2021 (right). Source: Japanese Ministry of Defense.

Japan’s Ministry of Defense (MoD) annual white paper ”Defense of Japan 2021,” released on July 13, addresses a range of security subjects concerning Japan, the challenges to its strategic environment, and its defense strategy and preparedness.

Approved by the Japanese Cabinet, the 2021 white paper’s most distinct transition comes in terms of the cover page design and imagery. This year’s cover page depicts a galloping samurai warrior on horseback, purportedly exhibiting a resolute and bolder defense policy line.

Designed by a young sumi-e artist, Yu-ki Nishimoto, the bold cover stands out as a sharp contrast to previous covers, namely, the 2020 white paper that exhibited sakura cherry blossoms with Mt. Fuji as their backdrop. The earlier versions, in 2019 and 2018, were descriptive of security subjects such as space, multi-domain warfare, and cyber-related themes.

The White Paper in Context

A major point of interest is how the ever-critical Taiwan issue has been addressed this year by Japan’s MoD, marking an astonishing departure on many counts from previous years.

The MoD’s annual report shows an increase of 0.5% in its defense budget, now to ¥5.34 trillion JPY (about $48.6 billion USD). It mentions China’s “intensified military activities around Taiwan,” including the incursion of Chinese aircraft in the nation’s southwestern airspace amid a growing military imbalance. In relation to this, it discusses the U.S. support for Taiwan through warship transits and increased arms sales.

Mentioning that the balance is “tilting to China’s favor,” the white paper recommends that consideration needs to be drawn from the improvements of Chinese forces. It raises the status of Taiwan’s own forces from a perspective of Taiwan’s development of its own indigenous military.

“Stabilizing the situation surrounding Taiwan is important for Japan’s security and the stability of the international community…. Therefore, it is necessary that we pay close attention to the situation with a sense of crisis more than ever before,” the paper advocates.

Compare this to 2020, when Tokyo only went as far as describing changes in the military balance around Taiwan, and the potential impact of any Taiwan-related contingency on Japan’s southwestern islands becomes apparent. It is fast evolving to become a core concern for Japan. In reference, there are clear indications in this year’s defense white paper that, for Japan, the defense of democratic Taiwan from communist China is a geostrategic objective Japan shares.

The 2021 white paper is an amalgamation of multiple, concurrent themes, including Japan’s reformulated defense policy, national security strategy, new defense law, and the 2019 defense guidelines. The recent past has been witness to Tokyo being rather forthcoming in expressing forthright opinion on the Taiwan question, including the joint statement with the U.S. in Washington, D.C., in April and at the G7 summit in Cornwall in June.

Besides, in what could be interpreted as Tokyo ending its long-held “one-China” policy, the map in the 2021 white paper no longer shows Taiwan as part of China. Instead, Japan has taken Taiwan off China’s map, and discusses the subject as part of the larger U.S.-China relationship.

Kishi is well-known to have long backed a policy that reflects affinity and support for Taiwan. In this choice lies the signal of his approach towards Japan’s overall China policy.

Kishi’s focus on Taiwan came into the spotlight when, in 2015, as a member of a lawmaker group aimed at bolstering Japan’s relations with Taiwan, he played host to present Taiwanese President Tsai Ing-Wen, who was then serving as the leader of Taiwan’s opposition party. Tsai was on a visit to Yamaguchi Prefecture, the home turf of former Prime Minister Shinzo Abe.

Kishi’s role in shaping Tokyo-Taipei ties has been vital ever since.

In a sense, Kishi is carrying forward the legacy of his elder brother, Abe, on expected lines. Earlier, when he was parliamentary senior vice minister of foreign affairs in August 2014, Kishi notably had reviewed the progress on realigning U.S. forces in Japan — and Japan-U.S. ties overall, including force posturing and capabilities — during his discussions with then-U.S. Deputy Secretary of Defense Bob Work. In what was Work’s first official visit to the Asia-Pacific region, including Hawaii, Guam, Japan and South Korea, Kishi and Work discussed underlying efforts to modernize the Japan-U.S. alliance.

Their goal was to ensure that the deterrence provided by the alliance in East Asia does not get undermined in any manner and remains a cornerstone of peace and stability in the Indo-Pacific. At the same time, the alliance must continue to serve as a crucial pivot in the U.S.’ rebalance to the region.

The geo-strategic and military maneuvers undertaken by China in the past few years in its endless pursuit of revising the existential territorial status quo in Asia have disturbed the pre-existing status and are a blatant attempt to shift the regional power balance.

The “2021 Defense of Japan” report is one among many manifestations of an international pushback against China, with the common aim of strengthening the strategic environment across the Indo-Pacific.

Japan’s latest shift in defense policy posturing appears part of the overall defense and foreign-policy posture transitions adopted in 2021 by leading democracies holding stakes in Asia. It will also serve as a determinative push for smaller nations to develop capability-based forces to ensure their own survival — and the survival of a weaker democracy, namely their neighbor Taiwan, that depends on the former’s support, as it struggles to survive under the consistent threat of a siege by China.