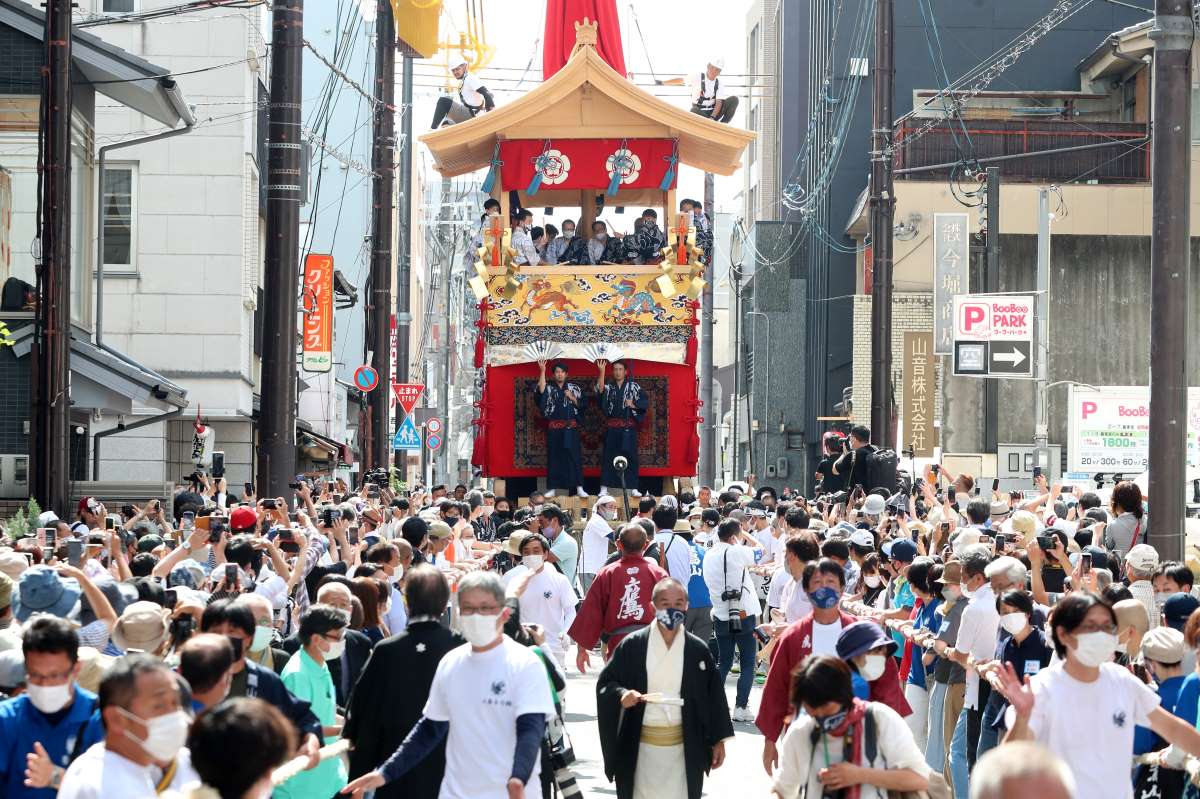 Hikizome, pulling of the Taka Yama float at the 2022 Gion Matsuri was enjoyed by a crowd of onlookers and participants. (July 20, 2022. © Sankei by Yukia Watanabe.

Eighth in a series

The Gion Matsuri is a 1,150-year-old phenomenon. There is nothing quite like it anywhere else. Today’s festival is a multilayered and intricate collection of religious rites and cultural traditions, with the sacred and the secular, the pure and the profane all taking a bow.

As Catherine Pawasarat aptly puts it in her excellent book The Gion Festival: Exploring Its Mysteries (2020), the Gion Festival is “one of the oldest and most complex urban festivals in the world.”

Although as noted earlier in this series, the Gion Matsuri is at heart a plea for protection from disease from a once feared god, it is also a joyful celebration of the moment and affirmation of community identity and civic pride. The essence of the festival has been preserved from its earliest days when it began as a goryo-e held in the Shinsen-en imperial garden. Yet, over time, it evolved from an event orchestrated by the aristocracy to a primarily merchant-townsmen affair.

I should note that the secular half of the festival (to distinguish it from the rituals associated directly with Yasaka Shrine) is subdivided into the Saki Matsuri (“Earlier Festival”), July 10-17, and the Ato Matsuri (“Later Festival), July 18-24.

The largest procession of floats takes place on July 17, when the community greets the mikoshi carrying the kami for a one-week stay at the otabisho, which is located the south side of Kyoto’s Shijo Dori between Teramachi Dori and Kawaramachi Dori. A smaller version follows on July 24 as a send-off when the gods return to the shrine.

In 2009 UNESCO listed these yamaboko (also called yamahoko) float processions as an Intangible Cultural Heritage of Humanity event. For nearly five decades, starting in 1966, the Saki Matsuri and Ato Matsuri parades of floats were consolidated due to traffic concerns, but were restored to their original separate form in 2014. The parades were back in 2022 after being canceled for two years due to COVID-19, and the Saki Matsuri was broadcast live on television by NHK.

Since Yasaka Shrine was in fact located outside the center of the city in premodern times, the two parades of floats do not go there. Instead, the kami come to visit the people.

During the Shinkosai procession on the evening of July 17, the three mikoshi carrying the principal kami of Yasaka Shrine travel to the otabisho, where they remain on display for one week, before heading back to the shrine in the Kankosai procession.

The purpose of the enormously popular Yamaboko Junko parade of floats on the morning of July 17th is more than anything else purification of the neighborhood before the arrival of the kami. It also is meant to greet and entertain the gods. But since the parade takes place before they even arrive, obviously they are not there to view it while it is going on.

In fact, the Gion Matsuri can be characterized as an elaborate exercise in ritual purification. Such purification of the Nakagoza mikoshi (representing all three mikoshi) itself takes place during the mikoshi-arai shiki on the night of July 10.

Nowadays, a Shinto priest purifies this mikoshi at Shijo Bridge by sprinkling it with holy water from branches of the sacred sakaki evergreen (Eurya ochnacea), also known as Japanese cleyera, that have been dipped in the Kamo River.

Guidebooks frequently allude to the ritual ablution (misogi) of the shrine mikoshi, but it is hardly a full dunking. The mikoshi-arai purification is repeated on the evening of July 28 as the month-long festival is drawing to a close.


Visitors from the Realm of Deities

In a sense the kami of Yasaka Shrine are treated like marebito visitors from the divine realm who come to visit human society and bring joy at a set time each year. Accordingly, the two parades are respectively intended to welcome and bid farewell to the Yasaka Shrine deities. The Chinese characters in the Shinkosai literally mean “kami-happiness (or good fortune)-festival”

That term is applied not just to the Gion Festival, but also to other festivals where the kami are taken by mikoshi to the area where their devotees live for a temporary stay.

Floats Paving the Way for the Gods

Although the Onin War is often cited as the critical turning point in the development of the Gion Matsuri, change was already well under way before that.

It is not clear when the Yamaboko Junko tradition began. One theory has it that it developed from festivities accompanying an imperial enthronement ritual held in the year 999. But it most likely appeared in the 14th century, during the late Kamakura period, or the Namboku period that followed. It might have started as a parade of hoko halberds. Recall how 66 hoko played a prominent role during the goryo-e held at the Shinsen-en in 869.

According to one record there were 58 yama and hoko in the Gion Matsuri prior to the Onin War. When the festival was revived in 1500 after a 33-year gap, there were 36 floats—not much different from the count today. Nowadays, these floats can weigh over twelve tons, but even in former days they were big—very big. According to one surviving record, an “old nun” met her fate crushed under a super-large hoko float.

Today, a total of 34 yamaboko (or yamahoko) appear in the two parades; 23 in the Saki Matsuri and 11 in the Ato Matsuri. Both parades follow the same route, although they go in opposite directions.

The floats are constructed anew every year. According to tradition, not a single nail is used, although bolts and frames are employed to a certain extent to ensure stability. But mostly these huge structures, some of which carry dozens of people aboard, are held together by an enormous amount of rope tied with ingenious knots of various kinds.

There is no hard and fast distinction between the yama and hoko, though in general the yama tend to be smaller and often sport large parasols, while the hoko can be multistoried with roofs eight meters above ground, and often have a large central pole or shingi (“god tree”) meant to represent the original halberds. Some of these tower up to 25 meters into the sky.

Incidentally, Pawasarat’s book provides an excellent overview of the festival, its traditions and importance to the local community. Especially valuable are her detailed descriptions of all the yama and hoko floats that take part in the processions and the treasures they carry, including rare brocades and imported tapestries from regions as far afield as Belgium and Persia. Each has a theme, with many of the stories taken from Japanese or Chinese history and mythology.

Read the book and you’ll understand why the yama and hoko are frequently referred to as “moving museums” and the festival itself is truly an international festival. Her website www.gionfestival.org also contains a cornucopia of useful information about the festival.

Winning Over the Gods of Pestilence

After the parades are finished, the yama and hoko are almost immediately dismantled and stored. Pawasarat compares the process of how everything comes together almost overnight to the creation of a giant mandala, painstakingly assembled and then quickly dismantled.

Why are they not left on display for tourists? That is to disperse the accumulated pollution from the ekijin. In any event, the original intent was not to present a gorgeous display for the benefit of the public, but to entertain and win over the ekijin (gods of pestilence). In other words, the dancing, music and displays all had a spiritual purpose. Any attempt to wow spectators was strictly secondary.

From ancient times hoko were considered yorishiro into which kami descended. Think of the Yamaboko Junko as a giant, serpentine magnet circulating through the festival zone drawing ekijin spirits of disease into the yama and hoko. Or think of the tall poles and other towering protrusions on the hoko as lightning rods to catch these invisible threats. That is why the floats must be dismantled immediately after the parades.

Originally, they appear to have been burned, dumped into the Kamo River or otherwise disposed of. This harkens back to the earliest days of the goryo-e rites in which various objects, including dolls, hei (Shinto cut paper streamers), boats or other vessels which served as yorishiro into which the ekijin were drawn were following purification rites set adrift to carry the pollution of disease off. (The connection of water with goryo-e festivals is very strong.)

Next: Part 9: The Gion Matsuri: Communities of Faith and Pride in a Tourism Mecca