The Gion Matsuri: 1,100 Years of Tradition and Change 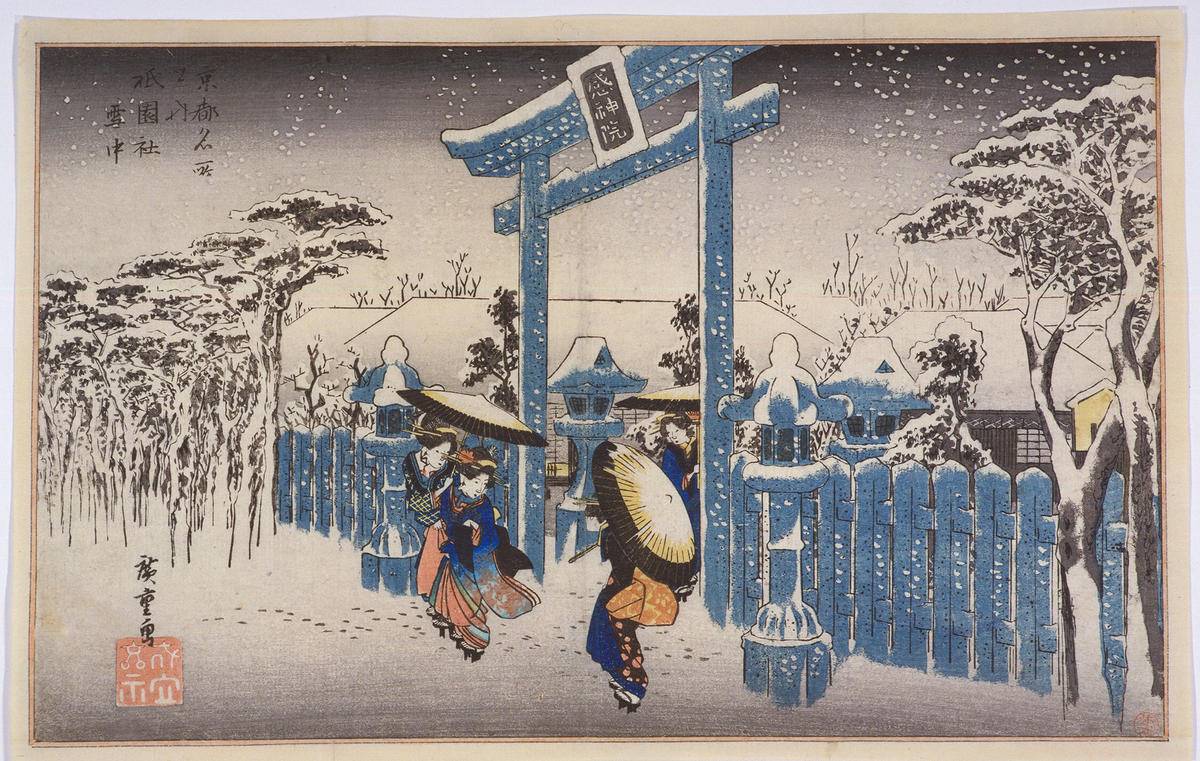 The Gion Shrine in Snow, Woodblock print by Utagawa Hiroshige from his Famous Places in Kyoto series. (Bing open-source)

First in a series.

Kyoto is without a doubt a city that loves its festivals.

Japan’s ancient capital has many such celebrations spread throughout the calendar year. But the big three are the Aoi Matsuri in May, the Jidai Matsuri (Festival of the Ages) in October and the Gion Matsuri in July.

The Gion Matsuri is in fact probably the most famous Japanese festival of all. It is certainly one of the oldest, having been staged annually (with a few interruptions and adjustments) for well over a millennium. In fact, there are few instances anywhere in the world of a popular festival surviving so long.

In this first of five articles on various aspects of the festival, I provide a bit of historical background to this unique event.

Reflections on Impermanence and Good Health

This mid-summer spectacle was born from fear, nourished by hope, and today is an expression of unbridled joy. But at heart it remains an opportunity for memento mori reflection on the impermanence of life and a dramatic expression of the universal yearning for good health.

Due to the COVID-19 pandemic, 2022 will be the first time in three years that the festival will be celebrated. And it couldn’t be timelier, as the seemingly interminable virus continues to circulate around the world.

The first thing to understand about the Gion Matsuri is that it is really two festivals in one: the month-long series of religious rites at the Yasaka Shrine and the boisterous communal celebration held on the other side of the Kamo River, which includes processions of gorgeous yama and hoko floats and public display of art treasures of all kinds. These two are in a sense separate but intertwined and complementary.

The second point to emphasize is that the Gion Matsuri has undergone important changes through the centuries, both in how the festival deities are viewed and how they are honored.

The Gion Matsuri is centered on the Yasaka Shrine, known affectionately to Kyotoites as Gion-san. Prior to 1867 what is now the Yasaka Shrine was in fact a temple-shrine complex, or miyadera, known as the Gionsha or Gion Kanjinin, among other names. Such syncretic places of worship that included both Buddhist and Shinto elements were pretty much the norm from the ninth century until the Meiji Restoration.

When still the Gionsha, the shrine was under the joint control of the Enryakuji Temple on Mt. Hiei and the Hiyoshi Taisha Shrine, and lay monks or other representatives of the Enryakuji were in charge.

It is unclear when the Gionsha was founded, with possible founding dates varying from 656 to the late ninth century. Most historians agree that it was originally established as a Buddhist temple by immigrants from the Korean Peninsula.

Both the Gionsha and the nearby Gion entertainment district, which is famed for its geiko (the word used to refer to geisha in Kyoto), derived their names from Gion Shoja, which is the Japanese term for the Jetavana grove and monastery in India. Gautama Buddha is said to have taught and meditated with his disciples and cared for the poor and hungry in this idyllic retreat that had been given to him by a wealthy patron.

Today the principal object of worship at Yasaka Shrine is the deity Susanoo-no-Mikoto, the rebellious younger brother of the sun goddess Amaterasu Omikami. However, prior to its conversion into a pure Shinto establishment, it had been the enigmatic ox-headed deity Gozu Tenno. Later parts of this series will take an in-depth look at the elusive origins of Gozu Tenno.

A Special Kind of Festival

Although the Gion Matsuri is frequently referred to as a “Shinto festival” or matsuri, that is something of a misnomer. At the very least, it should be considered a very special kind of matsuri. You see, in historical terms it is more appropriate to speak of the Gion Goryo-e or Gion-e rather than the Gion Matsuri.

What is a goryo-e? That takes a bit of explaining.

The Nara Period (710-794) is well known for the many beneficial material and spiritual imports from the T’ang empire and the Korean peninsula that the Japanese embraced. The ritsuryo administrative system and Buddhist religion Japan adopted at that time proved especially important politically and culturally.

But the greater intercourse with the Asian continent also resulted in wave after wave of infectious diseases lashing Japan’s shores; with smallpox proving especially devastating. In fact, it is estimated that between 735 and 738 alone an especially virulent epidemic of smallpox killed roughly one out of every three Japanese alive at that time!

No wonder the Yakushi Nyorai or Buddha of Medicine and Healing was such a popular object of worship during the Nara era. And indeed this buddha became an object of veneration at the Gionsha during the following Heian period.

It took centuries for the Japanese to develop natural resistance to these diseases introduced from abroad, and there was of course no understanding back then of the scientific causes of disease and the critical importance of hygiene. Needless to say, antibiotics were not available either.

Not surprisingly then, the Japanese became obsessed with the threat supposedly posed by pestilence-producing gods (ekijin). This built on the ancient belief that evil spirits or oni (demons) were responsible for diseases.

Spells and talismans were looked to for protection from such dark forces. Ceremonies, often including song and dance, were also sometimes carried out to transfer the dangerous disease spirit to an object such as a straw doll or a vessel which was then sent adrift on a river. Thus, early on a connection was made between water and disease.

Fear of epidemics, along with a desire to escape the all-pervasive influence of the large Buddhist establishments in Nara were among the reasons why Emperor Kammu transferred his capital to Heiankyo, now Kyoto, in 794. As a matter of fact, he had moved the capital to nearby Nagaokakyo in 784, but a major political incident had caused that short-lived capital to be abandoned before construction there had even been completed.

Although this was long before the rise of the samurai and rule by the sword, political intrigue at the highest levels in early Japan was as vicious as anywhere else and there were many mysterious deaths, often by poison, sometimes even allegedly due to a hex being placed on the victim.

The official Kammu had put in charge of the construction of Nagaokakyo was assassinated and a Nara-based plot was discovered which “implicated” Crown Prince Sawara. At least that was the contention of the emperor and his close associates.

Prince Sawara vehemently denied any involvement in the plot and went on a hunger strike. But he was sent into exile nonetheless. He conveniently died on the way in the year 785. Perhaps by suicide, or because he was given an assist to enter the netherworld.

Raising the Profile of a New Capital

What does all this have to do with the Gion Matsuri? Well, you see, almost immediately after the unlucky prince’s demise, the new capital was struck by a series of disasters, including fires and accidents.

Many people close to the emperor, including officials who had been among Prince Sawara’s prime accusers, began dropping like flies due to disease. The multiple disasters were attributed to the onryo or vengeful spirit of the ill-fated prince.

Although Kammu died in 806, the calamities seemed to snowball, with smallpox, dysentery and other epidemics sweeping over the land. Meanwhile, unusual weather led to failed harvests, famine and social unrest.

As if that were not enough, Fujisan erupted in 864 and a major earthquake struck in 869, followed by a tsunami.

Amidst all this carnage, Emperor Seiwa decided that something needed to be done urgently. A large goryo-e ceremony for the pacification of the vengeful spirits of Prince Sawara (who was even named emperor posthumously) and five other individuals who had died untimely deaths due to political reasons was held at the Shinsen-en in 863.

This pleasure garden adjacent to the Imperial Palace contained a lake in which a dragon goddess was said to dwell. In addition to being the site of boating and poetry parties, rainmaking ceremonies were also held here on several occasions.

It did not take long before divination experts reached the conclusion that onryo thirsting for revenge were in fact the cause of major epidemics and if they could be won over then perhaps they would stop causing people to become ill and die. Thus, the purpose of the goryo-e subtly shifted.

Mollifying the Anger of an Ousted Prince

The rationale behind goryo-e became the belief that by mollifying the anger of a vengeful specter, he could be transformed into a protector. Consider it a kind of ancient “conversion therapy.”

For a goryo-e held at the Shinsen-en in 869, sixty-six hoko halberd-spears, each meant to represent one of the ancient kuni (provinces), were erected on one side of the garden.

As noted earlier, rites rooted in folk religion had long been carried out in which, through the application of sympathetic magic, disease and pollution were transferred to an object that was then set float on water, hopefully to be washed to the sea. The hoko may have been meant to function as objects into which the disease-bearing spirits would enter instead of aiming for human bodies.

For this event at the Shinsen-en, Gozu Tenno and two other kami were transported from Gionsha to the garden in omikoshi.

That was followed by the first regular goryo-e held at Gionsha, which by one account took place in 970. It soon became an annual event there during the height of the “summer sickness” season.

At first, goryo-e were upper class ceremonies, with those staged at the Shinsen-en by the imperial court being primarily Buddhist in nature. They included the reading of sutras, singing, dancing and theater performances, sumo matches, horse racing, and even displays of mounted archery.

These rites were often open to the general public, and were the forerunner of the Gion Goryo-e, which in turn became the Gion Matsuri.

Next: The Gion Matsuri: Appeasing the Gods of Pestilence and Plagues