The Gion Matsuri: Appeasing the Gods of Pestilence and Plagues 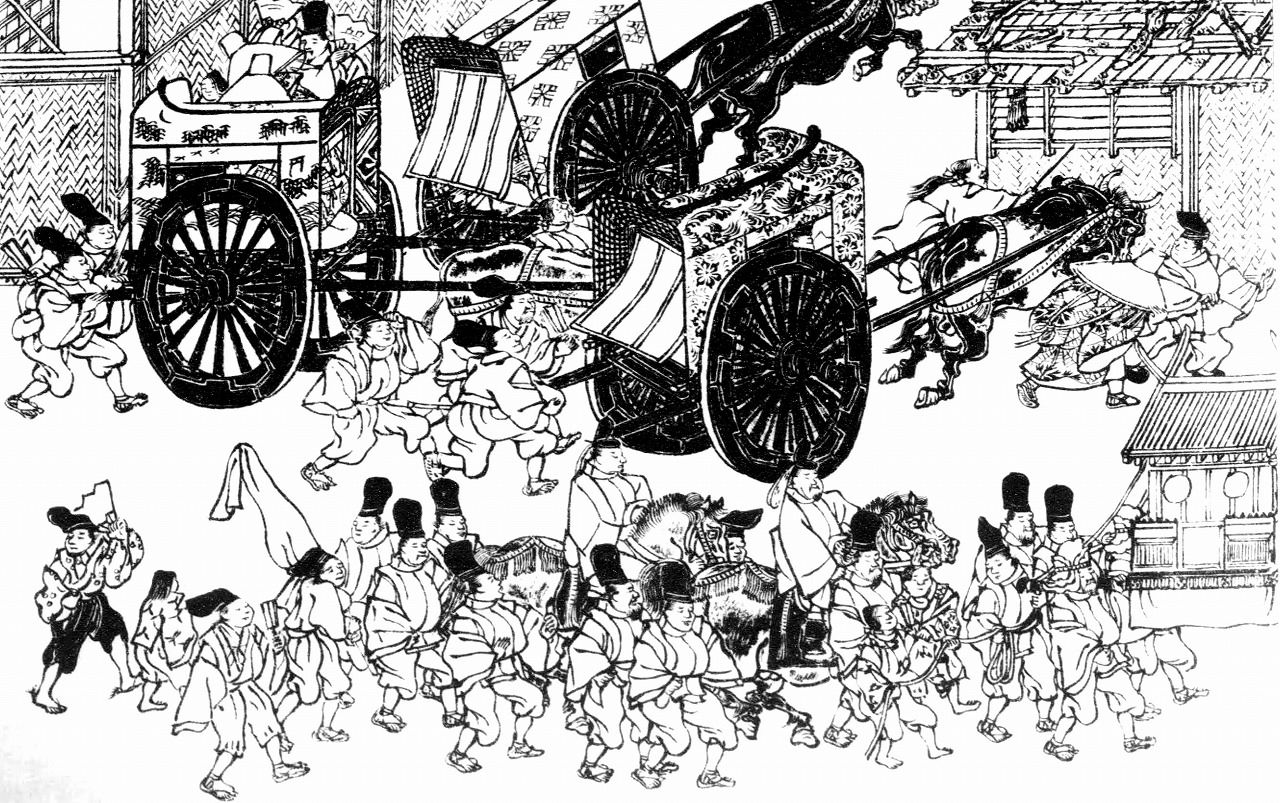 Shrine functionaries carrying one of the three mikoshi portable shrines. The scenes of the Gion Festival are taken from the Nenchu Gyoji Emaki which was created in the Late Heian period.

Second in a series.

These disease-oriented goryo-e were originally held at several locations throughout the area around Heiankyo, often near areas where the bodies of the dead were buried or discarded. But eventually they became state-orchestrated events concentrated at the Gionsha.

The Gionsha itself was located near the huge Toribeno burial district. During the long Heian Period (794-1185) many poets and aristocrat diarists were to write of the smoke that constantly rose from the funeral pyres in this bleak location, an area which people normally avoided.

Over time, goryo-e came to be viewed as instruments of healing and not just expressions of fear. They began to be held regularly at Toribeno and elsewhere. As with earlier such rituals they tended to be staged at highway junctions, on the side of a body of water, or other locations regarded as meeting places between this world and the next.


Annual Appearance of Festivals and Plagues

That the Gion Goryo-e should become an annual event during summer was hardly surprising since epidemics have ravaged the inhabitants of Kyoto on a regular basis during that oppressively humid season up to modern times.

Although Japan is now renowned for its excellent standards of hygiene, in the early days that was far from the case. Refuse was thrown into the streets as well the waterways crisscrossing the city, including the all-important Kamo River. And the “refuse” included many dead animals and human corpses as well as excrement.

Things could become especially nasty after heavy rains and flooding. One mitigating factor, however, was the Japanese penchant for regular bathing.

During the Heian and Kamakura periods, the Gion Goryo-e remained an officially-sponsored event, often attended by imperial family members and aristocrats, although with individuals of all classes participating. Parades and entertainments of all kinds were held to keep the fearsome ekijin Gozu Tenno amused and his wrath under control.

Dengaku dancing derived from rice-planting celebrations came to be one of the preferred strategies for doing so.

In the late 11th century Kyoto had experienced a craze for dengaku performances which morphed into parades of people dressed in colorful costumes who sang and danced to loud music in the street.

Crowds of Kyoto residents of all classes, as well as peasants from the surrounding countryside gathered to ogle the strange spectacle, which represented the fusion of urban and rural entertainment forms.

These goryo-e festivities sometimes got out of hand, as the jostling of the huge crowds and sweltering weather of Kyoto in July could combine to spark street fighting resulting in injury or even death. Chalk it up to the excess of overheated animal spirits among festival participants.

Mikoshi even got banged up or abandoned on occasion. Considering how precarious their lives were, it was perhaps not surprising that Heiankyo residents from the lower classes should be filled with anxiety and seek release. After all, many of the city’s residents were originally from the countryside and had become untethered once they had lost their traditional social ties.

The important thing was that the festival took root, eventually to become a permanent feature of life in Kyoto and an integral part of the city’s cultural heritage up to modern times.

The festival’s permanent place in Kyoto life was not an inevitable outcome. The decade-long Onin War (1467-77) nearly ended the Gion Goryo-e once and for all.

This nihilistic bloodbath arose out of a succession dispute within the Muromachi shogunate, which was based in Kyoto. The essentially absurd power struggle ushered in the Sengoku Period (1467-1615) which eventually culminated in Japan being reunited by a trio of warlords: Oda Nobunaga, Toyotomi Hideyoshi and Tokugawa Ieyasu.

About the only thing the Onin War “accomplished” was the utter destruction of the city of Kyoto, with nearly all its major buildings being obliterated during the conflict. It is commonly said that when residents of Kyoto refer to the “last war,” they are referring to the Onin War.

Moreover, no Gion Goryo-e was held for thirty-three years. The belligerents had reduced the Gionsha to ashes during the very first year of the conflict. Adding to the mayhem during this period of chronic unrest, adherents of various competing religious sects sometimes battled each other in the streets of Kyoto.

Meanwhile, a confederacy of local samurai and peasants took control of Yamashiro, the province that surrounded the capital, from 1485 to 1493.

Things would never be the same again following the Onin War. The Gion Goryo-e was resumed in 1500, although it took several years before it was again staged on an annual basis.

After its revival, the timing of the festival was not set in stone either, being staged at various times of the year. Sometimes it was delayed; sometimes called off completely.

Things were definitely out of whack in those unsettled times. Historical records show that a Gion Goryo-e was held during the winter on several occasions. In 1532 snow was even falling as the mikoshi were paraded through the streets of Kyoto.

Although we may be inclined to envisage life in ancient Kyoto as it was portrayed in The Tale of Genji or The Pillow Book of Sei Shonagon, it should not be forgotten that for many centuries Heiankyo (Kyoto) was the largest and in fact the only real city in Japan. The vast majority of its population were artisans, merchants and others catering to the needs of the aristocrats.

The common people now made the Gion Festival their own.

After order—of a sort—was finally restored, the Muromachi Shogunate remained generally supportive of the festival. Nobunaga and Hideyoshi, however, apparently were not very much interested in it.

In fact, when Hideyoshi built a giant wall called the Odoi, encompassing central Kyoto, he blocked passage of the mikoshi procession from Gionsha along the traditional route of Shijo Dori. The mikoshi togyo procession of portable shrines therefore had to detour around to either the Sanjo Bridge or Gojo Bridge instead.

According to some records, there was a preference for carrying the mikoshi to the west bank of the Kamo River over “floating bridges” (ukihashi) built by having boats line up and then laying planks on top of them. This was apparently because of fears of ritual pollution if the kami were made to cross a bridge that had been defiled by traffic and animal dung.

The figure of the brash, devil-may-care Edokko (early Tokyoite) is well known, but Kyoto also developed a rambunctious lower class called Kyo waranabe among other names. Brawling during street celebrations was far from unheard of both before and after the Onin conflict.

The wealthier and more sophisticated townsmen, known as machi-shu or cho-shu developed strong community ties within self-governing units known as cho. They had their own neighborhood kami and outsiders could not freely join these tight neighborhood groups.

This class of townsmen provided the impetus for the economic recovery following the Onin War and the revival of the Gion Goryo-e and other traditions that had fallen into abeyance during that anarchic period.

Kyoto remained one of Japan’s major cities even after Osaka and Edo developed into huge urban areas and Japan no longer remained Kyoto-centric. During the Edo period, although Kyoto had lost its status as the political center of the country after the Tokugawa shoguns settled in Edo, in the year 1700 it still boasted a population of around 500,000—roughly the same as Edo.

The current popular-oriented style of the Gion Matsuri dates from 1500 in the wake of the Onin War. Epidemics had not disappeared, but the fear of ever-present death had slackened with the end of the fighting and resistance to disease had built up over the centuries.

As Kyoto became more prosperous, the Gion Goryo-e processions and entertainment became more elaborate. Wealthy merchants, especially those dealing in lumber, textiles or kimono, together with prosperous craftsmen living in the most densely populated part of Kyoto took the lead, while coordinating with major temples, aristocrats and other elites.

The Hoko and Yama Floats

These machi-shu financed the hoko and yama floats that have become the most distinctive part of the Gion Matsuri. They also hired the pullers and specialists needed to maneuver the floats which could weigh several tons through the streets.

Each cho became responsible for its own float, and there was (and still is) a keen sense of rivalry among them. Over time these floats became symbols of conspicuous consumption.

Here I would note that as the name suggests the hoko floats had developed from the hoko halberds that had been an important part of the Gion Goryo-e from the beginning. Later they were sometimes mounted on carts and pulled through the streets. Voila! You now had a primitive hoko float.

The furyu aesthetic of gaudy exhibitionism that came to the fore as the processions became larger seemed the opposite of the Zen emphasis on simplicity and the natural. But it exerted immense influence, affecting various performing arts including sarugaku and kabuki.

After furyu dancing became part of the festival, the streets took on a carnival atmosphere, as townsfolk dressed up in disguises or outlandish costumes, while near-naked young rowdies pranced about in super-high geta (wooden clogs). The sense of excitement and release was infectious and provided ready opportunities for licentious behavior.

Fearing that they would get out of hand, on several occasions the authorities tried to tamp down the festivities, but invariably with little success.

Celebrating the Spirits of the Ancestors

The furyu dances were often connected to the Bon dances held in mid-summer, when singing and dancing were used to entertain the spirits of dead ancestors during their annual visit to the world of the living. In a sense, these festivities provided a connection between the city dwellers and the countryside from which they often originally hailed.

Now as in the past, on days before and during the festival, the very air in the festival district seems alive with the repetitive kon kon chikichin, konchikichin sounds in what can be described as a wall of sound. No one seems to be quite sure how this music originated, although there is speculation that the Noh drama might have influenced it. But since the Noh only became popular during the 15th century, that leaves me wondering what kind of music was played during the matsuri before that.

The Gion Matsuri was postponed more than once during the Meiji era due to epidemics. It was canceled during World War II from 1943 until the middle of the Occupation. COVID-19 also took a toll in 2020 and 2021, with the Gion Festival events scaled down or closed to the public.

But the Gion Matsuri is back in 2022 and promises to carry on the tradition of street partying, with the two Yamahoko Junko parades set to take place as usual.

Next: The Gion Matsuri: The Mysteries of Gozu Tenno