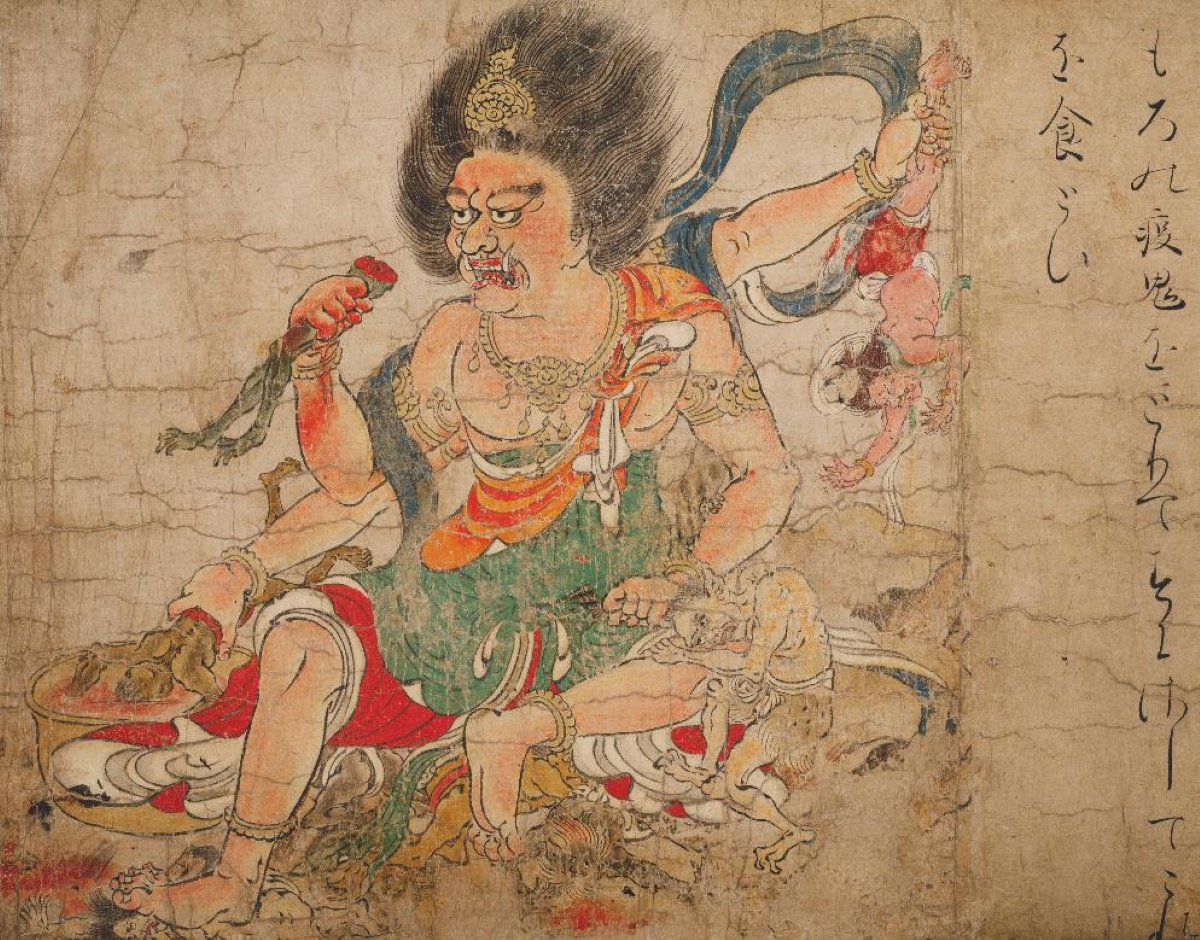 Fourth in a series

At the core of the Gozu Tenno cult and an integral part of the Gion Matsuri is the legend of Somin Shorai. There are several versions of the story, which differ in important respects. But the basic story goes something like this:

Gozu Tenno was born into a royal house in the Kingdom of the Northern Sea near the sacred mountain Sumeru. Although after assuming the throne he proved an excellent ruler, Gozu Tenno had the misfortune of having a ghastly bull’s head with red horns one meter long that gave him the appearance of a ferocious monster and seriously dimmed his marriage prospects.

However, one day he received the good news that the third daughter of the South Seas Dragon King was willing to marry him. He immediately set off in the guise of an old man to claim his bride-to-be.

Night was fast approaching when Gozu Tenno entered a small town. He sought shelter at the home of the wealthiest resident named Gotan Shorai, who owned several dwellings and storehouses.

Far from showing the weary traveler hospitality, Gotan Shorai turned Gozu Tenno away in such a nasty, demeaning fashion that the ox-head king wanted to exact revenge on the spot. But concerned that that might ruin his auspicious journey, Gozu Tenno with great effort managed to restrain himself.

Next, he went on to the home of Somin Shorai, Gotan Shorai’s impoverished older brother. Not only did Somin Shorai and his family greet the traveler warmly, they shared with Gozu Tenno their meager dinner of kurimeshi (millet mixed with chestnuts).

Before leaving the next morning, the visitor told Somin Shorai that if he wrote down in gold letters on red paper the phrase, Somin Shorai no shison nari, meaning “Descendants of Somin Shorai Live Here” his family and their descendants would be protected from epidemics. They did so and survived when an epidemic swept the town, wiping out Gotan Shorai and all his family.

The tale reminds me of the story in the Bible of the avenging angels of death sent to kill the first-born of the Egyptians but spare the Israelites who had marked their doors.

Many Kyotoites to this day still paste such charms outside their doors, proclaiming that they are descendants of Somin Shorai. The wording used can vary slightly.

Gozu Tenno also told Somin Shorai that wrapping wreaths made of miscanthus reeds around their waists would protect him and his family members. To this day, thatch and straw are used to ward off disease.

That is the reason for the chimaki straw talismans sold during the Gion Festival. People hang them outside the doors of their homes to ward off disease.

That is also why large hoops of miscanthus reeds are erected at many Shinto shrines in early summer through which people walk while repeating a seasonal waka poem and then the name of Somin Shorai twice. This constitutes the Nagashi no Oharae Summer Purification Ritual carried out at many shrines at the end of June.

Note that these chimaki are not related to the edible glutinous rice cakes wrapped in bamboo leaves that are eaten on Boy’s Day, although the same Chinese character is used for both.

Incidentally, according to an Onmyodo source, a hashitame (literally “a woman of low birth”), perhaps a shamaness, brought an ofuda made of peach wood (said to ward off evil spirits) to Somin Shorai’s family inscribed with the magical expression kyu kyu nyo ritsu ryo, a Japanese rendering of a well-known Taoist spell that originally dates to the Han Dynasty.

This then is a capsule version of the story.

Most versions describe how after several years spent enjoying life at the Palace of the Dragon King of the Southern Seas, during which time he marries the princess and their eight sons are born, Gozu Tenno at last returns to the town to exact his revenge.

By one account, a fortune teller warns the greedy brother that the angry god is coming for him within the next three days. Gotan Shorai attempts to frustrate the vengeful god’s plan for revenge by having one thousand Buddhist priests chant the Heart Sutra in order to create an impenetrable spiritual defensive barrier.

Unfortunately, one of the priests fumbles and fails to read one of the characters in the sutra (in another version he falls asleep), giving Gozu Tenno the opportunity to rush in and stomp Gotan Shorai and all of his family to death. Certainly, it is a form of execution befitting an oxhead god.

The Hoki Naiden, a divination manual that apparently was compiled during the last part of the Kamakura period or in the Nanbokucho period (1334-1392), was a text used by unofficial onmyoji that circulated widely during the Edo period. Its version of the Gozu Tenno story adds that Gozu Tenno was an incarnation on earth of the Tenkeisei (“Divine Punishment Star”).

During the early Kamakura period, Tenkeisei was frequently prayed to for protection from epidemics. In the Onmyodo interpretation, Gozu Tenno’s eight sons were equated with the Hachi Daishogun (“Eight Generals”), and most of these in turn were identified with specific planets. That indicates that the Gozu Tenno myth had an astronomical dimension to it as well.

There was definitely a deep connection between the Gionsha and Onmyodo, and there is even speculation that a priest at the Gionsha actually wrote the Hoki Naiden.

Although apparently different religious traditions in Japan developed different interpretations of the Gozu Tenno theme, the Hoki Naiden was written long after the myth first appeared.

In fact, the Gozu Tenno-Shomin Shorai story clearly predates the Heian period. In fact, we know that with certainty because archaeologists have discovered wooden ofuda in the ruins of Nagaokakyo that read in Japanese “Descendants of Somin Shorai.”

These are in fact the oldest wooden ofuda discovered up to now in Japan. Similar talismans with a Somin Shorai connection have been found throughout Japan.

Next:  The Gion Matsuri: Underworld and Other Tales of Gozu Tenno and Susanoo-no-Mikoto