The Gion Matsuri: The Mysteries of Gozu Tenno 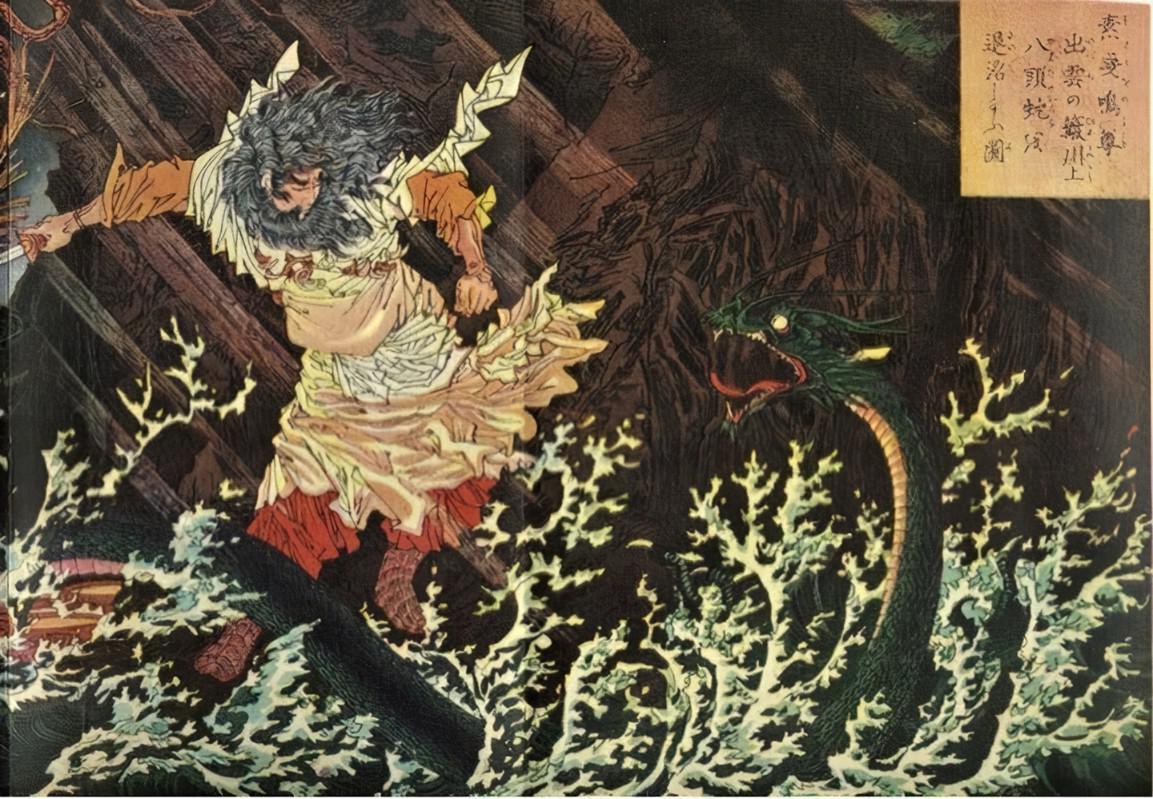 Susanoo-no-Mikoto, one of the kami honored in the Gion Matsuri and chief deity of the Yasaka Shrine, vanquishing the Yamata no Orochi serpent monster. (Image via the author.)

Third in a series

The three kami honored in today’s Gion Festival are Susanoo-no-Mikoto (the chief god honored at Yasaka Shrine), his wife Kushinadahime-no-Mikoto, and their eight children, collectively known as the Yashira-no-Mikogami or Hachioji.

However, prior to the Meiji Restoration, a different trio of deities had been so honored for centuries. They were Gozu Tenno, whose name literally means “Bull-Headed King of Heaven,” his consort Harisaijo, and their eight offspring, the Hachioji (who together count as one unit).

The Yasaka Shrine claims that the two groups of three kami are really one in the same. That is debatable as we shall see.

Impacts and Influences of Buddhism

Almost as soon as Buddhism was introduced into Japan around the sixth century, a process of assimilation with the native kami cults (which came to be collectively referred to as Shinto) began. Eventually, the fusion of the two sets of beliefs advanced to such a degree that it was often difficult to tell the two apart.

Referred to as shinbutsu shugo (an amalgamation of Shinto and Buddhism), or less kindly as shinbutsu kongo (jumbling together Shinto and Buddhism), this syncretism most often took the form of Shinto kami being considered as local manifestations of the universal buddhas, bodhisattvas and other members of the Buddhist pantheon. For example, Amaterasu Omikami, the Sun Goddess and divine ancestor of the imperial line, was sometimes equated with the cosmic Buddha Vairocana (Dainichi Nyorai).

The ideology of the Meiji Restoration involved not only restoring the rule of the emperor but also purifying Japanese culture by getting back to its roots, even when it was not clear what those roots might be.

Soon after taking power in 1868, the Meiji government implemented a strict policy of shinbutsu bunri or “separation of Shinto and Buddhism.” Although moderation ultimately prevailed, for a time fanatics even went about destroying temples and smashing Buddhist statues and other Buddhism-related art works.

This trend directly impacted the Gionsha, where temple buildings were torn down and Buddhist images carted away. For example, the Yakushi Nyorai image kept in a hall next to the main sanctuary was sent to another temple in Kyoto.

In earlier times, there also appear to have been statues of Gozu Tenno and Harisaijo, although what happened to them is unclear.

In the end, the Gionsha was transformed into a pure Shinto establishment—today’s Yasaka Shrine.

So, in effect, what the Yasaka Shrine authorities claimed to be doing was the reverse of the shinbutsu shugo process—substituting the original form of the kami for the foreign import—Gozu Tenno.

Was this just a fabrication designed to hijack the time-honored Gozu Tenno cult with which Susanoo-no-Mikoto had no connection whatsoever?

There are many theories and opinions concerning the origin of Gozu Tenno, but very few hard facts. Research concerning Gozu Tenno, especially prior to the end of World War II, has been surprisingly scanty.

From what we do know, the general opinion seems to be that the Gozu Tenno cult began in India and then made its way via China and perhaps Tibet to the Korean Peninsula, being influenced by Chinese religion along the way.

This deity arrived in Japan in the form of a yakubyo-gami or god who brought sickness. Later he was transformed into a god who would protect against disease if honored properly.

Let’s start with the name of the Gion Shrine itself. As noted in Part 1 of this series, Gion Shoja was the Japanese name for the tranquil Jetavana park in northern India where Gautama Buddha and his immediate disciples often stayed. It seems likely that originally Gozu Tenno was the minor Indian guardian deity Gosirsa-Devaraja who lived above the gate to Jetavana.

Some scholars see a connection with the ancient Vedic supreme deity Indra “a bull among beings.” Or it might have been in China that Gozu Tenno got his ox-head, since the Chinese culture hero Shen Nong (“the Divine Farmer”) is sometimes portrayed with horns. Mention should also be made of the iconic minotaur of Crete, the humanoid with a bull’s head, although that legendary Greek monster probably had no direct influence on the evolution of Gozu Tenno.

Be that as it may, this protector god of Jetavana is mentioned in the Kegon (Avatamsaka) Sutra and several other sutras.

In Japan, Gozu Tenno also was sometimes considered a manifestation of Yakushi Nyorai, although how that came about is not clear. There is also evidence of influence from the Mikkyo or esoteric schools of Buddhism.

In short, there definitely was a Buddhist connection to the Gozu Tenno cult. In fact, the Gionsha in Kyoto became the mother “temple-shrine” for more than a thousand Gionsha throughout Japan. Nearly all of them were converted to pure Shinto shrines with Susanoo-no-Mikoto as the principal object of veneration after the Meiji Restoration. Nevertheless, a few still worship Gozu Tenno, as will be discussed later.

Many scholars believe that the district where Yasaka Shrine is located in Kyoto was first settled by immigrants from the Korean Peninsula. They belonged to the Yasaka clan according to one account.

Yasaka means “Eight Slopes” and there are eight of these in this area, including Kiyomizuzaka. So, it is not clear whether the clan was named after the geography or the other way around.

The Yasaka Shrine’s own website says that an envoy from Korea named “Irishi” brought the spirit of Susanoo-no-Mikoto from Korea. Other sources add that this man came from Oxhead Mountain in the kingdom of Silla.

In any event, try as you might, you won’t find any explanations about Gozu Tenno on the signs within the precincts of Yasaka Shrine. That is despite the fact that in the past it was specifically referred to as the Gozu Tennosha. The intriguing question remains: Why was a Korean official bringing the mitama (spirit) of a Japanese kami to this area?

Other Theories of the Shrine’s Origin

Other sources claim that the shrine was originally located in Harima Province, which is now the southwestern part of Hyogo Prefecture, where it was known as the “Silla Shrine.”

By all indications, when the Gozu Tenno cult first started, Gozu Tenno was a much-feared deity, and it took quite some time before he came to be seen as a savior.

Eventually, Gozu Tenno came to be identified with Tenkeisei, a protector against disease. Nonetheless, according to the accompanying notation, in this Hekijia-e (“Illustration of the extermination of evil”) depiction dating from the late Heian period (ending in 1185) or Kamakura period (1185-1333) he is included among the oni meeting a gruesome fate in the emaki.

I would point out that Tenkeisei is an Onmyodo directional deity said to have control over the movements of the stars. Onmyodo is a quasi-religion that exerted immense influence in premodern Japan, especially during the Heian period.

Originally introduced from China as a motley collection of beliefs and rituals derived from the Yin-Yang and Five Phases (Five Elements) schools mixed with popular Taoist folk religion, after reaching Japan they evolved along independent lines into Onmyodo.

Consisting of a potpourri of directional and seasonal taboos, calendrical lore, astronomical and astrological knowledge, and cryptic fortune telling ceremonies, so important was Onmyodo considered by the Japanese government that a special section was established at the Imperial University within the palace complex to train official onmyoji (practitioners of Onmyodo).

Although some elements of Onmyodo were pseudo-scientific, others were highly occultic in nature, including exorcisms, hexes, sorcery, and even the supposed ability to raise the dead through the secret taizan fukun rite. No wonder the powerholders tried to control Onmyodo for their own protection and seriously frowned on unauthorized onmyoji.

Even to this day, the great influence Onmyodo has had on Japanese religious life and superstitions is woefully understudied. Learn more about the Onmyodo connection with Gozu Tenno in Part 4 of this series.

Next:  The Gion Matsuri: Legend of Somin Shorai