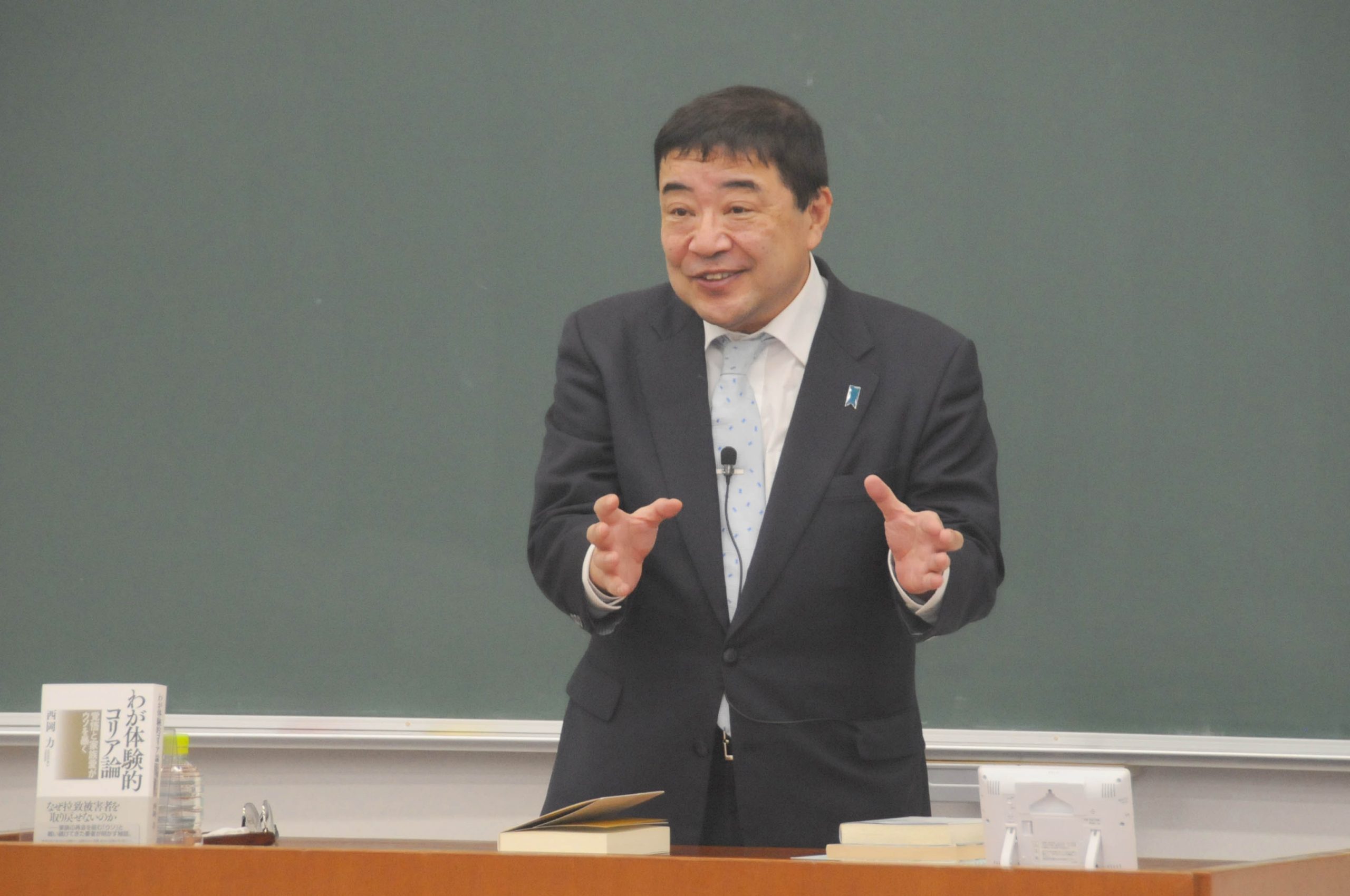 In the middle of December 2021, I stepped inside a small lecture hall in Kashiwa, Chiba Prefecture in Japan to hear Professor Tsutomu Nishioka speak. The day was cold and gray, and the Wuhan coronavirus kept the number of audience members to a bare minimum — although many more were tuning in online.

Nishioka — a renowned scholar of modern Korea and a leader in the decades-long fight to bring home Megumi Yokota and all the other Japanese citizens abducted by North Korea — took the podium. But instead of beginning his speech, he started by making a somber announcement.

“Mr. Iizuka passed away early this morning,” Nishioka said, his face drawn. The MC for the talk then asked the audience to bow their heads and observe a moment of silence.

Shigeo Iizuka, aged 83, had headed the Association of Families of Victims Kidnapped by North Korea (AFVKN) until a few days before his passing. Mr. Iizuka was the adoptive father of Koichiro Iizuka, who he had raised as his own child after his sister, Yaeko Taguchi, Koichiro’s mother, was abducted by North Korean agents in Japan in 1978.

Just before Mr. Iizuka’s passing, he yielded the leadership of the association of families to Takuya Yokota, a younger brother of Megumi, who North Korean agents abducted near her home in Niigata when she was thirteen.

The first leader of the Association of Families of Victims Kidnapped by North Korea was Shigeru Yokota, the father of abductee Megumi Yokota. His wife Sakie and two sons, Megumi’s twin brothers Takuya and Tatsuya, continue the work today.

Nishioka chairs the NARKN, known in Japanese as the “Sukuu-Kai,” or National Association for the Rescue of Japanese Kidnapped by North Korea. He has seen no small measure of success in his attempts to rescue abduction victims from North Korea. Most notably he played an important role in convincing the Japanese government not to send back to North Korea the five victims that North Korea had allowed to visit Japan “temporarily” in 2002.

For much of his career, though, Nishioka has encountered setbacks, not just in rescuing abduction victims but in battling against distorted history about the Korean Peninsula. He has been attacked, sued, harassed, and run out of his former university position, among other difficulties. How does Nishioka keep going?

Yet he delivered his speech that December day, despite the grief and hardships he has faced.

Breaking Through the Lies

In his new book, Nishioka reveals that a strong sense of right and wrong has helped him overcome the obstacles he has encountered.

That strong sense of morality has also guided Japan’s foreign relations onto firmer footing — as well as across troubled waters of conflict.

In addition to his work to bring home the victims of North Korea’s campaign of state-sponsored terrorism abductions, Nishioka is well known for his research into the history and politics of the comfort women issue. His groundbreaking efforts to correct the fake accounts of the comfort women have yielded benefits for both South Korea and Japan, but have also come at a high personal cost.

The professor explains how hasty, insincere apologies regarding the comfort women issue fueled distrust between South Korea and Japan. Former Japanese prime minister Kiichi Miyazawa made these statements during a 1992 visit to South Korea, perpetuating lies about the comfort women that had been published by the Asahi Shimbun newspaper starting the year before.

Nishioka’s argument at the time and still today was that an apology must be based on facts and not used as a tactic of diplomacy. His well-meaning colleagues were concerned for his career and wanted him to refrain from getting involved in the comfort women issue. Against the advice of mentors and peers, the then young scholar of Korean Peninsula affairs decided to pursue the path of truth.

In My Korean Experience (The Moralogy Foundation, 2021), he writes that the moral road is the road of truth, not pandering to narratives.

Throughout the more than thirty years that have followed since the international dispute over the comfort women issue erupted in 1991 in the wake of the Asahi Shimbun’s lies, Nishioka has battled fake news and fake history that has threatened to shatter Japan-South Korea relations. He has been sued several times by Takashi Uemura, the principal author of the Asahi Shimbun’s falsified reporting on the comfort women.

In April of 2021, the Supreme Court of Japan ruled for the second time against Uemura, concluding: “An important part of the articles and claims [of fabrication] […] by Mr. Nishioka was based on the truth.”

Nishioka says, “a sense of resolve and the love of my family” helped “break through the lies.” This sentiment is so strong that he made it the subtitle of his new book: My Korean Experience: Determination and Familial Love Break Through the Lies.

In taking a firm stand against fake history, which has swayed a sizeable portion of the South Korean and Japanese public in the past, Nishioka has often been accused of being anti-Korea, or worse, anti-Korean.

For Nishioka, however, nothing could be further from the truth. He has devoted his life to studying the Korean Peninsula since his time as an exchange student in the Republic of Korea during his university days. His love for Korea and Koreans is evident to anyone listening to him speak or reading his essays or books. “I introduce myself in South Korea as a ‘Korea-lover,’” Nishioka writes.

But it is not love of Korea alone which can help repair the breach in Japan-South Korea relations caused, in part, by hapless Japanese politicians operating under the Asahi Shimbun’s concocted comfort-women reporting. Love for truth, Nishioka writes, has been his real lodestar.

And that commitment to speaking the truth about history has resonated most strongly in South Korea itself. In My Korean Experience, Nishioka writes of Dr. Lee Wooyoun, a South Korean researcher who has been fighting in academia and in the public square to tell the truth about Korean history.

Nishioka also writes of Lee Younghoon, the famed scholar and former Seoul National University economics professor who edited a 2019 runaway bestseller in South Korea titled Anti-Japan Tribalism (Bungeishunju, Japanese edition) That book, along with its sequel, The Fight Against Anti-Japan Tribalism (Bungeishunju, 2020) has been translated into Japanese, greatly easing tensions between the two countries as concerned citizens learn more about the facts of their shared history.

Many of Nishioka’s books have been translated into Korean, building more bridges of truth and understanding.

It would be impossible to accomplish what he has without a deep love for Korea. He writes about his desire for truth about history and his hopes for sincere relations with others based on that truth.

More Difficulties — and Hope — Ahead

In his December 2021 talk, Nishioka recalled some of the key moments from his life spent studying Korea and trying to help rescue the victims of North Korea’s state-sponsored terrorism. His voice is tinged with sadness from time to time, especially when his mind casts back to Mr. Iizuka, who passed away just hours before Nishioka’s speech began.

“The fact that we are now in the third generation of leadership in the fight to bring the victims home,” Nishioka tells me during a private meeting after his speech, “is something to consider seriously. Megumi Yokota’s father, Yaeko Taguchi’s brother, now Megumi’s brother, and Yaeko Taguchi’s son — the longer the fight goes on, the longer the victims have not been returned.”

Megumi Yokota’s widowed mother Sakie is aging and pleads for every effort to be made to seize “what may be our last chance” to bring Megumi and the others home.

Despite these many challenges, Nishioka is hopeful. Settling the abduction crimes is part of his lifework, he says in his December speech. He sees time and again how truth can move even seemingly insoluble problems closer to a solution.

“Now, right now, is the opportune time to rescue the abduction victims,” he writes in My Korean Experience. The sanctions against the North are working, he says. Also, the effort to bring the Japanese victims home found a new ally in former President Donald Trump these past years, adding to the list of successive American presidents who have met personally with the Yokota Family to learn more about North Korea’s crimes.

With faith, writes Nishioka, he and his colleagues will achieve the objective for which they have already sacrificed much. All the abduction victims will be returned, he believes, and Japan and the Korean Peninsula will enter into a relationship based on respect and trust.

Title (translation): My Korean Experience: Determination and Familial Love Break Through the Lies

To learn more: See the publisher’s website and newspaper reviews.

To purchase the book: The book is available through the publisher, at regular bookstores and internet booksellers in Japan.