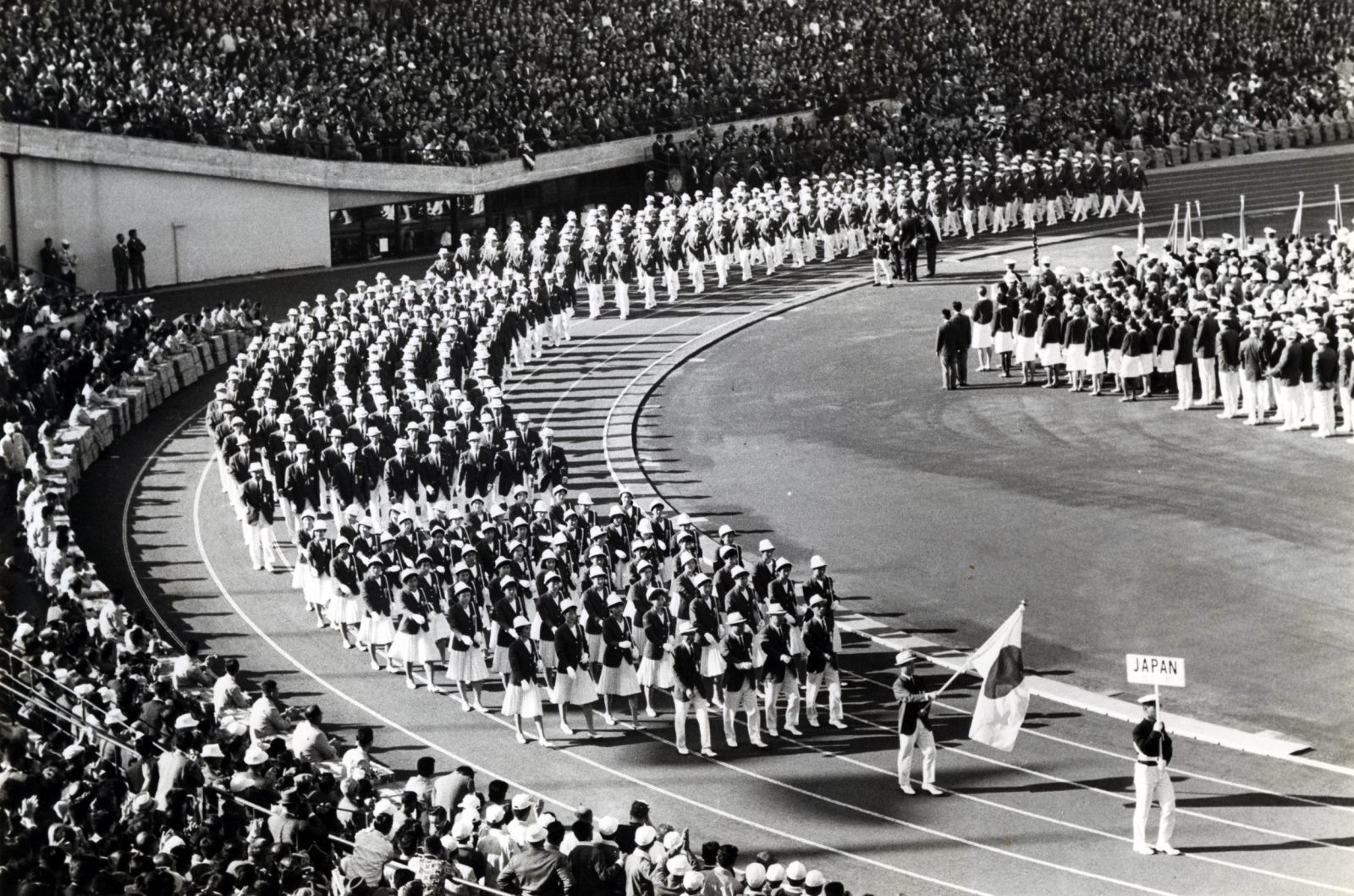 Japans Olympic delegation marches at the Opening Ceremony of the 1964 Tokyo Games.

In 1964, at the time of the first Tokyo Olympics, I was a young Sankei Shimbun journalist at the start of my career. I remember that Olympics, so I would like to compare the 1964 and 2020 Games and share my opinions on this matter.

The 1964 Olympics ran from October 10 to 24, but, from a journalistic perspective, the intensity of that densely-packed fortnight would probably never be seen again.

The 1964 Games saw Japan women’s volleyball team Witches of the Orient win gold, the goddess-like brilliance of the Czechoslovakian gymnast Vera Caslavska, Kokichi Tsuburaya competing against the Ethiopian marathon runner Abebe Bikila, and Akio Kaminaga winning silver in the judo. But that was not all.

On October 15, 1964, less than a week after the start of the 1964 Tokyo Games, the Soviet Union’s First Secretary Nikita Khrushchev suddenly “retired” from his role.

Today, that would be the equivalent of China’s President Xi Jinping being ousted from his position as leader. It was quite a shocking development.

This had an impact on Japan, a country that was sensitive about nuclear weapons for obvious reasons. There was speculation as to why China was so hell-bent on testing nuclear weapons at the same time as the peaceful Tokyo Games — a tournament it had boycotted.

Beijing’s response was to say merely that it wanted to break the monopoly of the nuclear superpowers, self-imposing the condition that there would be “no first use” by China. However, no one could deny that the International Olympic Committee’s recognition of Taiwan’s participation as the Republic of China was a factor.

Today, further thought on China’s nuclear-weapons testing is required. Most Japanese people have regarded such tests as malice, and nothing more. However, people need to realize that such tests are being conducted at the Lop Nur test ground in Xinjiang, where the Uyghur people live.

Approximately 50 Chinese nuclear tests have taken place there, with half of them being above ground. As a result, a large number of Uyghur people have been exposed to radioactive substances — but this has been covered up in China, where there is no press freedom.

However, now we are finally aware of what is happening in Xinjiang — the forced sterilization, the brainwashing, the policies of assimilation.

In the West, they refer to this as genocide and they talk of imposing sanctions on China. However, when you think of the decades of exposure to radiation that the Uyghur people have been subjected to, it is more appropriate to refer to this as extreme genocide, and not just genocide.

Therefore, it is difficult to welcome the Chinese athletes taking part in Tokyo 2020, even if they themselves are not guilty of anything.

These athletes will just look absurd when they compete hard at the Games in the name of national prestige.

However, while Japan cannot really take action at Tokyo 2020, it should team up with other democracies and demand that China stop its oppression. If this does not work, they should boycott the 2022 Winter Olympics in Beijing.

It should definitely be possible to stage the 2022 Winter Games in a different country instead, perhaps a G7 one. The question is whether there is enough will and decision-making.

Having said that, a meaningful boycott of Beijing 2022 could not be achieved without the United States. For example, when the U.S. boycotted the 1980 Moscow Olympics, in protest against the Soviet invasion of Afghanistan in 1979, many other countries including Japan followed.

Personally, I think that China’s human rights violations in Xinjiang, Tibet, and Inner Mongolia, its crackdown in Hong Kong, and intimidation toward Taiwan are not that different from the Soviet invasion of Afghanistan.

Moreover, despite the fact that Tokyo 1964 and Tokyo 2020 are almost 60 years apart, I can’t help thinking that, in both cases, the Uyghur people in Xinjiang have been quietly unhappy about our failure to act.

Find access to this original JAPAN Forward article in Japanese at this link.