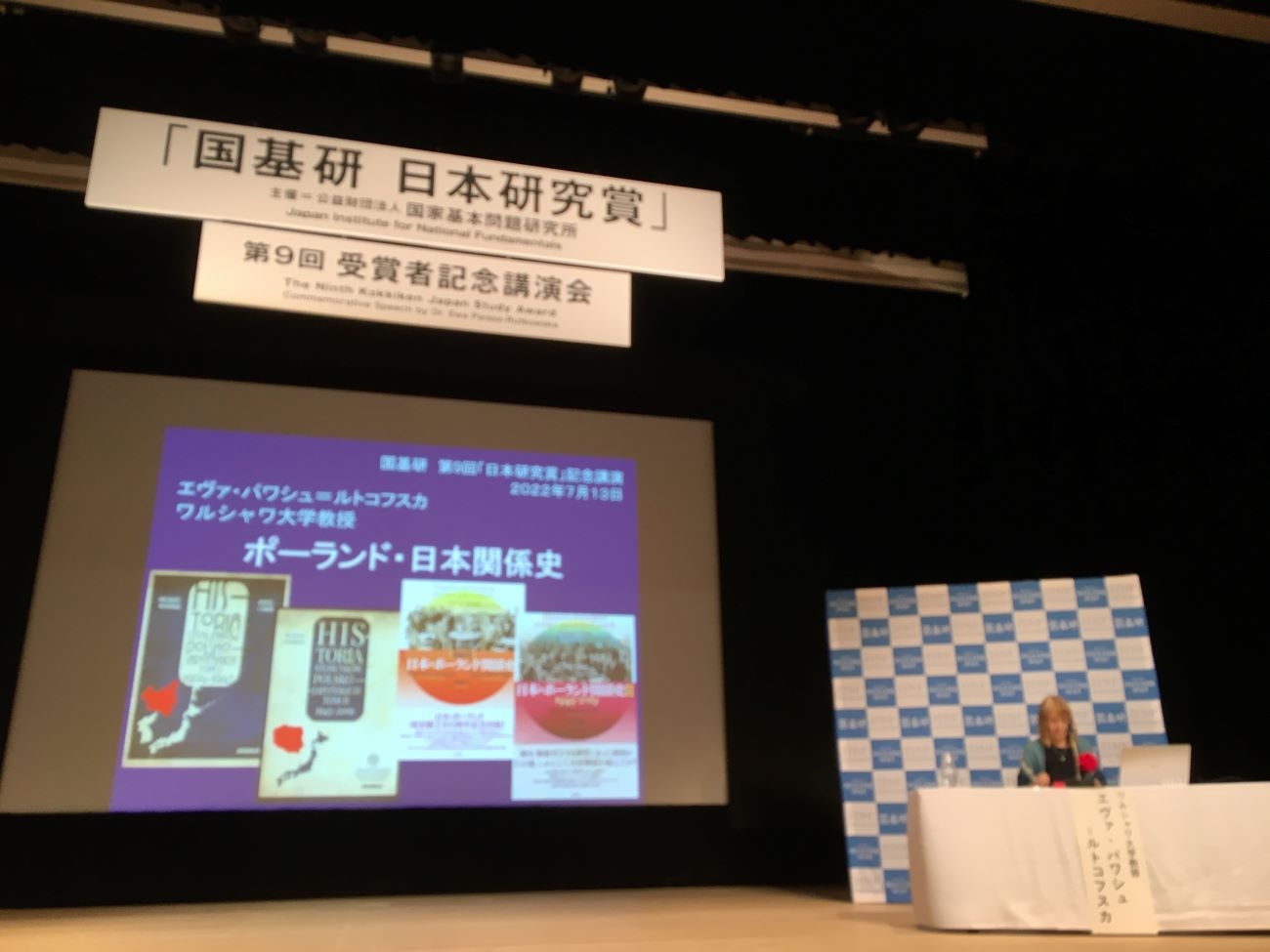 The large Iino Hall and Conference Center auditorium in Uchisaiwaicho, downtown Tokyo, was packed on the afternoon of Wednesday, July 13. But the venue was silent, save for the gentle voice of Ewa Pałasz-Rutkowska speaking in Japanese from the auditorium stage.

Professor Pałasz-Rutkowska is the Chair of Japanese Studies in the Faculty of Oriental Studies at the University of Warsaw, Poland. She is the recipient of the 2019 Japan Foundation Award for lifetime achievement and, in 2015, the Order of the Rising Sun with Gold Rays and Neck Ribbon, among many other recognitions.

This July, she was in Japan to receive the 9th Annual Kokkiken Japan Study Award from journalist Yoshiko Sakurai’s Japan Institute for National Fundamentals (JINF). Professor Pałasz-Rutkowska was on stage in the Iino Hall to deliver the keynote address after receiving the prestigious honor from JINF.

Winning the Japan Study Award is a cause for celebration, to be sure. But the audience at Professor Pałasz-Rutkowska’s talk was silent as they listened to the history of Poland-Japan relations, a subject criss-crossed by the darkness of the twentieth century. Poland was divided and occupied during the past hundred years, and the Polish people lived under brutal Nazi, Soviet, and Polish Communist regimes. The German National Socialists carried out part of their extermination campaign against the Jewish people in Poland. The massacre at Katyn Forest, in Russia, in 1940 was carried out against Polish officers.

Throughout the past century and into this one, however, Japan and Poland have maintained a strong friendship, even when circumstances placed them on opposite sides of the Second World War. Professor Pałasz-Rutkowska mentioned Bronisław Piłsudski, for example, a Lithuanian-Polish researcher who lived among the Ainu and helped Japan in the fight against Imperial Russia during the Russo-Japanese War of 1904-1905.

She also discussed Tadeusz Romer, the Polish ambassador to Japan from 1937 to 1941 who helped thousands of Jewish refugees reach safety from the Nazis via Japan and Japan-occupied Shanghai. Another prominent subject of Professor Pałasz-Rutkowska’s talk was Chiune Sugihara, the Japanese vice-consul in Lithuania who, like Ambassador Romer, issued thousands of visas, in particular for Jewish refugees from occupied Poland. Vice-Consul Sugihara saved those people from certain death in the Holocaust.

Professor Pałasz-Rutkowska also touched on Yasumasa Fukushima and Motojiro Akashi, pioneers of intelligence and espionage in Eurasia who forged close ties with Polish counterparts in their shared fight against the Russian Empire.


Volumes of Work Lauded Through the Award

In remarks on the presentation of the 2022 Kokkiken Japan Study Award, JINF President Yoshiko Sakurai wrote:

Poland and Japan lie on opposite flanks of Russia, and are both vulnerable to the threat posed by that great power. This shared danger has shaped Polish-Japanese relations, and from an early age we have built up a political and military relationship. Professor Pałasz-Rutkowska’s two-volume work on Polish-Japanese relations is a detailed account of more than 110 years of this friendship. It is a peerless achievement in its field.

This year’s award is presented in the midst of Russia’s invasion of Ukraine. It is therefore also a testament to the living relationship between Poland and Japan, our two nations lying across the western and eastern frontiers of Russia.

Between the Lines of Today’s History

The ongoing tragedy in Ukraine, as well as the still-recent assassination of former Prime Minister Shinzo Abe  ), also contributed to the mood of silent and intense attention to Professor Pałasz-Rutkowska’s analysis of global history.

From the audience after the talk, Kazuhiko Inoue, a journalist who has worked extensively to highlight Poland-Japanese friendship past and present, commented on ongoing documentary research in Poland affirming Japan-Poland historical ties. Political commentator Hiroshi Yuasa asked about the extraordinary influx of Ukrainian refugees—now some ten percent of Poland’s population. The shared threat of Russia appears to be a motivating factor compelling Poles to help out Ukrainians, despite fraught relations in the past, Professor Pałasz-Rutkowska replied.

Professor Pałasz-Rutkowska, who studied at Tokyo University in the 1980s under Kokkiken member and distinguished historian Takashi Ito, thanked Professor Ito upon receiving the Japan Study Award. “He has helped me so much over the years,” she said. Her keynote speech even featured a few photographs of her and Professor Ito during their time studying together in Japan decades ago.

Also receiving an award from JINF on July 13 were Sungkyunkwan University Professor Emeritus Lee Dae Keun, for his book on “vested property” taken from former Japanese residents in the Korean peninsula by the American military in the wake of World War II, and JAPAN Forward contributor and Reitaku University Associate Professor Jason Morgan for his intellectual biography of Japanese law-and-society scholar Suehiro Izutaro.

In remarks delivered remotely from South Korea, Professor Lee expressed his sincere gratitude to Yoshiko Sakurai and JINF for presenting him with the award. Professor Lee also added his condolences on the sudden passing of Shinzo Abe.

On stage during the awards ceremony prior to Professor Pałasz-Rutkowska’s talk, Professor Morgan said:

Yoshiko Sakurai notes that the Japan Study Award was founded in 2007, with a gift from Mari Terada, to “inspire researchers in the twenty-first century international community to undertake thorough academic research about Japan — everything from its features, history, culture, and civilization, to politics, the wartime past, and values unique to it. We would be delighted if the Japan Study Award helps promote free and sincere studies on Japan.”

The support that Professor Pałasz-Rutkowska has received from President Sakurai, Professor Ito, and others has blossomed in unexpected ways. For example, The Sankei Shimbun newspaper reported on July 14 that Professor Pałasz-Rutkowska’s daughter, who attended kindergarten in Japan during one of her mother’s dozens of research trips to this country, followed in her mother’s footsteps and now works as an associate professor of Japan studies in Poland.