INTERVIEW | Shinzo Abe: No Country Will Fight Alongside a Defenseless Japan 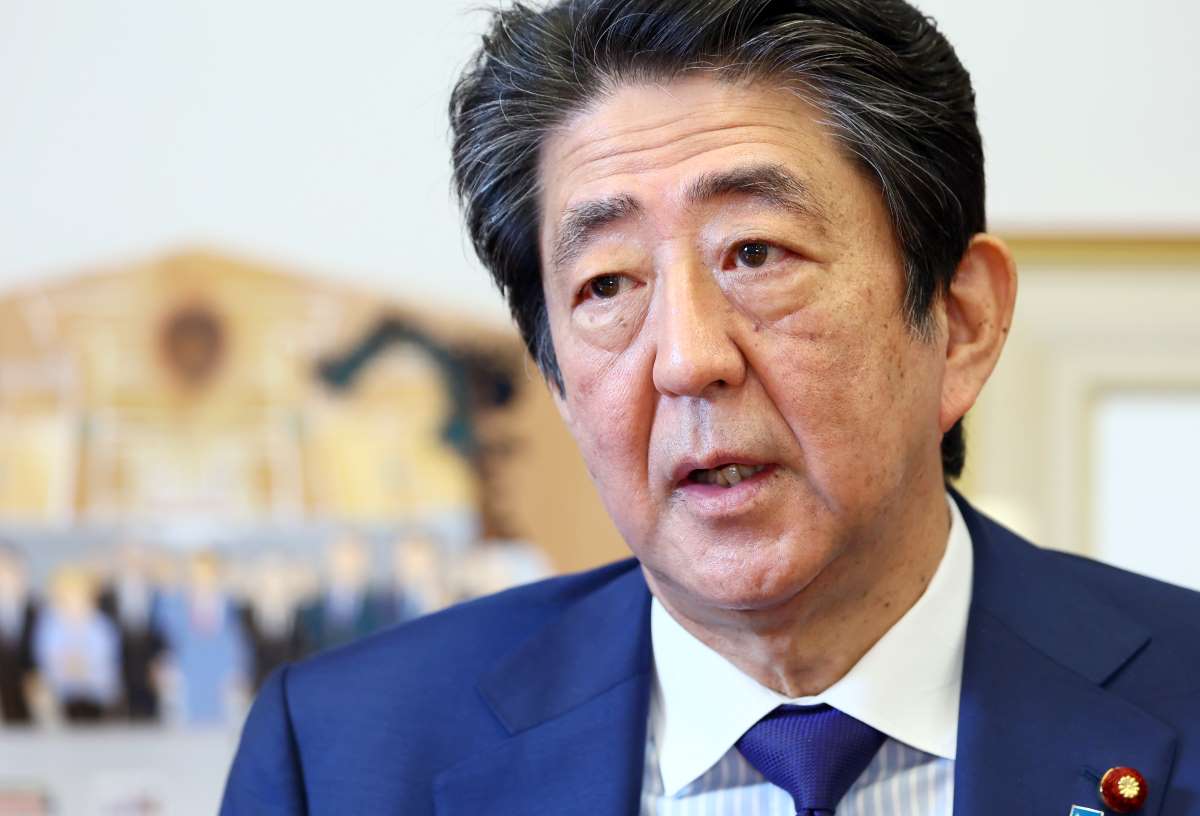 Mr. Shinzo Abe, former Prime Minister of Japan, in an interview with The Sankei Shimbun.

“Japan is no stranger to this military conflict,” said former Prime Minister Shinzo Abe in a March 25 interview with The Sankei Shimbun. The leader of the largest faction of the Liberal Democratic Party (LDP) was discussing Russia’s invasion of Ukraine.

Japan’s geopolitical situation shares points in common with Ukraine’s, he explained. He went further, pointing out the importance of collective security as a lesson for Japan to learn from this situation.

“If Ukraine were a member of the North Atlantic Treaty Organization (NATO),” he said, “Russia would not have invaded. Because no country is directly allied with Ukraine, none will fight alongside it.”

Ukraine has thoroughly resisted the Russian invasion. As a direct result of Russia’s actions, European countries, including Germany, have significantly increased their commitment to defense spending. Pointing to these developments, Abe said, “It is fundamental that we protect our nation through our own efforts.”

Abe acknowledged that the LDP’s pledge in the recent lower house election to increase defense spending by at least 2% of gross domestic product (GDP) is inevitable. He emphasized, “No country fights alongside a nation that is not defending itself.” He also called for Japan to have its own first strike ability to attack enemy military sites.

In response to North Korea’s launch of an intercontinental ballistic missile (ICBM) on March 24, Abe proposed a debate on the nuclear deterrence needed to dissuade Pyongyang from aiming nuclear weapons at Japan.

Excerpts from the interview continue below.


Russia’s actions in Ukraine are responsible for the suspension of talks with Japan.

I had a talk with Ukraine President Volodymyr Zelenskyy in October 2019 during my tenure as prime minister, when we both attended Japan’s imperial enthronement ceremony called Sokuirei-Seiden-no-Gi to proclaim the ascent of Emperor Naruhito. Zelenskyy looked a little nervous at first, but once we started to talk, we soon became comfortable with each other.

As I listened to his online address at Japan’s National Diet this March 23, his demeanor seemed toned down from speeches he had given to other countries.

Russian President Vladimir Putin believes in force and will not hesitate to use it. As was the case during the Cold War between the United States and the former Soviet Union in the postwar era, Putin could not allow NATO to extend its sphere of influence to Ukraine.

I thought that Putin was not an ideologue but a realist. I was surprised that he sent Russian troops beyond the two eastern regions self-proclaimed as “People’s Republics” of Donetsk and Lugansk (DPR and LPR). Pro-Russian groups effectively control the DPR and LPR.

On March 21, Russia announced the suspension of negotiations for a peace treaty with Japan. The Russian invasion of Ukraine had already made it difficult for Japan to continue talks. The breakdown in negotiations was Russia’s fault, not Japan’s.

Japan has no choice but to align with other G7 countries on sanctions against Russia to prevent similar military crises. In my view, Prime Minister Fumio Kishida has exhibited leadership on this matter.

Russia is our neighboring country and a military superpower. Our government will continue its efforts to solve the Northern Territories problem and to conclude a peace treaty, a long-cherished wish of former residents of the islands and their families.

The Russian invasion of Ukraine is not a remote problem disconnected from Japan. Think about the situations surrounding Ukraine and Taiwan. Russia has had a strong influence over Ukraine politically and economically. Moscow has made clear its willingness to ensure security for Russian residents in Ukraine.

Ukraine and Taiwan are similar in that both countries do not have any officially allied nations. And those opposing them, Russia and China respectively, are both permanent members of the United Nations Security Council.

On the other hand, mainland China regards Taiwan as part of itself and does not hide its ambition to unify both countries in the future. Also, there are many mainland Chinese residents in Taiwan.

Chinese leader Xi Jinping may see things differently. Ukraine is a member of the United Nations, recognized as a nation by the international community. However, China insists that its Taiwan problem is a domestic issue. Moreover, only a few more than a dozen countries recognize Taiwan as a sovereign country. Xi must be keeping a close eye on the situation in Ukraine.


Nuclear sharing should not be taboo.

There are lessons Japan can take from the Ukraine invasion.

When our new security laws declaring Japan’s right to collective self-defense in cooperation with its allies were passed under my administration in 2016, critics suspected this would drag us into a war. However, in the present case of Ukraine, the truth has proven to be the opposite.

If Ukraine were a member of NATO, it would not have been invaded by Russia. The current system of alliances has inherent security mechanisms. Recently, European nations like Germany have strengthened their own self-defense capabilities. Moreover, it is fundamental to protect one’s own country through one’s own efforts.

I have referred to the possibility of nuclear sharing in which a nuclear nation shares its nuclear weapons with its allies to increase deterrence. That is because I think we should discuss the reality of geopolitics without the hindrance of current taboos.

Historically, Ukraine had returned the nuclear weapons they inherited from the former Soviet era to Russia under the 1994 Budapest Memorandum. In exchange the security of the Ukrainian homeland was assured by the United State, United Kingdom, and Russia. If Ukraine had kept some of its tactical nuclear weapons, the country might not have experienced what is happening today.

Japan is situated within the broad umbrella of nuclear deterrence based on the Japan-US alliance, which provides an effective deterrence against our neighboring countries who possess nuclear weapons. However, it is essential to consider how we can ensure the certainty of this function.


Raise the cost of an attack on Japan.

North Korea launched an intercontinental ballistic missile (ICBM) on March 24. General Secretary of the Workers’ Party of Korea Kim Jong Un may be thinking about what happened to former Libyan leader Muammar Gaddafi. Gaddafi agreed to give up Libya’s nuclear development program in response to demands of the United States and United Kingdom, which led to the destruction of his country. Kim Jong Un might think that, if Libya had refused the demand, it might have met a different fate.

Therefore, we need to discuss realistic deterrence capabilities to prevent North Korea from ever using nuclear force against Japan.

Deterrence comes in two forms. One is deterrence by denial, for example, an anti-ballistic missile system which can make it physically difficult for the aggressor to achieve his objective.

The other is deterrence by the ability to retaliate and punish, which would make the aggressor hesitate to attack. In short, we need to possess striking power to attack an enemy at its military bases. As for Japan, we need to share the US deterrence capability for punishment and retaliation. Japan’s self-defense capability is insufficient without this shared deterrence.

Understandably, the LDP pledged in the recent lower house election to increase defense spending by at least 2% of gross domestic product (GDP). No country fights alongside a nation that is not defending itself.

I am pleased to see that discussions on constitutional revision are underway in the constitutional review boards of both houses of the Diet. The situation in Ukraine provides an excellent opportunity for a thorough debate on Article Nine, one of the LDP’s four proposed constitutional amendments. (Article Nine renounces war and the threat or use of force to settle disputes.)

To deliver aid to Ukraine from supplies initially intended for use by Japan’s Self-Defense Forces, the Japanese government has revised operational guidelines of the Three Principles on Transfer of Defense Equipment. I think we also need to consider reviewing the policies regarding weapons exports.

(Read the interview articles in Japanese at this link .)