Japan in 2020: Will This Be A Landmark Year in Its Relations with India? 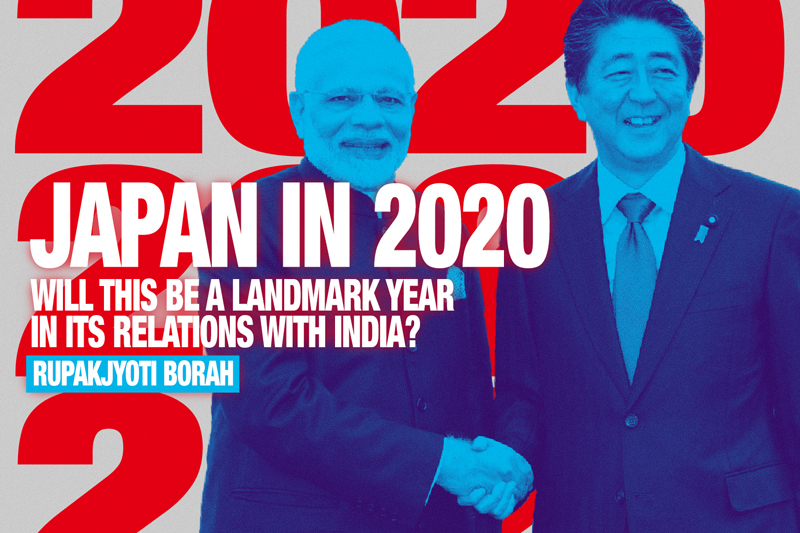 Japan-India relations have had their fair share of ups and downs in 2019.  While the notable successes include the first ever 2+2 meeting between India and Japan, the flip side was that the annual summit between the two countries could not be held, owing to the security situation at the venue of the summit, Guwahati.

Nevertheless, as we enter 2020, what begs the question is where do Japan-India ties stand at the moment?

India and Japan are pooling their resources in the field of infrastructure, as can be seen in Sri Lanka, where India and Japan will hold a 49% stake in the development of the East Container Terminal in the Colombo Port.

Tokyo will be hosting the Olympics later in 2020 and this presents New Delhi with a great chance to learn from the Japanese experience. The two sides are also working towards signing an Acquisition and Cross-Servicing Agreement (ACSA), which will allow them to share military logistics.

In addition, there will be plenty of opportunities for cooperation between the two sides in organizations like the G-20. They also share a common interest in the safety and security of the sea lanes of communication in the South China Sea.

Meanwhile, Northeast India has emerged as a new area of cooperation between Japan and India. For New Delhi, collaboration with Japan means an opportunity to show that it is serious about the development of the Northeast, which has lagged behind other parts of the country.

Under the Modi government, a string of projects have been inaugurated in this part of the country. These include the Bogibeel Bridge and the Dhola-Sadiya bridge — also called the Bhupen Hazarika Bridge — which is India’s longest road bridge. It is important to note that the state of Arunachal Pradesh in Northeast India is claimed by China and, in the past, Beijing had often raised objections when Indian dignitaries visited Arunachal Pradesh.

Recently, Japanese and Indian troops undertook the “Dharma Guardian Exercises” at the Counter-Insurgency and Jungle Warfare (CIJW) School of the Indian Army at Vairengte in Mizoram. The huge Japanese investments in Northeast India (along with Japan-India cooperation in India’s outlying Andaman and Nicobar Islands) show that New Delhi is prepared to trust Tokyo when it comes to its border regions.

At the same time, the Japan International Cooperation Agency has funded two major projects in Guwahati, which include a sewerage and a water supply project.

Tokyo has also funded projects related to the development of infrastructure in the rest of Northeast India, which will help connect Northeast India to Southeast Asia via Myanmar. Japan and Japanese companies already have a big presence in the ASEAN region up to Myanmar. In the wake of political issues with Beijing and the Trump administration bearing down hard on China, Tokyo is scouting for alternative investment destinations.

The two countries seem to have their own priorities at the moment with regards to the China-led Belt and Road Initiative. Japan has been sending mixed messages with regards to the BRI. At the same time, in late 2019, India and China held the second informal summit between Prime Minister Narendra Modi and President Xi Jinping at Mamallapuram, near Chennai in southern India.

In addition, ties in the field of defense have not moved forward. The much-touted US2-I deal between the two sides has not materialized. India is one of the biggest importers of defense equipment in the world, and Tokyo has lost a great opportunity by not relaxing norms for India. New Delhi will not wait, and may source similar military platforms from other supplier countries.

It will also be important to increase the trade levels between India and Japan since they have been languishing for quite a while now. In addition, with India deciding not to join the proposed Regional Comprehensive Economic Partnership for now, Tokyo has quite an uphill battle on its hands, as it had wanted New Delhi to sign on to the RCEP.

The Indian and the Japanese prime ministers will be meeting later in 2020 for their annual bilateral summit, which was delayed in late 2019. This presents both parties with a good opportunity to thresh out the differences between the two sides.

2020 is bound to be a landmark year in the development of Japan-India ties and one that will set the tone for the future of the ties between these two Asian democracies.

Dr Rupakjyoti Borah is a senior research fellow with the Japan Forum for Strategic Studies in Tokyo, Japan. The views expressed are personal.