The Year in Our Stories: Japan's Democracy in Action (Domestic Politics) 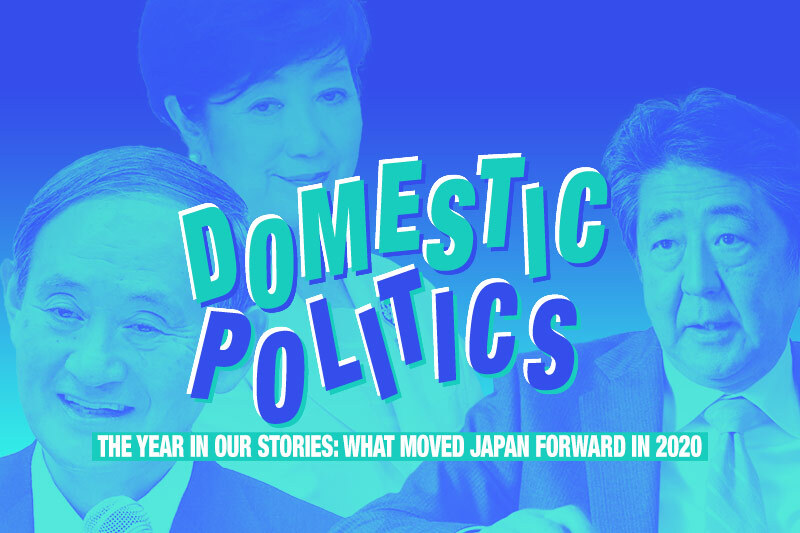 Each day for five days, we are sharing a few of the stories in the categories that dominated our coverage of the at was. news in 2020 through the eyes of our editors. We began with a look at the international friction that clung to the coattails of COVID-19, and then the international cooperation that developed to counter it. Here we look at another feature of the year: How Japan’s democracy moved forward and strengthened despite the pandemic, reassuring the nation and the region as it did so. Please join us.

Like everything else this year, domestic politics was largely dominated by COVID-19.

This held true even at the front of domestic policy early on in the year, when the topic that came to the fore was the fight against infectious diseases.

Come March, the conversation gravitated toward what different local governments could do to fight the spread of COVID-19. For example already in mid-March Tokyo governor Yuriko Koike was calling citizens to avoid going to karaoke, bars and restaurants serving alcohol.

What most people will remember is when Japan entered the state of emergency, which was first called in certain regions, then on April 16 was extended nationwide. The measures called upon everyone to stay home as much as possible, avoid unnecessary outings, and requested restaurants to limit their opening hours. Although it was never an enforceable lockdown, in this country where cooperation on matters of importance to society is valued highly, the effect came very close.

Throughout this period, a key point of discussion was what role the Constitution of Japan and the Self-Defense Force should have in such a period of crisis.

As the State of Emergency stretched into May, we covered what Prime Minister Shinzo Abe’s thoughts were on medical treatment, economic aid, and in general COVID-19 policy in an exclusive interview.

Then finally, Japan exited the State of Emergency in late May, politics coverage was largely over, or so we thought.

Although there was little coverage in the Western media, even during COVID-19 major elections took place in Japan.

Tokyo, the largest city in the world ― larger than many countries in Europe with approximately 14 million citizens just in the Metropolitan area ー held gubernatorial elections. Japanese citizens voted in person in their neighborhood polling places on that day, observing COVID-19 cautionary measures as they did so. On July 5, without major hiccups or risks of infection, Ms. Yuriko Koike, the incumbent governor, stood for election and won in a landslide.

Many attributed the landslide victory to the capacity of Governor Koike of handling the crisis in a city which is the size of a small country.

Just as the rise of new infections during the summer was brought under control and we thought that news would calm down for a while, Shinzo Abe, who had just broken the record as the longest serving prime minister in history, resigned for health reasons.

We covered his final press conference, where Mr. Abe summarized his achievements and his challenges.

Just as people and world leaders on SNS shared their thoughts on Abe’s resignation, some of our commentators analyzed the trends to draw from the achievements of the Abe administration.

The Road to Yoshihide Suga Administration

As Mr. Abe resigned, there was a very quick scramble to select a new party and national leader as soon as possible.

In record time, the ruling Liberal Democratic Party (LDP) set up a specific framework to carry out intra-party elections for a new leader.

Although there were three candidates up for the party leader raceーeach with their own policies, Shigeru Ishiba, Fumio Kishida, and Yoshihide Sugaーit quickly became very clear that Suga had accumulated more support inside the party.

We then took a look at Yoshihide Suga’s background. The son of a strawberry farmer from Akita prefecture, he had served as Chief Cabinet Secretary under Shinzo Abe for eight years.

Suga won with an overwhelming majority in the party leadership race on September 14. He quickly announced his list of cabinet members, which showed a will to embrace the new digital age, as well as a measure of continuity from the Abe administration.

Many international commentators looked intently at what Suga might be able to achieve, both domestically and on the international stage.

Of course, Covid-19 related issues continued to dominate the conversation in domestic policy over the next few months.

At the same, right from his first policy speech on October 26, Mr. Suga made clear that he wanted to drive Japan towards becoming a country with green energy.

Adding substance to his talk, Suga pledged to make the country with the target of zero greenhouse emissions by 2050, and committed a substantial budget toward the goal.

As the political year drew to a close, Tokyo Governor Yuriko Koike showed optimism that Tokyo would host the 2020 Olympics and Paralympics in 2021, and high hopes for Tokyo as an economic center in the future.

As the government gets ready to approve the budget and stimulus for 2021, many have foresee a better year in the coming year.

Of course, there are still some questions which are open going into the New Year. If and when the prime minister calls a snap election, when will that be? Will Japan manage to hold the Olympic and Paralympic games, and what political judgements will that imply?

There is a lot to applaud in the steady functioning of Japan’s democracy in 2020, and just as much to hope for in the coming year. So keep reading our content to find out more!