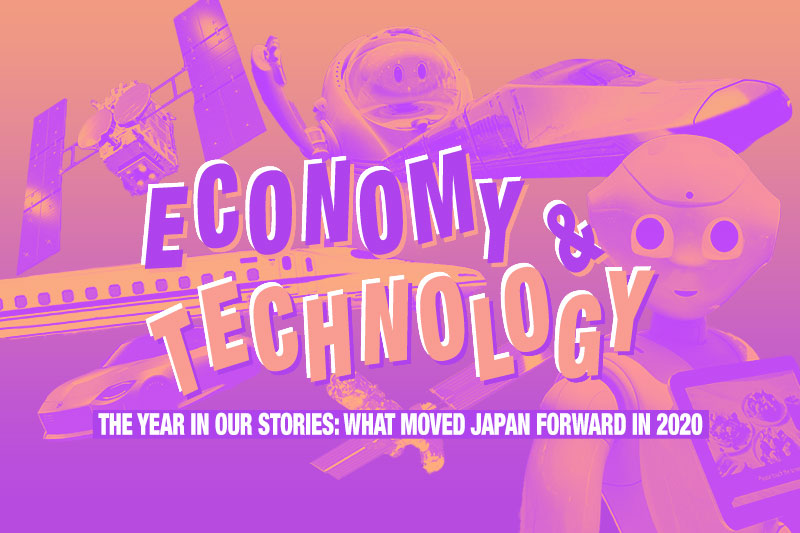 Each day for five days we are sharing a few of the stories that dominated our coverage of the news in 2020. Here we look at what Japan has done to shore up its economy and how, in spite of the pandemic, Japanese technological skills and innovation soared to new heights in space and at home. Please join us.

2020 opened a lifetime ago, at a time when the big news was of Carlos Ghosn’s dramatic flight from Japan, in a real setup of “Ghosn with the Wind.” For the first part of the year, his escape to Lebanon and accusations against the Japanese justice system were monitored with curiosity.

It was also a time of optimism due to the success of private companies like Uniqlo, and infrastructure and public works industries like railways and shipbuilding which benefited from the Abe government’s infrastructure export initiative and assistance program.

That was all about to change.

In March the Bank of Japan Governor sounded the alarm on the impact of the pandemic on the economy, just as many businesses were told to restrict their hours.

Over the following weeks, we considered how the economy would be affected from a variety of angles as the government tried a state of emergency and various other urgent measures to keep commerce flowing, businesses afloat and the population safe.

The hospitality sector of the economy, including tourism, entertainment and dining out, was among the worst hit. We looked at many impacts, from an interview with the head of All Nippon Airways (ANA) to how some foreigners tried to take advantage of economic distress of small businesses in the sector.

The reality check came in August, when the government published the GDP data for the first financial quarter of the year, showing the biggest plummet in postwar history.

As the summer turned into autumn, several measures were contemplated to support the economy, including the now-infamous “GoTo” campaign and the re-start of business travel in and out of Japan with a limited number of countries and new conditions.

There were exceptions, of course. Nintendo, the company behind the popular video game Animal Crossing: New Horizons, showed resilience and creativity during the pandemic.

And in the end, despite the pandemic-battered economy, Japan seems to have fared better than most other countries.

If the pandemic was bad for the economy, it lit a fire of innovation in the research and scientific communities, especially regarding how to fight COVID-19.

Early on, in the spring months, researchers in Japan frantically searched for domestically approved drugs to help in the fight against the virus. Avigan in particular gained a lot of attention as a possible course of treatment.

We covered in several articles some of the main questions readers had about the virus, treatments, and the vaccine.

It was a period of fervent debate domestically over the best health strategies for Japan. Nobel laureates Dr. Tasuku Honjo and Dr. Shinya Yamanaka’s views helped shape public opinion, and we learned much from an exclusive interview with Dr. Ryuichi Morishita:

As vaccine candidates were approved abroad in early December, conversation in Japan pivoted toward how to make a domestic rollout as smooth as possible.

And with it, the pace for development of a safe, effective domestic vaccine also picked up.

It was a year when technology thrived. Changes planned before the pandemic and unveiled during 2020 reminded us that science doesn’t stop, even during a health crisis.

The Japanese supercomputer Fugaku, developed by Fujitsu Ltd in Kobe and RIKEN Center for Computational Science, was supposed to be unveiled in April 2021, but the timeline was pushed forward a year to help fight COVID-19. Winner of the Top500 fastest supercomputers in the world, Fugaku has helped crunch numbers to simulate the spread of the virus, helping us understand the effectiveness of social distancing and facemasks.

Robot technology in Japan was showcased by the Tokyo Metropolitan Government in September in one of several events designed to show how AI technology can play a role in society today.

In everyday life, establishments were also quick to embrace technology to foster “life with corona”, using AI and thermography cameras, for example, to monitor the body temperature of visitors.

CEATEC 2020, one of the largest technology events in the world, this year centered the theme around “life with corona”, and thereby showcased several ways in which technology can help us in the fight against the virus.

Japan is still a mass-transit country, though, and the new N700 Tokaido Shinkansen was unveiled in June. In the fall, the press took a sneak-peek inside the Linear Chuo Shinkansen.

Funnily enough, while many sought to ride the wave or adapt, the pandemic also became a time to accelerate some of the change started in pre-pandemic times. In keeping with the demand for greater efficiency, the Yoshihide Suga administration stepped up efforts to digitize the government functions in the latter part of the year.

Reflecting the increasing worldwide awareness of the problem of climate change, in the final part of the year the government shifted its economic agenda also towards setting zero greenhouse emissions target by 2050, by unveiling several economic incentives in this sector.

Reaching for the Stars

Japan moved forward in 2020 with spectacular advances in space, ending the year by sending astronaut Soichi Noguchi, along with three American colleagues, to the International Space Station (ISS) on board Resilience, the first privately developed spacecraft in history.

But manned space travel was not the only story. Japan’s cargo transport workhorse, Kounotori, successfully completed its last supply mission to the ISS in August, as Japan prepared for new challenges in supplying a lunar space station, with promises of putting a Japanese on the moon itself within 10 years.

But the heartwarming story was the thrilling success of the tiny Hayabusa2, which delivered its pristine samples of asteroid Ryugu to earth on December 6 and showed that Japan can become a pioneer of space science if it continues its successes.

Noguchi, as if speaking for all of Japan’s space exploration teams, left us with a final thought about the year of pandemic, noting: “I hope to show by example the power of recovering from adversity by not giving up on space exploration.”