The Year in Our Stories: International Cooperation Shores Up 'Free and Open Indo-Pacific' 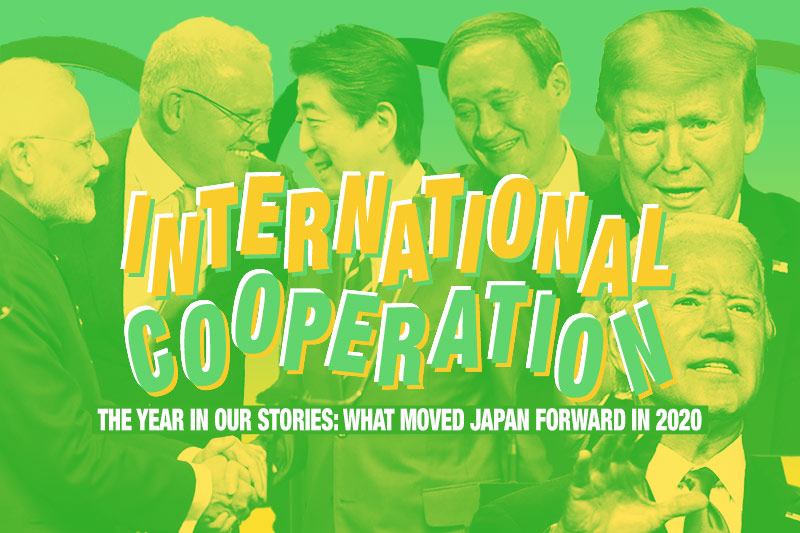 ~In Japan's broader world, rapid spread of the COVID-19 pandemic prompted many countries to demand answers that never came. Japan’s reaction and theirs: seek stronger alliances with like-minded countries.~

As 2020 comes to a close, we are reflecting on the stories that moved Japan forward this year. While SARS-Cov-2 the virus that causes COVID-19 dominated every facet of our news and daily lives from the end of January and is recounted here and here, there were some very good news stories.

Each day for the next five days, we will be sharing a few of the stories in the categories that dominated our coverage of the news in 2020. We began with a look at the international friction that clung to the coattails of COVID-19, from Japan's perspective. Here we look at another consequence of the pandemic: how Japan, its neighbors and allies stepped up their collaboration to achieve new levels of international cooperation for the security and development of the region. Please join us.

The year 2020 opened to a celebration of Japan's longest standing international security agreement – the Treaty of Mutual Cooperation and Security between Japan and the United States, signed on January 19, 1960. Its durability is an important achievement as this agreement serves as a major pillar of regional security. For Japan, it also set the tone for a year of vigorous bilateral and multilateral agreements and other cooperative efforts with allies and friends, in the region and beyond.

Simultaneously, Japan was enjoying international support as it geared up for the Tokyo 2020 Olympic Games, having just opened its environmentally attuned New National Stadium and announcing the Games' inclusive motto:

The Games were postponed soon thereafter, but with global hope that they would take place a year later.

The year saw bilateral efforts on global environmental goals as well, as India and Japan shared methods to shore up local support for clean air initiatives.

But one of the biggest boosts in a show of global cooperation came in Prime Minister Suga’s first speech to the United Nations, in September, in which he announced Japan’s commitment to help those countries who need it most in the fight against the virus.

Cooperation in the Face of Necessity

As COVID-19 took hold of the global conversation, it was calls for Japan's assistance to nearby countries including the Pacific Islands and Indo-Pacific that previewed the agenda -and partnersーfor the remainder of the year.

Japan stepped up its existing programs for infrastructure cooperation  and multilateral coordination, including India and the U.K., with the Pacific Island nations

In Japan's broader world, rapid spread of the COVID-19 pandemic prompted many countries to demand answers that never came. Japan’s reaction and theirs: seek stronger alliances with like-minded countries. Our writers analyzed it this way.

And as our attention pivoted to China's aggressive territorial grabs and cross-border incursions, so did our thoughts turn to the efforts of democracies with interests in the region to deter disruption of the status quo.

A growing number of countries reconsidered China's control of their telecommunications systems. Sharing information and concerns, governments in several regions stood together against China’s attempt to control the global market.

One of the greatest impacts came from the deeply saddening loss of freedoms in Hong Kong earlier in the year. Like-minded countries sought new agreements across the Indo-Pacific and with countries like the U.K. that share interests in the region.

As a counter to China and the upcoming Brexit, trade agreements were negotiated with the U.K. (they had already been negotiated with the E.U.), adding economic ties to the growing sense of shared values in the region between Tokyo and London and Europe as a whole. Our editors and contributors saw it this way:

In the region, ties were strengthened with strategic partners and quasi-allies Australia and India, both to counter China's economic and territorial aggression and to shore up shared values. The fortified relationships serve to further the mutual goal of preserving a "free and open Indo-Pacific", an initiative of former Prime Minister Shinzo Abe, and now promoted by the Quad countries (Japan, the U.S., India and Australia). Learn more here:

Japan took several steps forward to firm ties with its Southeast Asian neighbors in the Indo-Pacific as well. These countries have been beneficiaries of Japan’s ODA and in 2020 also benefitted from the Japanese government's initiative to diversify supply chains against the problems encountered with China after the coronavirus outbreak. They are also among the first countries to benefit from the lifting of Japan's COVID-19 travel restrictions that stopped nearly all immigration during critical periods of the pandemic. Providing symbolism on top of the substance, Prime Minister Suga's first state visit was to Vietnam, the first country to benefit from eased travel rules.

Vietnam, as chair of ASEAN in 2020, also provided Japan an entrée for closer ties with the ASEAN countries, culminating in bilateral and multilateral agreements, including the RCEP (Regional Comprehensive Economic Partnership), despite concerns about China’s participation.

Energizing the Quad - Plus

The core of Japan’s approach to the Indo-Pacific focuses on the diamond countries of the Quad, the U.S., India, and Australia, which this year advanced their broad approach to maintaining free and open sea lines of communication. Economic harassment, together with heightened concerns over regional security and territorial integrity prompted all four democracies to participate in the Malabar Exercises. For the first time, Australia moved beyond its concern over China's reaction, to join Japan, the United States, and India in military exercises aimed at promoting interoperability and communication between their respective defense services. Read it here:

Japan and India also concluded a new logistics treaty and carried out bilateral and trilateral (with the United States) the  Japan-India Maritime Exercises (JIMEX) 20 naval exercises. Learn here why the new logistics treaty between the two is a significant step for both.

But the regional agreements didn’t stop there. Australia and Japan also took the step of negotiating the Reciprocal Access Agreement, Japan’s first military exchange pact since the 1960 Status of Forces Agreement with the United States. Read why our editors and contributors think it’s so important.

The importance of the Quad was demonstrated by foreign minister-level meetings held in Tokyo in October, the first in-person meetings of leaders of world democracies since the pandemic took hold of the globe. By this time, other countries were also signalling their shared values of democracy and freedom in the Indo-Pacific region, and calls grew to expand into the Quad-plus.

What new levels of cooperation will be made possible by this year’s achievements?? There is hope for the New Year.